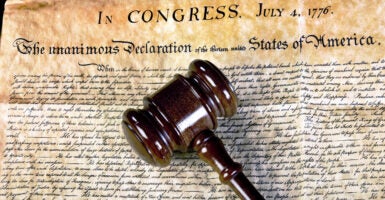 "We call on states, counties, and local communities to form their own 1776 commissions to advance this great work of American renewal as we prepare for the 250th anniversary of the Declaration of Independence," the 1776 Commission says. (Photo illustration: Getty Images)

The 1776 Commission reconvened Monday to voice opposition to a federal regulation pushing schools to promote critical race theory, and to call for states and localities to establish their own similar panels to promote accurate American history.

It marked the commission’s first meeting since being abolished by President Joe Biden as a presidential advisory panel four months after President Donald Trump created it.

“Lastly, recalling the long history of citizen participation in our civic life, we call on states, counties, and local communities to form their own 1776 commissions to advance this great work of American renewal as we prepare for the 250th anniversary of the Declaration of Independence in July 2026,” the commission said at the end of a one-page statement following its meeting at the Hillsdale College campus in Washington.

The Daily Signal first reported last week that the 1776 Commission would reconvene despite having no connection to the U.S. government and that it opposed the Biden Department of Education’s proposed regulation to prioritize federal K-12 funding for school systems that teach critical race theory.

“We are concerned that the U.S. Department of Education’s proposed rule defining priorities for the American history and civics education programs, whether as critical race theory or under the misleading name of ‘antiracism,’ actually encourages and seeks to direct federal funds to the teaching of racial discrimination in America’s elementary and secondary school systems,” the commission said in the written statement, adding:

This proposed rule should be withdrawn, and individual states should oppose any such race-based pedagogy as part of their curricula, especially if that curricula is imposed by the federal government.

The Constitution leaves education to the states and localities and denies the federal government any authority to impose national curriculum standards. The federal government should not circumvent this obstacle by using federal funding to entice states and localities to adopt what it wants taught in the nation’s schools. We learned from the failed Common Core experiment that one-size-fits-all national models are a blueprint for trivializing and mechanizing learning.

Instead, we encourage a genuine civics education that will rebuild our common bonds, our mutual friendship, and our civic devotion and eagerly look forward to the forthcoming release of curricula designed in the true spirit of 1776.

Critical race theory is a theoretical framework contending that individuals either are oppressed or are oppressors, based on their skin color.

The Education Department’s proposed rule states that American history and civics should reflect the role of diversity in the nation’s democracy, as well as the consequences of slavery.

“This acknowledgement is reflected, for example, in The New York Times’ landmark ‘1619 Project’ and in the resources of the Smithsonian’s National Museum of African American History,” the Education Department proposal states. It goes on to say that “schools across the country are working to incorporate anti-racist practices into teaching and learning.”

Biden disbanded the 1776 Commission on Jan. 20, his first day in office.

The commission issued a report in January aimed at creating consensus on historical facts of America’s founding, the Declaration of Independence, and the Constitution. The report also focuses on bleaker parts of U.S. history such as slavery and restriction of voting rights to white males.

Activists and commentators on the left were highly critical of the commission’s report. The Biden White House removed the report from the WhiteHouse.gov website.