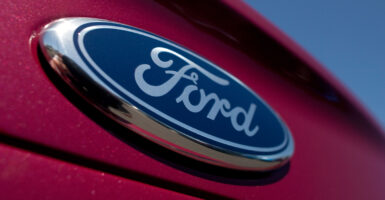 In his letter resigning from the Ford Foundation board in 1977, Henry Ford’s grandson conveyed “respect for the potential for the foundation’s good.” He also thought it was straying too far from the free market principles that make philanthropy possible. Pictured: The Ford Motor Co. logo is seen on the Ford Fusion at the Serramonte Ford dealership on April 26, 2011, in Colma, California. (Photo: David Paul Morris/Getty Images)

Richard W. Graber is chairman of The Philanthropy Roundtable and president and CEO of The Lynde and Harry Bradley Foundation.

Recently, the Ford Foundation announced plans to provide $1 billion in funding toward social justice programs, an extension of the $1 billion it handed out in 2015. The resulting press coverage, including a profile of its president on “60 Minutes,” was effusive.

Ford is not alone in its philanthropic wokeism. Many other large foundations have followed suit. The Mellon Foundation, one of the largest funders of the arts and humanities, is now prioritizing social justice in all its grant-making. The Rockefeller Foundation too is committing $1 billion over the next three years to “catalyze a more inclusive, green recovery from COVID.”

While well-intentioned, there has been almost no scrutiny of grant-making that supports social justice activism. Have the billions of dollars spent on it resulted in greater equity and quality of life for those it purports to help?

To be clear, a diverse range of philanthropies are supporting tremendous organizations with noble causes. America’s ideals allow everyone from the average citizen to the wealthiest foundation to fund what they choose. And certainly, charity should continue to help the most vulnerable in society.

The concern, though, is philanthropy that singularly looks at grant-making through a lens that judges people by their gender and ethnicity both sets America back and undermines the principles of free enterprise that have improved far more lives than any government or social justice program.

Take, for instance, grant-making efforts that increase regulatory burdens on job creators. Or the funding of advocacy groups associated with last summer’s civil unrest, severely damaging small businesses in underserved communities. Or grant-making that sends the dispiriting message that not everyone is capable of being hired on their own merit.

Further, such efforts are antithetical to the free market beliefs of these foundations’ namesakes, who are the reason they exist in the first place. Henry Ford, John D. Rockefeller, and Andrew Mellon all embraced the free market principles that made it possible to invent, produce, fuel, and finance the transportation industry. That, in turn, enabled millions of Americans to be more upwardly mobile and generated limitless possibilities in innovation.

In his letter resigning from the Ford Foundation board in 1977, Henry Ford’s grandson conveyed “respect for the potential for the foundation’s good.” He also thought it was straying too far from the free market principles that make philanthropy possible.

“The foundation is a creature of capitalism—a statement that, I’m sure, would be shocking to many professional staff in the field of philanthropy,” he stated, and went on to say “that the system that makes the foundation possible is very probably worth preserving.”

In the decades since Ford wrote that letter, about 2 billion people worldwide have been lifted out of starvation and poverty. That feat is nothing short of a miracle, attributable to the global rise in ideas related to freedom and free markets. Research substantiates this, showing that the more economically free a country is, the greater its standard of living.

Former President Barack Obama himself has agreed, stating, “We don’t dispute that the free market is the greatest producer of wealth in history—it has lifted billions of people out of poverty.”

America is the most prosperous country in the world because liberty and the rule of law are its foundation. These ideals were once grossly untrue for many in our society, a deep stain on the country’s past. But we’ve made tremendous progress toward gender and racial parity in part because free markets create the conditions for anyone to succeed, regardless of background.

As Sen. Tim Scott highlighted in his response to President Joe Biden’s recent congressional address, “just before COVID, we had the most inclusive economy in my lifetime. The lowest unemployment ever recorded for African Americans, Hispanics, and Asian Americans. The lowest for women in nearly 70 years. Wages were growing faster for the bottom 25% than the top 25%.”

Many statistics bear this out. Among ethnic groups, Asian Americans have the highest median income in America, and Hispanic Americans are wealthier here than nearly anywhere else in the world.

Women, too, have made rapid economic gains under the free market system. In America’s 50 largest cities, single females own more homes than do single men. They control more than $10 trillion in U.S. household financial assets, and continue to have the best opportunities in the world for female entrepreneurship.

Younger black Americans are increasingly becoming entrepreneurs. According to a report on small business, 22% of African American small business owners are millennials, nearly twice as many as in the general millennial population. Encouragingly, the number of firms owned by black women increased 50% from 2014 to 2019.

It is curious then that major foundations are committing staggering levels of funding to efforts that sound good, but in reality make it harder to start or maintain a business, value identity over initiative, and perpetuate the false, defeatist narrative that America is a land of racism, not opportunity. Such ideology detracts from how far we’ve come as country and how much farther we can go if we unite behind principles that truly create parity and prosperity.