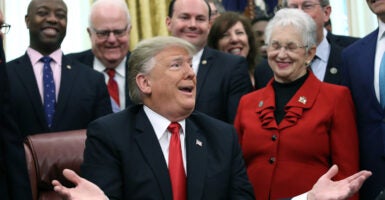 President Joe Biden arbitrarily canceled his predecessor's Executive Order 13980, which required agencies that issue regulations with criminal penalties to “be explicit about what conduct is subject to criminal penalties and the 'mens rea' standard applicable to those offenses.” Pictured: Then-President Donald Trump speaks at the signing of a criminal justice reform bill at the White House on Dec. 21, 2018. (Photo: Win McNamee/Getty Images)

President Joe Biden has been moving at breakneck speed to undo every policy of his predecessor that he can, but he seems not to be giving any thought to whether the underlying policy is good.

If former President Donald Trump made it, Biden will unmake it—even if he later has to remake it, as in the case of recently resumed border wall construction.

Among the orders worth retaining that Biden nonetheless axed is Executive Order 13980. That order required agencies that issue regulations with criminal penalties to “be explicit about what conduct is subject to criminal penalties and the ‘mens rea’ standard applicable to those offenses.”

That Latin phrase, mens rea, means “guilty mind” and refers to the part of a criminal law that specifies what level of criminal intent is required to violate it: knowing, willful, premeditated, etc.

The order recognized that executive agencies have promulgated “thousands of regulations, creating a thicket of requirements that can be difficult to navigate,” and sought to make sure that all regulatory criminal laws are “clearly written so that all Americans can understand what is prohibited and act accordingly.”

The goal was to spare Americans from unknowingly and unintentionally violating arcane laws and suddenly finding themselves branded as criminals and landing in federal prison.

But we were not alone. The order was a victory for criminal justice reform advocates of all political persuasions. The National Association of Criminal Defense Lawyers, the American Civil Liberties Union, the Charles Koch Foundation, the American Conservative Union, and many other groups have been urging the government to clear up the mess of criminal laws that make it impossible for Americans to understand what the law requires and that can end up being traps for the unwary.

If Biden had a strategy beyond “undo everything Trump did,” then this reform ought to have been saved.

Mens rea reform is a big deal to reform advocates on both the left and right because it gets at the heart of what it means for the law to do justice.

If you start from the proposition that the criminal law should punish only those who violated the law with the intent to do something wrong or who act recklessly in the face of a known danger, it follows that you shouldn’t brand someone as a criminal and send him or her to prison if they violate the law accidentally.

When the latter happens, civil or administrative penalties, or tort remedies, are available and are a more appropriate way of addressing any harm caused.

Examples of the injustice caused by inadequate mens rea protections abound. Consider the case of Lawrence Lewis, of whom we’ve written before.

He was chief engineer of a military nursing home in Washington, D.C., and in that capacity, he was responsible for getting rid of overflow sewage in the hospice ward, a problem that happened periodically and endangered the health of the facility’s residents.

He had been trained to reroute the sewage into a drainage pipe long thought to connect to the sewer. Although he didn’t know it, the storm drain emptied into a remote part of Rock Creek, which ultimately connects with the Potomac River.

Lewis had no intention to harm anyone (quite the contrary, in fact) and had no idea that what he was doing was illegal, but the government prosecuted him for violating the Clean Water Act, a law that had no mens rea requirement.

Although he ultimately pled down to a misdemeanor to avoid jail time, he now has a criminal record. That’s not justice.

By rescinding Trump’s order, Biden paves the way for more morally innocent, unsuspecting Americans to be caught up in the criminal justice system. One assumes—or at least hopes—that this was not Biden’s intent, but if it wasn’t, then he ought to have given a little more thought before he wiped away this particular executive order.

In the meantime, Congress can and should fix this problem by passing permanent reforms that will rein in the government’s tendency to criminalize everything.

You won’t find justice in a law that criminalizes an accident. It’s time we get rid of those.