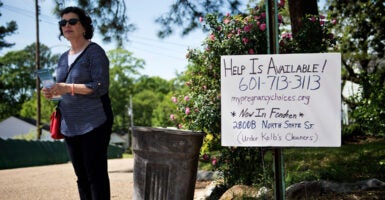 The Supreme Court agreed Monday to hear a Mississippi case challenging the constitutionality of that state’s 2018 law prohibiting abortions after 15 weeks except in cases of medical emergency or when a severe fetal abnormality is detected.

The high court’s announcement that it will hear arguments in Dobbs v. Jackson Women’s Health came after it considered the case in conference no fewer than 12 separate times.

The ramifications of Dobbs, to be argued nearly 49 years after the Supreme Court legalized abortion on demand in Roe v. Wade, promise to reverberate for some time.

In reporting on the high court’s order Monday, mainstream media outlets clutched their pearls and unsurprisingly characterized the decision to hear the case as portending a massive rollback of reproductive rights.

Pro-life conservatives everywhere can only hope.

Mississippi raised three issues on appeal, including whether abortion providers have third-party standing to file lawsuits on their own behalf and on behalf of their patients challenging laws related to the right to an abortion.

The state also asked the Supreme Court to consider whether the validity of its law should be analyzed under the “undue burden” standard articulated by the court in 1992 in Planned Parenthood v. Casey (a case that reaffirmed but modified the constitutional right to an abortion that the court devised in its 1973 decision in Roe v. Wade) and/or under the “balancing of benefits and burdens” standard as laid out by the court in 2016 in Whole Woman’s Health v. Hellerstedt.

Mississippi filed its appeal before last year’s Supreme Court decision, June Medical Services v. Russo, a case in which the high court ruled that a law requiring abortion doctors to have admitting privileges at nearby hospitals constituted an “undue burden” on a woman’s right to get an abortion.

Whole Woman’s Health was, according to Chief Justice John Roberts’ concurring opinion in June Medical, a deviation from Casey’s “undue burden” standard. So, despite the lack of an explicit agreement to take up the issue, the Supreme Court most likely will have to restate that standard as the one it will apply in reviewing Mississippi’s law.

Some scholars believe the Mississippi case is the perfect vehicle to overturn Roe v. Wade and its progeny, including Planned Parenthood v. Casey. It’s certainly the best opportunity so far that the court has had to do so.

Dobbs is also the first major abortion challenge heard by the Supreme Court since the newest justice, Amy Coney Barrett, joined the eight other justices.

In deciding to grant the petition in Dobbs, the court indicated it will consider only one of the questions raised by Mississippi in its appeal, one that is both simple and monumental: Are all prohibitions on elective abortions before the child is viable outside the womb unconstitutional?

The court is set to hear the Mississippi case during its next term, which will begin Oct. 4. As with all abortion cases, this one will be an opportunity for the justices to revisit Roe v. Wade. It also is the first abortion case to be considered by the court since Roe that involves a gestational age limit.

The States may, if they wish, permit abortion on demand, but the Constitution does not require them to do so. The permissibility of abortion, and the limitations upon it, are to be resolved like most important questions in our democracy: by citizens trying to persuade one another and then voting.

American sentiment is behind continued limitations on abortion, as revealed in an NPR/“PBS NewsHour”/Marist poll in 2019. That poll found that only 29% of Americans say abortion should be allowed after the first 13 weeks of pregnancy.

Perhaps the court will take this opportunity to reconsider Roe v. Wade and to see it for what it was—an unwarranted and unwise power grab in which the court crafted a “constitutional” right to abortion out of thin air.

Overturning Roe would return abortion policy to the states where it belongs—and to the democratic process in which Americans debate the morality of abortion and their elected state representatives decide what citizens of their state can and cannot do.