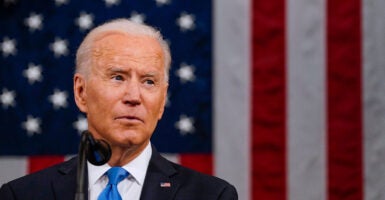 President Biden, pictured addressing Congress on April 28, has a habit of taking credit for the accomplishments of others while denying responsibility for the things over which he does have control. (Photo: Melina Mara/Pool/AFP/Getty Images)

Presidents aren’t supreme beings imbued with the power to dictate economic conditions, pandemics or international events. We give them far too much credit and blame for the vagaries of the world.

That said, there are some things that presidents do have the power to influence. The location of MLB’s All-Star Game, for instance, is not Joe Biden’s bailiwick. The economic recovery is. The COVID-19 downturn wasn’t an organic event precipitated by unforeseeable underlying economic factors. It was an event created by state lockdowns, coupled with widespread consumer fear. So, with lockdowns easing and vaccines entering arms, a vibrant bounce-back should be a slam dunk for the president.

Instead, Biden couldn’t resist the opportunity to stuff expensive, technocratic, completely unrelated agenda items into his “rescue” packages. And disincentivizing work and investments, threatening to raise taxes and energy prices and pumping trillions into the economy tend to dampen growth.

Economists expected the country to add about 1 million jobs in April, but we came up 800,000 jobs short. March’s gains were also revised down another 140,000. Leftist pundits and wonks, as is their wont when Democrats hold power, were “perplexed” by the bad numbers. And Biden is simply in denial. “There’s been a lot of discussion since Friday’s report that people are being paid to stay home rather than go to work,” the president explained. “We don’t see much evidence of that.”

There are 7.5 million jobs available in the United States, but only 270,000 were filled. And Americans are getting $300-a-week bonus checks to stay home. As Bank of America economist Joseph Song noted, even those making $32,000 a year would get a raise by going on unemployment. That seems like evidence.

“I want to put today’s job report in perspective,” Biden also explained. “Quite frankly we’re moving more rapidly than I thought we would.” So, Biden expected a bigger-than-800,000 miss on jobs? That’s quite the admission. Even as he was alleging that the paltry job numbers were outperforming his expectations, Biden was making the non-falsifiable claim that the situation could be improved by passing more colossal spending bills. When the economy bounces back, Democrats will credit spending. When stimulus plans underachieve, Democrats blame it on a lack of spending. Convenient.

How much will be enough? It’s unknown. Right now, Biden wants to spend another $4 trillion. Today, we learned that April consumer prices had “unexpectedly” jumped 4.2% from a year ago. Some economists argue that this is all transitory. Maybe. What would another massive left-wing goodie bag do for inflation? Biden doesn’t seem to care.

What else can the president control? Nationalizing elections isn’t the president’s job. Controlling the southern border is. Yet, when Biden isn’t blaming Donald Trump or seasonal migration patterns for the crisis on the border, he’s pretending nothing is wrong.

There were 178,622 apprehensions on the border in April, according to Customs and Border Protection—the highest total in more than two decades. To put the number in context, last April, there were 17,106 apprehensions.

The president can’t control the movement of migrants outside our borders. But Biden helped trigger this crisis by, among other things, undoing the Trump administration’s “public charge” policies that barred immigrants from participating in welfare programs and rolling back the “remain in Mexico” policy that impelled migrants to wait in Mexico while their claims were being adjudicated. Moreover, most modern Democrats talk about laws that govern illegal immigration and border control as inherently racist and unnecessary. All of this incentivizes the anarchy we’re seeing at the border.

Demanding we wear masks isn’t the president’s job. Conducting foreign policy is. And since Biden took the reins, the Middle East has dramatically destabilized.

As Hamas rained down rockets on Israeli civilians (and on their own people), White House press secretary Jen Psaki was informing the nation that the president had “directed his team to engage intensively with senior Israeli and Palestinian officials” and is in “support of de-escalation” while also “candidly” telling off Israel on “settlements.”

Treating Hamas and Israel as morally equivalent international actors only generates more violence. This is the same Biden administration that restored $235 million in U.S. aid to the corrupt and authoritarian Palestinian Authority without any preconditions that they refrain from terrorist activities or institute democratic institutions.

The White House is bailing out Iranian mullahs, who will almost surely divert some funding to their proxy terror army in Gaza, which will in turn use it—not to buy vaccines or build homes, but to assemble hundreds of rockets that will be fired at Jewish cities. It’s clear that forces in the region understand that Biden would sell out Israel and Sunni Arab nations for a deal with Iran. And they all act accordingly.

Our president has a habit of enthusiastically taking credit for the accomplishments of others—as he does with vaccine production and distribution—while denying responsibility for, or botching, the things over which he does have control.