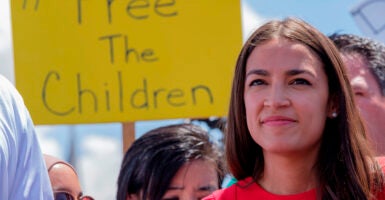 An “agitated and animated” Rep. Alexandria Ocasio-Cortez, D-N.Y., began “pointing and screaming” at a female agent during a 2019 visit to a Border Patrol station in El Paso, Texas, according to government documents.

“I as a woman of color do not feel safe here,” Ocasio-Cortez told the female agent, according to an official memorandum that summarizes her comments, sometimes using quotation marks.

Ocasio-Cortez said the Border Patrol agent—whose name is redacted in the U.S. Customs and Border Protection documents—used her cellphone to take a photograph of herself with the New York congresswoman in the background.

Ocasio-Cortez went on “to personally admonish and berate” the agent and to insist that “that woman cannot work with children,” according to CBP memos resulting from a Border Patrol investigation of the incident.

Details of the episode are contained in nine pages of documents regarding the July 1, 2019, visit by Ocasio-Cortez and 13 other House Democrats to the Processing Command Center of the federal government’s El Paso station. At the time, Ocasio-Cortez had been in Congress just over six months.

The Daily Signal obtained the documents through a Freedom of Information Act request to Customs and Border Protection, which operates the facility and other stations along the U.S.-Mexico border.

Ocasio-Cortez tweeted later that day that a Border Patrol officer “attacked” her.

Two other Border Patrol agents also said they didn’t see their colleague take any selfies, according to the documents.

The Daily Signal emailed Ocasio-Cortez’s Capitol Hill office for comment Monday, sending messages to two spokespersons as well as the main address for press inquiries. No one from the office had responded by 4 p.m.

The Daily Signal asked Customs and Border Protection on Monday for any updated information on the matter, such as personnel hearings or disciplinary actions. CBP also did not respond immediately.

Most of the House members who visited the El Paso station were, like Ocasio-Cortez, part of the Congressional Hispanic Caucus.

The lawmakers’ visit came during the emotionally charged period in which border officials separated children from adults, including their own family, after they unlawfully crossed the border from Mexico.

Ocasio-Cortez chose to skip much of the lawmakers’ tour of the facility and instead visited with female illegal immigrants in a separate area, according to the documents.

“During the briefing, Congresswoman Alexandria Ocasio-Cortez began loudly knocking on the window of the processing area and alleged that a Border Patrol Agent (BPA) was taking a ‘selfie’ photo of her,” says one memo, dated July 2, 2019.

Customs and Border Protection redacted the names of the accused Border Patrol agent and the agent in charge, as well as other agents mentioned in the memos.

“I excused myself from the briefing and addressed the female agent,” explaining what Ocasio-Cortez alleged, the agent in charge wrote. According to the memo, the accused agent “immediately denied taking any photo.”

The accused agent “did admit to having her cell phone in her hand and showed me the current image on the screen,” the agent in charge wrote. “The image appeared to me to be web-based and had nothing to do with interior photos of the detention area.”

According to the memo, the confrontation heated up after the agent in charge spoke with the accused agent.

Ocasio-Cortez emerged “to personally admonish and berate” the female agent, “accusing her of unprofessional conduct and asking if she will have future contact with children,” the agent in charge wrote the next day.

“Rep. Ocasio-Cortez voiced that BPA REDACTED should have no contact with children, suggesting her unprofessional conduct (alleged photo) as the reason why,” the memo says.

Ocasio-Cortez tweeted about the incident after it was leaked the same day to the Washington Examiner and the newspaper published a story. Until now, though, details and documents about the altercation have been scarce.

“And to these CBP officers saying they felt ‘threatened’ by me— They were literally discussing making a GoFundMe for an officer who attacked my [sic] on my tour,” Ocasio-Cortez wrote on Twitter. “They confiscated my phone, and they were all armed. I’m 5’4”. They’re just upset I exposed their inhumane behavior.”

It’s not clear whether Ocasio-Cortez, in mentioning the “officer who attacked,” was referring to the female Border Patrol agent whom she accused of taking a selfie with her in the background.

The memo from the accused agent, with the subject “AOC Incident” and dated July 1, says:

On July 1, 2019, I heard a loud banging on the window behind me while I was working inside the processing area. I turned around to this lady shaking her fingers at me, I was not sure why she was trying to attract my attention until Patrol Agent in Charge (PAIC) REDACTED came to me and told me that they were accusing me of taking ‘selfie shots’ of Congresswoman Ocasio-Cortez. At this time, I immediately handed my phone to PAIC REDACTED to show him I had no photos of Ms. Ocasio-Cortez on my phone and he confirmed there were no photos of Ms. Ocasio-Cortez. Although my phone was out, I was not taking any photos.

One Border Patrol agent, assigned that day as the supervisor in charge of transportation, wrote of recognizing some lawmakers as they entered the El Paso station, including Reps. Joaquin Castro, D-Texas, and Rashida Tlaib, D-Mich., as well as Ocasio-Cortez.

This supervisor’s memo, dated July 2, provides additional context. In it, the supervisor recalls being on a phone call at 11:45 a.m. the day before when “two women from the group” of lawmakers “came near my area and began to point towards the monitor.”

The agent wrote: “The two women began to talk with themselves regarding how many subjects were in a certain cell.”

From there, this supervisor refers several times to Ocasio-Cortez as “Ms. Ocasio”:

At that point, Congresswoman Alexandria Ocasio-Cortez approached the two women [and] raised her voice to the extent that it drowned out DPAIC [Deputy Patrol Agent In Charge] REDACTED and demanded to know where a certain cell she was pointed at was located. She briefly turned towards my direction for an answer when outside of the REDACTED. Ms. Ocasio allegedly saw a Border Patrol Agent take a selfie of her. Ms. Ocasio pointed to the agent and began to bang on the glass and yell from the inside the REDACTED to the agent. I did not see any agent take a picture of Ms. Ocasio.

This supervisor’s memo goes on to paraphrase Ocasio-Cortez as saying “that woman cannot work with children,” referring to the agent she accused of taking one or more selfies. The memo says:

The Daily Signal doesn’t know the ethnicity of the accused female agent or that of other agents stationed in El Paso at the time. However, as of 2016, a majority of all Border Patrol agents—51%—were Hispanic. That percentage was consistent with the number in 2008.

The House members’ tour reportedly began at 11 a.m. local time. The briefing in which Customs and Border Protection officials took questions from the lawmakers was underway at 11:45 a.m. when Ocasio-Cortez made her accusation.

The entire tour group left the El Paso station at 12:30 p.m. local time, according to the transportation supervisor’s memo.

Ocasio-Cortez’s spokesman at the time, Corbin Trent, told The Washington Post for a story published the next day that a Border Patrol agent was trying to take a “stealth selfie” and did so “in a mocking manner.”

Trent said that Ocasio-Cortez “spoke sternly” to the agent about taking photos since the House members weren’t allowed to keep their phones during the tour.

A Border Patrol colleague, standing next to a computer nearby when the incident occurred, wrote a memo that day with the subject line “AOC Incident,” as did the accused agent.

“I was instructed” to submit the memo by the agent in charge, the witness writes, adding:

I turned around and saw a lady yelling and pointing her finger at Border Patrol Agent (BPA) REDACTED. I was standing next to BPA REDACTED and did not witness BPA REDACTED taking any photos.