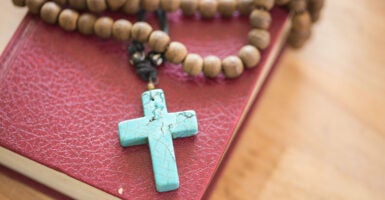 An Indiana court delivered a religious freedom victory Friday to a school in the Archdiocese of Indianapolis, confirming the school’s right to ensure that staff promote an authentic Catholic education.

Payne-Elliot was fired from his position at Cathedral Catholic High School after he entered a same-sex civil union, violating his employment agreement with the Catholic school, according to the Becket Fund for Religious Liberty, which represented the archdiocese.

Every Catholic school teacher in the Archdiocese signs an agreement to uphold the Church’s teachings in word and deed. The teacher here was dismissed after he entered a same-sex union in knowing violation of this agreement and of millennia of Catholic teaching.

“If the First Amendment means anything, it means the government can’t punish the Catholic Church for asking Catholic educators to support Catholic teaching,” said Luke Goodrich, vice president and senior counsel at the Becket Fund for Religious Liberty.

Though the trial court initially ruled that Payne-Elliot’s lawsuit could proceed, the Indiana Supreme Court sent the case back to the trial court for reconsideration. The Indiana Marion Superior Court threw out the entire case Friday.

“This has always been a very simple case, because the Supreme Court has repeatedly affirmed the freedom of religious schools to choose teachers who support their religious faith,” Goodrich said.