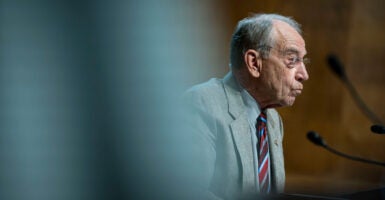 A group of conservative U.S. senators has introduced legislation that would prevent China from continuing to exploit its “developing country” status at the World Bank to access super low interest rate loans that are funded in part by American taxpayers—even as China continues its huge and aggressive debt-trap diplomacy “One Belt, One Road” development lending programs throughout the world.

According to Grassley, “China has been lending development money outside its borders to extend its influence for years while taking in U.S. taxpayer dollars via World Bank loans.”

His legislation would “provide a short-term and longer-term means to take away the status that allows China to receive loans and halt loans to any country like China that exceeds the World Bank graduation thresholds or poses a risk to religious freedom.”

For decades now, China’s communist government has exploited its status as a developing country in the world’s international organizations to game their systems and avoid the greater accountability and cost burdens that are shouldered by developed countries.

For example, notwithstanding the fact that the People’s Republic of China sits on the powerful U.N. Security Council as one of the “Permanent Five” countries with veto power, China remains a “developing country” member of the United Nations. This is in spite of the fact that it reached the World Bank’s threshold and graduated from developing country status in 2016.

That means that the World Bank itself considers China upper-middle income, yet Beijing insists on preserving its preferential treatment as a developing country.

China also continues to play the “developing country status” card in the International Monetary Fund, in the Paris climate agreement, and in numerous other global organizations.

Analysts at The Heritage Foundation have reported on how China stands to benefit from the recent massive expansion by the Biden administration of the International Monetary Fund’s “special drawing rights” mechanism.

>>> The Daily Signal is the news and commentary outlet of The Heritage Foundation.

Sen. John Kennedy, R-La., and Rep. French Hill, R-Ark., have been leading the conservative effort to stop that potentially abusive behavior by China. As reported by Reuters, Hill wrote to Secretary of the Treasury Janet Yellen that the massive expansion of special drawing rights (again, mostly at the expense of U.S. taxpayers) “would deliver unconditional liquidity to some of the most brutal dictatorships in the world.”

China’s status as a developing country also results from it taking advantage of regulations written largely in an era when it was unthinkable that a communist country could become an economic superpower. That belief was reinforced when the Soviet Union collapsed. China, however, has avoided the Soviets’ missteps.

It is heartening to see these and other efforts by conservatives to stop China’s predatory and abusive misuses of its membership privileges in international bodies.