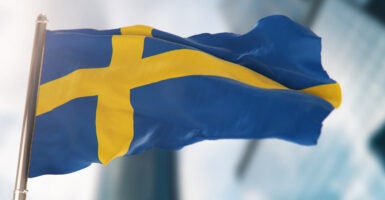 Even in liberal Sweden, a children's hospital said that “it has been decided that hormonal treatments (i.e., puberty-blocking and cross-sex hormones) will not be initiated in gender dysphoric patients under the age of 16.” (Photo: da-kuk/iStock /Getty Images Plus)

Sweden, arguably one of the most politically and socially liberal countries in the world, has nonetheless taken a giant step toward protecting gender dysphoric minors and their mental, emotional, and physical well-being.

The Society for Evidence Based Gender Medicine reported on Wednesday that the Astrid Lindgren’s Children’s Hospital—an arm of the one of the most renowned hospitals in Sweden, the Karolinska University Hospital—recently released a policy statement that included new guidelines for the care of youths with gender dysphoria under the age of 16.

The guidelines, which took effect April 1, are profound: They contradict many of the assertions of the transgender lobby, which encourage parents and children to accept that cross-sex hormones and puberty blockers are normal, healthy treatments for minors with gender dysphoria and should be pursued with little hesitation.

In the unofficial English translation of the original Swedish text provided by the Society for Evidence Based Gender Medicine, the statement from the Children’s Hospital reads in part:

In December 2019, the [Swedish Agency for Health Technology Assessment and Assessment of Social Services] published an overview of the knowledge base, which showed a lack of evidence for both the long-term consequences of the treatments, and the reasons for the large influx of patients in recent years.

These treatments are potentially fraught with extensive and irreversible adverse consequences, such as cardiovascular disease, osteoporosis, infertility, increased cancer risk, and thrombosis.

This makes it challenging to assess the risk/benefit for the individual patient, and even more challenging for the minors and their guardians to be in a position of an informed stance regarding these treatments.

Further, the ruling specifically establishes that it is highly unlikely, if at all possible, for an individual under the age of 16 to give informed consent to this treatment.

Influenced by that ruling, the Children’s Hospital said that “it has been decided that hormonal treatments (i.e., puberty-blocking and cross-sex hormones) will not be initiated in gender dysphoric patients under the age of 16.”

Patients between the ages of 16 and 18 may only receive treatment within clinical trial settings approved by the Ethical Review Agency/Swedish Institutional Review Board. The Children’s Hospital said it would be doing a “careful individual assessment” of patients currently receiving puberty blockers or cross-sex hormones to determine whether those treatments should continue.

Those new guidelines mean the Children’s Hospital has stopped following what the Society for Evidence Based Gender Medicine called the “Dutch Protocol,” which it says “allows for administration of puberty blockers at age 12 (and increasingly, as young as 8-9, at the early stage of puberty known as Tanner 2), and cross-sex hormones at the age of 16.”

Even to liberal Sweden, that seemed astoundingly young.

The new protocol also makes Sweden the first country to officially deviate from World Professional Association for Transgender Health guidance, which continues to promote puberty blockers and cross-sex hormones on children under age 16.

It’s hard to fathom that left-wing ideology in American culture, dragging the medical community with it, has ceded so much ground to LGBTQ activists that puberty blockers and cross-sex hormones are even discussed as options—let alone healthy ones—for children.

For years, medical professionals didn’t even know what puberty blockers and cross-sex hormones would do to a child. Little research was available because it had rarely been tried, tested, and evaluated, yet now the medical community—bolstered by leftist ideologues—push them.

The American Academy of Pediatrics endorses a “gender-affirming” approach that includes supporting insurance plans that include coverage for, “when appropriate, surgical interventions.”

Caution seems far more prudent when it comes to a child’s growing body, especially through puberty, but when it comes to transgenderism, prudence, research, and facts have been actively cast aside. Patience, talk therapy, and time are rarely discussed as viable options within the LGBTQ community.

On this issue, much of the medical community, and culture with it, has surrendered to the pressure of the LGBTQ lobby, which usually suggests that the only “cure” to gender dysphoric symptoms a child has is a medical transition via cross-sex hormones and puberty blockers.

Unfortunately, often the end result is akin to that of someone like Bell, whose case the Children’s Hospital guidelines alluded to (but without mentioning her name). She began a transition at the behest of medical professionals, and now lives as a biological female without breasts and regrets her decision.

Lawmakers, concerned parents, and medical professionals who seek to err on the side of caution need to come together and push for statewide bans of puberty blockers and cross-sex hormones for children under 18 years of age.

As the new Swedish Children’s Hospital guidelines stated, the medical evidence against utilizing these treatments is compelling. They are drastic treatments that deliver irreversible, life-altering results.

In April, Arkansas became the first state to ban cross-sex hormones and puberty blockers for minors. Other states should follow suit. Children’s minds and bodies must be protected before it’s too late.