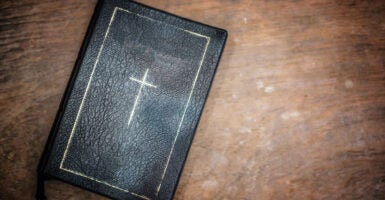 Finland’s former interior minister and leader of the Christian Democrats has been criminally charged for posting a picture of the Bible, opened to Romans 1:24-27. (Photo: boonchai wedmakawand/Getty Images)

Quoting the Bible can’t land you in American prison (yet), but in Helsinki, it’s a different story.

In a case that’s stunned the West, Finland’s former interior minister and leader of the Christian Democrats has been criminally charged for posting a picture of the Bible, opened to Romans 1:24-27. She was disturbed by the Evangelical Lutheran Church joining a gay pride event and decided to remind it what God says about homosexuality. Now, after a two-year investigation, the tweet could put her behind bars.

The saga, which has involved three police interrogations since 2019, rose to a fever pitch last month when the former MP was officially charged with “hate speech.” Finland’s prosecutor, according to reports, called the actions derogatory and discriminatory.

Päivi Räsänen fired back, insisting, “I do not see I would have in any way defamed homosexuals whose human dignity and human rights I have constantly said to respect and defend.” As a former government minister, she says she’s “shocked” the situation has elevated the way it has.

“I will go to the court with a peaceful and brave mind, trusting that Finland is a constitutional state where the freedoms of speech and religion, both of which are guaranteed in international agreements and in our constitution, are respected,” Räsänen has said. “A conviction based on the Christian faith is more than a surficial opinion. The early Christians did not renounce their faith in lions’ caves, why should I then renounce my faith in a court room?”

As for anything she’s said about the Bible’s teachings, she insists, “I will not step back from my conviction nor from my writings. I do not apologize for the writings of the Apostle Paul either. I am ready to defend freedom speech and religion as far as is necessary.”

In her blunt response, she also pointed out, “The Apostle Paul’s teaching is not only about defending marriage between man and woman, but about how a human being is saved into eternal life. If the teachings of God’s word about sin are rejected, also the whole core of Christian faith is made empty—the precious sacrifice of Jesus on the cross for the sake of everyone’s sins and the way He opened into eternity.”

Four thousand miles away, in Washington, D.C., this kind of persecution may sound far-fetched. But Rep. Greg Steube, R-Fla., knows from personal experience how much closer America is inching to this climate of open hostility. When he stood on the House floor in late February and read from Deuteronomy about the difference between males and females, he was blasted by Democratic colleagues.

“What any religious tradition describes as God’s will is no concern of this Congress,” Rep. Jerrold Nadler, D-N.Y., fired back.

To some people, it was a shock to hear a Democrat say those words out loud. But to others, it only confirmed what we’ve known all along: God has been of “no concern” to top Democrats for years. And if Americans don’t continue to push back and demand respect for our First Freedom, it won’t be long until the climate of hostility in Helsinki comes here.