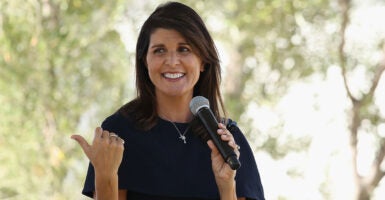 Nikki Haley, previously U.S. ambassador to the United Nations and governor of South Carolina, joins “The Daily Signal Podcast” to discuss what conservatives realistically can try to accomplish during the next 18 months while faced with a liberal Democratic president and Congress.

Haley—a Republican and founder of Stand for America, a 501(c)(4) advocacy group that promotes public policies it says strengthen America’s economy, culture, and security—also discusses how conservatives can engage in the debate of issues such as race and election security, including voter ID.

Plus: We share some of the highlights from President Joe Biden’s address to Congress.

Nikki Haley: Thanks so much for having me.

Del Guidice: To start off, I wanted to just get your thoughts on how conservatives can accomplish things during the next two years before the midterms with the majorities of the Democrats in the House and Senate and White House.

Haley: Well, I think, first of all, take that frustration that you’re feeling and remind your family and friends that elections have consequences. And we’re feeling the burn right now, but we need to take that energy. We need to put it as a force for good.

We need to make sure that we really focus on education and where our kids go from here in terms of skilled jobs, but also in recovering from the COVID era. And then I think we need to look at our debt.

The financial stability that we need to have is so important and the idea that we now have more debt than our economy, it’s [the] first time since World War II, it’s a national security threat. China and Russia jumping up and down, looking at how weak the dollar is, because they’d love to replace it as the world reserve.

Del Guidice: We’ve talked a lot on Twitter about how people want to label you a victim, but you do not consider yourself a victim. Can you talk about that? And just the idea of victimhood that the left talks about.

But even if you look at the voter ID bill, as much as Georgia has become this issue and they claim it’s racist. As governor of South Carolina, I passed voter ID in 2011. They said that I was keeping people from voting. They said that it was holding people back.

So I said, “Fine. If you think that what I’m doing is that terrible, anyone that needs a ride to the DMV to get photo ID, I will make sure we pick them up. I will take them to the DMV, get a free photo ID. And we will return them home.”

Out of 5 million people in South Carolina, 25 people asked for a ride. The number of voters we have went up.

And I think Democrats have very much been the ones—they call us racist, but they’re actually the ones having the racist behavior. And I think we need to fight back on that.

Del Guidice: Speaking of the issues of race, how would you say conservatives can engage on racial tensions and really make a difference there?

Haley: I think the first thing you have to do is listen. I mean, any time you have people who feel pain, it’s important to hear that pain. It’s important to understand what they’re thinking and talk to them about it. Because when you first have a conversation, if you first talk about the things you have in common, everybody lets their guard down and then you can get to a solution.

You know, in South Carolina, we had the shooting of Walter Scott, and he was an unarmed black man that was shot seven times in the back. It played all over national media for the world to see. The first thing I did was reach out to the Scott family. And then I reached out to law enforcement.

You have to find the good in both sides and you have to take them to the next level. And I think there’s a way to do that without shouting each other down.

Del Guidice: Earlier on, you mentioned Communist China, and the Olympics are going to be held there. Do you have any perspective on that and how the U.S. can be engaging despite the Biden administration and the policies it looks like they’re going to be enforcing there?

Haley: … I, first of all, think we should absolutely boycott the Chinese Olympics. The last time that Beijing hosted the Olympics, it was their coming out party. It was their way of saying, “Look at us. We are a rising star.” This time when China comes out with their Olympics, it’s to say, “We are the new superpower of the world.”

We promised years ago never again would we turn our eyes away from genocide. There’s true genocide happening in China.

The idea that we would go forward with the Olympics is a mistake, but we should be getting other countries to go along with us. Australia has spoken out. Canada has spoken out. We should get Japan on board and India on board to go and say we’re not going to let you get away with this.

They just gave a virus to the world that killed millions of people. The idea that we would even entertain the idea of a Chinese Olympics is ludicrous.

Del Guidice: On Twitter, you’ve also talked about how Democrats want the federal government to control America’s elections. … Are they doing this with the For the People Act and what are the dangers you see there?

Haley: I think they’re doing it any way that they can. I think they’re threatening to take the filibuster. But I think the idea that it’s, first of all, not a “For the People Act,” it’s another Democrat farce where they go and try and make you think something that it’s not.

Del Guidice: Something else Democrats are talking about is adding more justices to the Supreme Court. What are your thoughts here?

Haley: I think [the late Justice] Ruth Bader Ginsburg said the second you add more justices to the court, you’re politicizing the court. So from her own words, I think that that’s one thing that we have to look at.

The Democrats are just mad that we got more conservatives on there than we did liberals. And so, they think that they can cheat their way through it. I think we have to push back and show them that we’re not going to do that.

Del Guidice: Well, you had a really great graphic up on Twitter. I know we were talking about voter ID a little bit ago, but you had highlighted that you need an ID to purchase a car and to adopt a pet and just all these various other things that people do every day. Can you talk a little bit about the pushback we’re seeing to provide an ID and your thoughts on that?

And again, it goes back to the fact, don’t act like minorities can’t get photo IDs. They are perfectly capable of getting photo IDs. We do this every day. And I think that’s something that’s important. And especially if you told minorities that this is what you need to do to protect the integrity of the elections. They want their vote to count just as much as anybody else wants their vote to count.

I think that the narrative is that they’re making it racist so people believe it must be racist. But I think when you go and say, “Are you not able to get a photo ID?” Most of them will tell you they have a photo ID. And if they don’t have it, they have no problem going to get it.

Del Guidice: Another topic that everyone’s talking about in the news right now is the situation at the border. Vice President Kamala Harris has been in charge of that. She hasn’t been there yet to visit.

As someone who was a governor of a state, and I’m sure you probably had to deal with issues of illegal immigration too, even though South Carolina is a border state, what are your thoughts on what’s happening?

Haley: Well, we did. We had to deal with the Syrian refugees at the time that [President Barack] Obama was trying to send into our states. And we said that we weren’t going to allow any in South Carolina.

You know, as the daughter of immigrants who reminded my brothers, my sister, and me every day how blessed we were in this country, they are offended by anyone who comes here illegally.

So what we’re looking at is a crisis that is putting children in danger, putting families in danger. And what President [Donald] Trump did that really worked was tough love.

I mean, what’s amazing to me is that here you have Trump who had a border crisis, went and fixed it, and then Biden turned around and broke it again. And God help us if Kamala ever becomes president, because if this is how she handles a crisis, we’re in real trouble.

As someone who was previously the ambassador to the U.N., what is your perspective on what she’s saying? And I guess, how do you feel about it since you got to speak on behalf of this great country?

Haley: It hurts my soul. I mean, I’ve never spoken out against a successor, whether it’s governor or ambassador, and the idea that she would go and basically condemn America as a racist country—the rest of the world is going to look at that and say, “What is going on?”

I mean, when I was U.N. ambassador, people would take me to the side and say how unbelievable America was. They couldn’t believe the freedom of speech and freedom of religion and freedom to be and do anything you wanted to do without government getting in the way.

The idea that she is even implying that we’re a racist country when all those countries want to be us is an embarrassment. And it’s shameful for America.

Del Guidice: Well, Ambassador Haley, thank you for joining us on The Daily Signal. It’s been great having you with us.

Haley: Thanks so much.