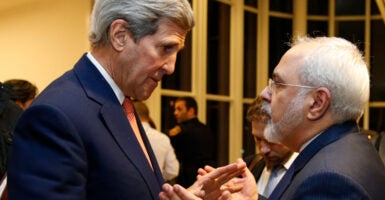 Former Secretary of State John Kerry vehemently denied Monday that he had provided Iran’s foreign minister with secret information about Israel’s strikes in Syria, an allegation seized upon by Republicans to call for Kerry’s ouster as the Biden administration’s climate czar.

“I can tell you that this story and these allegations are unequivocally false. This never happened—either when I was Secretary of State or since,” Kerry tweeted in response to reports of his interactions with Iranian Foreign Minister Mohammad Javad Zarif.

Iran International, a London-based outlet, and The New York Times reported that Zarif said in a secret audio recording that Kerry had informed him that Israeli forces had struck more than 200 Iranian targets in Syria.

Numerous Republican lawmakers called on Kerry to resign from the National Security Council, where he serves as special envoy on climate issues.

Republicans alleged that Kerry may have disclosed classified information to Zarif.

“If this tape is verified, it would signal catastrophic and disqualifying recklessness by Envoy Kerry to Foreign Minister Zarif that endangered the safety of Americans and our allies. And it would be consistent with his long pattern of empowering Iran’s regime,” Sen. Ted Cruz, R-Texas, said Monday in a written statement.

Although Kerry denied the report about Zarif’s remarks, he did not directly accuse the Iranian official of lying during the interview reported by Iran International. The Iranian government has not disputed the authenticity of the audio recording, though it decried that it was leaked.

The reports about Zarif’s comments, which he made to an Iranian journalist, do not say whether Iran’s foreign minister gave a timeframe for Kerry’s alleged remarks.

Israel’s activities in Syria have been widely reported for years in the media, but the Israeli government did not officially acknowledge the extent of its military action until September 2018.

“Only just now it was published—in the name of military sources, so I can quote it too—that in the last two years Israel has taken military action more than 200 times within Syria itself,” Israeli Intelligence Minister Israel Katz said at the time, according to Reuters.

Kerry told conservative radio host Hugh Hewitt on Sept. 12, 2018, that he had met with Zarif “three or four times” since leaving government.

Kerry came under scrutiny during the Trump administration over his continued contacts with Zarif. The Boston Globe reported in May 2018 that Kerry met with Zarif to discuss how to maintain the Iran nuclear deal, which Kerry helped develop when he served as secretary of state in the Obama administration.

In April 2019, President Donald Trump accused Kerry of violating the Logan Act, which prohibits private citizens from negotiating with foreign governments on behalf of the U.S. government.