What Is the Freedom of Association and Will the Supreme Court Protect It? 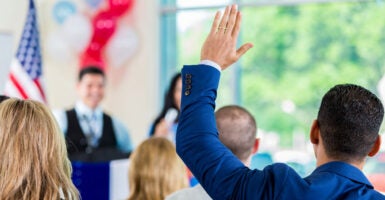 The freedom of association is closely tied to the freedoms of speech because it facilitates ideas and expression. The Supreme Court should protect this right from leftist states that want to arrest the development of ideas they don’t like. (Photo: SDI Productions/Getty Images)

The Supreme Court heard oral arguments on Monday in Americans for Prosperity Foundation v. Rodriquez as well as a related case brought by the Thomas More Law Center, which challenge a California policy requiring nonprofits to disclose the names of their anonymous donors. The policy was initially created by then-state Attorney General Kamala Harris.

The petitioners sued California on the ground that the policy violated their members’ freedom of association. They argue that the freedom of association protects Americans’ right to associate anonymously, and they fear that if they are forced to disclose their members’ names, partisan government employees or hackers may leak them to the press and subject them to harassment.

These are real concerns in a time where people with “problematic” views can be fired, ostracized, and harassed if those views are made public.

The case has attracted one of the broadest left-right coalitions in recent Supreme Court history. Organizations as diverse as the Cato Institute, the ACLU, the Pacific Legal Foundation, PETA, Concerned Women for America, NARAL Pro-Choice America, Wisconsin Right to Life, and many more have joined forces to argue that the freedom of association protects the right of people to anonymously donate to public-interest organizations.

Just what is the freedom of association and what does it protect?

The words “freedom of association” do not appear in the text of the First Amendment, which states:

Congress shall make no law respecting an establishment of religion, or prohibiting the free exercise thereof; or abridging the freedom of speech, or of the press; or the right of the people peaceably to assemble, and to petition the Government for a redress of grievances.

The concept comes from a 1958 case, NAACP v. Patterson, where the Supreme Court stopped Alabama from forcing the NAACP to disclose its membership list. (Curiously, the NAACP has not joined the many left-leaning organizations challenging California’s law).

There, the court loosely tied the freedom of association to the “close nexus” between the freedoms of speech and association. But when it came time to articulate a theoretical foundation for the right to freely associate, the court suggested that association was protected only because it facilitated expression: “Effective advocacy of both public and private points of view, particularly controversial ones, is undeniably enhanced by group association.”

The case now before the court presents it with a golden opportunity to tie the right to the text and to give it a real foundation. A powerful friend-of-the-court brief filed by the Becket Fund for Religious Liberty explains how.

The freedom of association, Becket argues, should be tied to the right of assembly—not the right to free speech or to petition the government—because associations do not exist primarily for expression. Rather, they exist primarily to teach and instill in people “the beliefs, traditions, rituals, and customs” that are later expressed in free speech and in petitions to the government.

In other words, the freedom of association is not expressive but “formative.” It creates thoughtful, caring, and engaged citizens.

As Becket’s brief makes clear, this is how the Framers viewed the right of assembly. To them, the Constitution not only protected the people’s right to express themselves, but also protected their right to privately form the ideas and beliefs that they would later express.

That is what is at stake in AFPF v. Rodriquez.

If the right to privately form ideas and beliefs is not anchored to the text and history of the First Amendment, it may be undermined by governments, like California’s, that want to arrest the development of ideas they don’t like before those ideas turn into the speech they fear.

The Supreme Court can and should finally anchor the freedom of association to textual and historical bedrock and protect Americans’ freedom to form the ideas, values, traditions, and beliefs that make us good and active citizens.