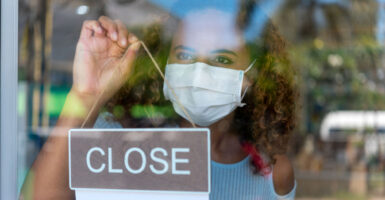 Small businesses make up the vast majority of corporations that would face Biden's proposed tax increase, with 85% having fewer than 20 employees and 99% having less than 500 employees. (Photo: Kmatta/Getty Images)

As a part of his “American Jobs Plan,” President Joe Biden has proposed massive tax increases on American businesses.

Biden claims his tax increases would “ensure that corporations pay their fair share of taxes.”

It’s common sense that corporations don’t make profits by paying taxes, they pass those costs along. The cost of higher taxes gets passed on to workers with less pay, consumers with higher prices, and shareholders with lower value in their retirement accounts.

Taxes on businesses are taxes on American people.

The proposal would increase the federal corporate tax rate to 28% from the current 21%. This damaging tax hike would harm workers, make America a less attractive place to do business, and burden small businesses.

Increasing the corporate tax rate to 28% would reduce the size of the economy about $1,650 annually per household. Wages would fall by about $840 per year for the median worker. Total hours worked would fall equivalent to about 500,000 full time jobs.

When many people hear the term “corporation” they may assume that it only encompasses large, well-known businesses. But small businesses make up the vast majority of corporations that would face this tax increase, with 85% having fewer than 20 employees and 99% having less than 500 employees.

Increasing the corporate rate would be a major blow to America’s international competitiveness, giving the U.S. the highest tax rates among all of our major economic competitors. At 32.34%, the combined federal and state taxes rate on U.S. corporations would be higher than the United Kingdom’s 19%, Russia’s 20%, China’s 25%, Canada’s 26.5%, and even higher than France’s 32% rates.

The corporate tax is inefficient and economically destructive. Instead of increasing business taxes, Congress should reduce tax burdens on job creators.

Despite the improvements made by the 2017 tax cuts, the tax code for income earned abroad by U.S.-based international corporations is still a complicated alphabet soup of rules.

Biden’s proposal for international taxation would make it more expensive and complicated to be a multinational corporation headquartered in the United States.

The centerpiece of the proposal is establishing a 21% minimum tax on international profits for U.S.-headquartered companies, a new tax burden that foreign-based companies would not face.

The president’s proposal would increase incentives for companies to move their headquarters out of the U.S. through inversions, taking intellectual property, investment, and jobs along with it.

In a troubling proposal, Biden announced that he is seeking an international agreement with foreign countries to impose global minimum taxes on corporations so that no country can “gain a competitive edge.”

Rather than “America First,” this administration is working to deny a competitive edge for American businesses and workers.

Treasury Secretary Janet Yellen even said, “Competitiveness is about more than how U.S.-headquartered companies fare against other companies in global merger and acquisition bids. It is about making sure that governments have stable tax systems that raise sufficient revenue.”

In other words, the treasury secretary of the United States is willing to harm U.S. employers and workers in order to help foreign countries raise more tax revenues.

Instead of harming the economy by raising taxes, the United States should welcome the opportunity to outcompete the rest of the world and put American workers in the best position possible to succeed.

The Biden proposal includes a new 15% minimum tax on the “book income” for large corporations that is reported on their financial statements.

Book income and taxable income differ in several ways because they have different purposes and different rules.

While taxable income is specified by Congress in law, the guidelines for reporting financial statements including book income are set by a private nonprofit.

A minimum tax on book income would add even more complexity to the tax code and increase the tax burdens on employers even if they are following the tax laws already on the books.

The president plans to ramp up IRS tax enforcement. Of course, everyone should pay the taxes that they legally owe. The best way to encourage compliance is to simplify the tax code. However, the resident’s tax plan would make the tax code even more complicated and expensive to comply with.

The added complexity would make corporate accountants and lawyers more important, but would lead to fewer investments in other employees at companies facing higher tax burdens.

Congress Should Reject This Self-Inflicted Mistake

Raising taxes on employers just while the economy is beginning to recover would be a self-inflicted mistake. The negative effects would be felt by real Americans.

Rather than harming the country through tax hikes, a pro-growth agenda to promote prosperity for all households in the United States is to keep taxes low, and spending in line with revenue.