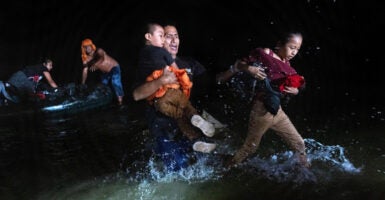 In just three short months, the Biden administration and congressional Democrats have unleashed the worst border crisis in the history of our country. Pictured: Illegal immigrants wade ashore April 14 in Roma, Texas, after a smuggler, left, brings them across the Rio Grande from Mexico in a raft. (Photo: John Moore/Getty Images) 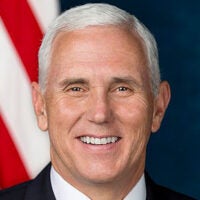 President Joe Biden inherited the most secure southern border in American history. Under the Trump-Pence administration, we built more than 450 miles of the world’s most robust border wall, reducing illegal crossings by over 90%.

We abolished the absurd practice of “catch and release.” We ended asylum fraud through a groundbreaking partnership with Mexico known as the Migrant Protection Protocols, requiring illegal aliens who are seeking asylum to remain in Mexico while their cases are adjudicated.

And during the pandemic, we authorized sweeping emergency measures to immediately remove virtually every illegal immigrant apprehended at the southern border, to protect the health and safety of American citizens.

For years, politicians promised to secure the border. Under the last administration, we delivered.

And yet, in just three short months, the Biden administration and Democrats in Congress have unleashed the worst border crisis in the history of our country.

On his first day in office, Biden suspended nearly all deportations nationwide, shut down construction of the border wall, reinstated catch and release, canceled the Migrant Protection Protocols, and proposed amnesty for millions of illegal aliens currently residing in the United States. Not long after that, the Biden administration announced it would allow unaccompanied minors to enter the country.

Seemingly overnight, illegal immigration surged to levels unseen since 2006. The number of unaccompanied minors apprehended at the border is the highest ever recorded, and the results are heartbreaking.

Smugglers are dropping toddlers from atop 14-foot-high border barriers, leaving children as young as 3 to fend for themselves in the wilderness. Tragically, children and adults have drowned trying to cross the Rio Grande. American citizens living near the border have become victims of burglary, theft, and worse.

The problem isn’t getting better—it is rapidly growing worse.

Biden administration officials now admit that as many as 2 million migrants may try to enter our country illegally this year, the most of any year in the 21st century.

In addition to spending $87 million on hotel rooms for illegal aliens, the administration frantically has converted military bases and convention centers into emergency housing in anticipation of the next, even larger, wave of unaccompanied minors, families, and adults.

Yet as the human suffering intensifies on both sides of the border, neither Biden nor Vice President Kamala Harris has taken the time to visit the border and witness the crisis firsthand.

Thousands of miles to the south, the Democrats’ message is as clear as a bell. As Mexican President Andrés Manuel López Obrador correctly noted:

Expectations were created that with the government of President Biden there would be a better treatment of migrants. And this has caused Central American migrants, and also from our country, wanting to cross the border thinking that it is easier to do so.

The catastrophe now unfolding at our border is a direct result of progressive policies and pronouncements emanating from Democrats in Washington. But Democrats can end this disaster just as quickly as they caused it. All they have to do is reinstate commonsense border enforcement and stop treating U.S. Immigration and Customs Enforcement and Border Patrol as a concierge service for illegal aliens.

The truth is, support for open borders and unlimited immigration is a key precept of today’s Democrat Party. It is extremely telling that most Democrat politicians refuse to even utter the word “crisis” to describe what obviously is an unmitigated disaster. Many on the radical left likely don’t see the current crisis as a failure, but ultimately as a victory in their never-ending struggle for open borders.

Democrats believe the problem at the border is a lack of capacity to house and process an unprecedented surge of illegal aliens. But the actual problem is not mismanagement of the surge but the surge itself, which is caused solely and exclusively by Democrats’ open border policies.

In fact, the left’s approach thus far to dealing with the crisis only will exacerbate the problem. There never will be enough capacity to deal with the surge that the left’s policies invite.

Until left-wing politicians recognize the true nature of the border crisis and its roots in far-left policies, the crisis only will get worse. Wave after wave of illegal aliens will arrive at our southern border in an endless cascade of chaos.

The savage drug cartels that profit from human smuggling will grow richer and more powerful by the day, bolstering their ability to terrorize their home nations while flooding American neighborhoods with a sea of poisonous drugs and violence.

Immigration has been an existential issue for all nations at all times, but never more so for the United States. America is a welcoming nation to many who come in search of opportunity, but we also must be a nation of laws. Open borders combined with free health care, education, and welfare is a recipe for disaster. You can be for working-class families or you can be for open borders—but you cannot be for both.

In four short years, the Trump-Pence administration proved that we can secure our southern border and end the crisis of illegal immigration.

Every American concerned about the humanitarian crisis at our border should continue to demand full enforcement of immigration law, renewed investments in border security and the wall, restoration of the “Remain in Mexico” policy, and an end to catch and release.

These policies worked under our administration, and they are the only means of ending the unfolding crisis of illegal immigration under the Biden administration.