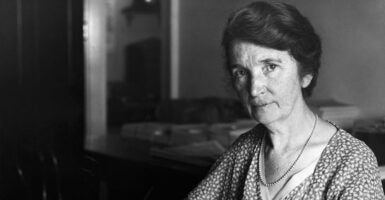 Margaret Sanger, founder of Planned Parenthood, appeared at a Ku Klux Klan meeting; supported Buck v. Bell, which allowed the sterilization of the “unfit” in America; and supported a birth control experiment in Puerto Rico, where participating women were not informed of any possible harmful side effects. (Photo: Bettmann/Getty Images) 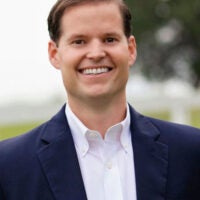 Shawn Carney is a bestselling author and CEO and president of the pro-life organization, 40 Days for Life. He is the author of “The Beginning of the End of Abortion” and “To the Heart of the Matter.”

Alexis McGill Johnson is not doing a good job in her new role at Planned Parenthood.

McGill Johnson is the most recent “new” CEO of Planned Parenthood. Last week, she took to writing a New York Times op-ed in which she decided to be bold and add Planned Parenthood to the list of woke organizations.

This is easier said than done, since Planned Parenthood was founded by well-known eugenics sympathizer and racist Margaret Sanger.

Sanger knew that nothing could carry out eugenics or racism better than contraception and abortion. Her references to “exterminate the Negro population” and the “unfit” haunted Planned Parenthood’s reputation for years.

“For the 11 years that I’ve been involved with Planned Parenthood, founded by Sanger, her legacy on race has been debated,” McGill Johnson writes. “Up until now, Planned Parenthood has failed to own the impact of our founder’s actions. We have defended Sanger as a protector of bodily autonomy and self-determination, while excusing her association with white supremacist groups and eugenics as an unfortunate ‘product of her time.’”

McGill Johnson goes on to point out Sanger’s appearance at a Ku Klux Klan meeting and her support of the Supreme Court’s 1927 decision in Buck v. Bell, which allowed sterilization of the “unfit” in America. She even acknowledges Sanger’s support for a birth control experiment in Puerto Rico, where participating women were not informed of possible harmful side effects.

But McGill Johnson refuses to call Sanger a racist, saying that we don’t “know what was in her heart.”

I guess we should ask Puerto Ricans, the “unfit” who were sterilized, and blacks who were persecuted by the KKK if they had a guess as to what was in Sanger’s heart.

If Sanger wasn’t a racist because we don’t know what was in her heart, then no one is a racist. Yet according to woke culture, everyone is a racist these days.

Once she was named CEO on July 16, 2019, how could a “renowned social and racial justice leader” not immediately write this editorial on Day One?

From the facts alone, Planned Parenthood’s mission has not changed, and if there is one priority that trumps race, it is abortion.

Just ask McGill Johnson’s predecessor, Leana Wen, who wrote an op-ed in The Washington Post about the pain of her miscarriage and losing her baby and claimed publicly that she wanted to reduce abortions. Planned Parenthood fired Wen after less than a year on the job. Abortion always explained the racial silence from Planned Parenthood.

During her more than a decade at Planned Parenthood, there was plenty of time before the death of George Floyd in Minneapolis for McGill Johnson to point out the obvious—Planned Parenthood’s founder was a racist and a eugenics sympathizer.

The most cited reasons for getting an abortion are economics and disabilities. Planned Parenthood talks about providing health care for low-income women, yet you will not see a doctor there unless you’re having an abortion. The organization doesn’t provide low-income women with professional medical care; rather, it sells them abortions.

Planned Parenthood’s own annual report shows the company did a 15-year record high of 354,871 abortions in the latest reported year, most of which occurred in minority neighborhoods. That’s an abortion every 89 seconds.

The record year for abortions also saw breast exams go down 63%, Pap tests drop 64%, and prenatal services decrease by 72%. Abortion makes up 96% of Planned Parenthood pregnancy services. Over the last decade, it has done 129 abortions for every one adoption referral.

The woke culture has created a culture of disingenuousness and skepticism. The pro-life movement has been pointing out the racist and eugenics beliefs of Planned Parenthood’s founder for decades. But decade after decade, Planned Parenthood gave out an award in Sanger’s honor and told pro-life advocates that we were misguided fanatics.

Now, its president and CEO is telling us that the organization will “make Margaret Sanger less prominent in our present and future,” yet she won’t even call her a racist and continues to advance Sanger’s vision.

Black Americans make up 12% of the U.S. population and account for nearly 36% of all abortions. No person—white, black, or brown—is supposed to question that because McGill Johnson tells us that we don’t know what was in Sanger’s heart.

Give me a break. Her New York Times op-ed is a waste. If Planned Parenthood’s CEO claims she stands for black America and cannot call Sanger a racist after pointing out her racism, then woke culture has reached a new level of superficiality, which is why so many don’t pay attention to it.

Planned Parenthood can’t have it both ways. You cannot distance yourself from your racist and eugenics-supporting founder while refusing to call her a racist and stop her eugenics vision.

All of this is a distraction for Planned Parenthood and good for the pro-life movement. The more the organization’s executives run around justifying its existence and ridicule its founder while defending her, the less leadership, guidance, and support its local abortion facilities will get.

This is why we should be proud that 40 Days for Life is built from the grassroots up. Our strength is where the abortions take place, not in self-delusional New York Times op-eds.