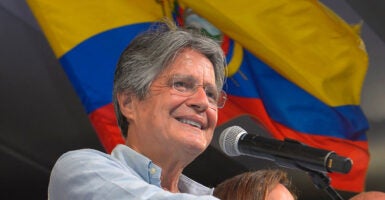 Guillermo Lasso, president-elect of Ecuador, was elected on April 11. His election represents a positive step forward for the country. (Photo: Fernando Mendez/AFP/Getty Images)

The world witnessed two presidential elections in South America on April 11. One of them gave the victory to Guillermo Lasso, now president-elect of Ecuador. In Peru, an election that featured a total of 18 candidates is now going into a runoff election between Keiko Fujimori and Pedro Castillo. Both of these elections will have a significant impact on the hemisphere.

Lasso has pledged to take an important step to fight against the previous administration’s corruption. After defeating Andres Arauz, a supporter of Ecuador’s ex-President Rafael Correa, the current administration of Lenin Moreno will now step down as Lasso, who has been adverse to Correa, prepares to take office.

Correa stayed in office for 10 years, from 2007 to 2017. He is currently facing a sentence of eight years in prison after being found guilty of being part of a criminal structure of bribery between 2012 and 2016. This scandal, known as the Odebrecht corruption scandal, involved many prominent politicians in the region.

However, Correa is currently residing in Belgium, evading justice in Ecuador. Lasso, the president-elect, is a breath of fresh air for freedom-lovers in the country. He opposes Correa’s radical socialist model and advocates a freer government system with less public spending.

Freedom has won in Ecuador after the elections. Correa’s era will be remembered as the so-called socialism of the 21st century, the same governmental model that led to chaos and misery in Venezuela under Hugo Chavez and Nicolas Maduro. Now, Ecuador has the opportunity to embrace a system that can provide stability and prosperity for all, and leave behind the dark ages of corruption, authoritarianism, and rampant public spending.

In Peru, the picture is not quite as optimistic.

Peru has been three years without an elected president (due to a series of resignations), and is experiencing one of the most irregular cycles in political history.

Only last year, there were three different constitutional presidents—that is, they were not elected by the people.

Currently, the leading candidate for the presidency, Pedro Castillo, is a far-left candidate who wants to implement the same socialist agenda we have seen played out in the continent many times. He plans on changing the constitution of the country once elected. His vision is hyper-isolationist from the world, and he intends to nationalize any enterprise that does not meet the government’s criteria.

Unlike other totalitarian governments, like Chavez’s regime in Venezuela, Castillo is not even trying to hide or hold back on his idea of nationalizing private industries. As a presidential candidate, he has openly talked about his plan to nationalize mining, oil, gas, and any country’s energetic sector. Castillo plans on running a country heavily subsidized in every sector of the economy.

Peru is likely facing one of the most radical candidates ever seen in history. The authoritarianism exposed by Castillo is a radicalized version of far-left politicians in the region. He is committed to applying the utopistic model that recent totalitarians have applied in the continent—every single one of them taking their countries to a road of misery.

Peruvians cannot simply overlook the dangers of these ideas. Historically, countries worldwide have suffered the darkest chapters of their history due to candidates with these authoritarian trends.

My country, Venezuela, also suffered the consequences of socialism of the 21st century. It led to shortages, lack of medicines, hyperinflation, extreme poverty, dependency, censorship, and absolute control from the government.

For South America to be a truly free hemisphere, its citizens should embrace free-market proposals. They should also learn from the lessons of their own history and those of their neighbors, and ask themselves if they want the failed, broken systems that socialist totalitarians have brought about in other nations.