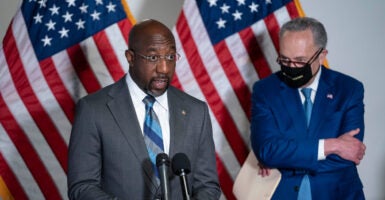 Having been caught exaggerating and misrepresenting Georgia’s new election integrity law, Democrats have decided to double down and throw the weight of the U.S. Senate behind their dishonest and offensive propaganda campaign.

In a hearing hyperbolically titled “Jim Crow 2021: The Latest Assault on the Right to Vote,” the Senate Judiciary Committee on Tuesday became the latest credibility casualty of the left’s insatiable appetite for permanent electoral dominance.

Sen. Raphael Warnock, one of the leading voices misleading the nation and his fellow black Georgians about the content of his own state’s law, boiled down the Democrats’ principal lie, declaring, “This is a full-fledged assault on voting rights unlike anything we have seen since the era of Jim Crow.”

Republican Rep. Burgess Owens, who is also black, rejected the rhetorical histrionics and asked for realism, saying, “To call this Jim Crow 2021 is an insult, my friends. For those who never lived Jim Crow, we are not in Jim Crow.”

To cut through the superheated rhetoric of the left, some historical perspective is necessary. Jim Crow laws were an abomination, a stain on America’s history, under which black Americans were subjected to legalized racism and codified segregation.

Under actual Jim Crow laws, blacks were systematically blocked from voting through poll taxes, literacy tests, and grandfather clauses requiring that a person’s ancestor had been a voter prior to the Civil War.

In almost all areas of life, blacks were denied equal access, including in education, employment, hospitals, public facilities, restaurants, and even cemeteries.

Under Jim Crow in Birmingham, Alabama, blacks and whites were forbidden from playing cards, dice, checkers, or dominoes together.

In Oklahoma, mixing of the races while boating was illegal.

In Georgia, black barbers were not allowed to cut the hair of white girls or women.

And aside from actual statutes, Jim Crow “etiquette norms” were commonplace and socially enforced.

Black men could not offer to shake hands with white men because to do so would imply equal social status.

For a black man to physically contact a white woman was to risk being accused of rape. In fact, black men were not to offer to light a cigarette for a white woman because the gesture was too intimate.

Public displays of affection between blacks were frowned upon since they could offend the sensibilities of white witnesses, especially if the black people were kissing.

At traffic intersections, white motorists had the right of way at all times.

And, of course, extreme violence and lynching for perceived offenses large and small were very much a part of the landscape.

The absolute horror of such an inhumane framework of racist laws is what Democrats are trying to conjure when they liken election integrity laws to Jim Crow. It is done purposely and irresponsibly.

So, what is it exactly that the Georgia law does that warrants such outrageous comparisons?

It requires that absentee voters prove their identity, such as with a driver’s license number. It prevents political campaign workers from providing refreshments to voters waiting in line, although it allows poll workers to do that. It slightly reduces the number of early voting days but expands weekend voting. The law also moves the absentee voting deadline earlier but requires the availability of ballot drop boxes for the very first time.

This is what Democrats obscenely describe as “Jim Crow 2021.”

Twenty-one black leaders sent a letter to the Judiciary Committee objecting to the “Jim Crow” characterization of the Georgia law, writing that “the public discourse about Georgia’s new voting reforms has not been civil, fair, nor honest.”

One of the signers of the letter was Heritage Foundation President Kay C. James, who personally experienced segregation early in her life. (The Daily Signal is the news and commentary outlet of The Heritage Foundation.) In recent column, she wrote of the allegations being hurled around, and concluded that “the falsehoods and outright lies are appalling.”

Among those spreading the falsehoods is President Joe Biden, theoretically the leader of the Democratic Party, who has been out front in denouncing the Georgia law as “Jim Crow,” even going as far as encouraging Major League Baseball to pull the All-Star Game from Atlanta as punishment.

After baseball took his advice, Biden’s team perhaps sensed an overreach and quickly (and dishonestly) denied that he had said what he said.

But Biden should know better what Jim Crow really was, since he has a history of palling around with real, live, segregationist senators in the past and even worked with them when they opposed integrating schools through busing.

For that part of his record, he was blistered during the recent Democratic Party primaries in a memorable debate moment with one of his competitors, who now happens to be his vice president.

And perhaps Biden is overcompensating these days, since he also infamously eulogized Sen. Robert Byrd, a former Exalted Cyclops in the Ku Klux Klan, saying he was “one of my mentors” and that “the Senate is a lesser place for his going.”

It’s no secret why Democrats are engaged in such odious and indefensible overstatements: They desperately want to pass HR 1, which is the federalization of election law and the ticket to their electoral success for decades to come. And to do that, they also need to eliminate the filibuster, which sets an unreachable bar of 60 votes for passage in the Senate.

And, so, guess what? The filibuster is a “relic of Jim Crow,” too.