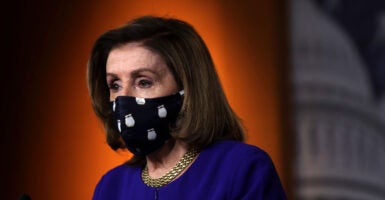 Pelosi added that Waters’ comments, made Saturday in Brooklyn Center, Minnesota, did not amount to inciting violence and that Waters should not apologize for them.

“Maxine talked about confrontation in the manner of the civil rights movement,” Pelosi, D-Calif., told reporters Monday. “I myself think we should take our lead from the George Floyd family. They’ve handled this with great dignity and no ambiguity or lack of misinterpretation by either side.”

“No, no, I don’t think [Waters] should apologize,” Pelosi said.

Protests, some of which have devolved into riots and looting, have been ongoing in Brooklyn Center since one of the city’s police officers, Kim Potter, fatally shot Daunte Wright during a traffic stop after mistaking her gun for a taser.

Wright, 20, died minutes after being shot, and Potter, who resigned from the police force, was arrested and charged with second-degree manslaughter Wednesday.

Attorneys in Chauvin’s trial in Minneapolis began their closing arguments Monday, and a verdict is expected in the coming days.

Waters made similar comments in 2018, when she encouraged people to harass Trump administration officials and supporters in public.

“If you see anybody from [President Donald Trump’s] Cabinet in a restaurant, in a department store, at a gasoline station, you get out and you create a crowd, and you push back on them, and you tell them they’re not welcome,” she said.