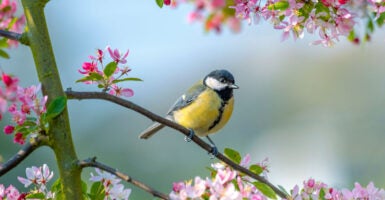 “A bird should not be linked to any single person and should not have to carry a reminder of our own fraught history,” David Sibley, a well-known birding expert, says. (Photo: Jacky Parker Photography/Getty Images)

The experts agreed that North American birds named after slave owners and colonialists should be renamed to make the U.S. and global bird watching community more inclusive during the event hosted by the American Ornithological Society on Friday afternoon.

“Our mission is to inspire all people to enjoy and protect wild birds,” Jeff Gordon, the president of the American Birding Association, said during the discussion. “Our primary path to conservation is people and community and the promotion of shared ethics and values. We’re particularly interested in, and committed to, building a more diverse and inclusive birding community.”

David Sibley, a well-known birding expert who has written several field guides for bird watchers, said during the event that maintaining the status quo with regards to bird names would be a disservice to the animals themselves. He added that it was up to the experts present to educate bird watchers on the necessity of renaming.

“A bird should not be linked to any single person and should not have to carry a reminder of our own fraught history,” Sibley said. “The hardest part will probably be convincing the birding community that this is worth the trouble and education will be the key to that.”

“It’s a small step in the big landscape of racial and social injustice, but I think it’s important and definitely worth doing,” he continued.

In June, a large group of bird watching enthusiasts wrote a letter to the American Ornithological Society’s North American Classification Committee demanding that it begin the process of renaming birds. The committee is responsible for naming bird species in North America.

“There are significant isolating and demeaning reminders of oppression, slavery, and genocide that reside within many of the English common names attached to birds in North America,” the letter stated. “Through the committees on Classification and Nomenclature, the AOS can play a crucial role in eliminating such barriers not only for ornithology, but for recreational birding as well.”

The letter, and a subsequent petition, spurred the American Ornithological Society to release a statement in July, stating it was committed to diversity and inclusion in the bird watching community. In August, the organization announced it would explore ways to promote diversity, including renaming birds.

Many of the lead proponents of the letter created Bird Names for Birds, a blog devoted to highlighting bird names that have roots in racism and colonialism. The blog has compiled an extensive list of birds named after figures who have slave-owning and colonialist pasts.

James Jameson, who the Jameson’s Firefinch is named after, explored Africa and believed Indigenous people were cannibals, according to the blog. His personal journal was filled with racist innuendos and recounts stories of his explorations, including an infamous account of when he offered to pay a group of tribal leaders to eat a 10-year-old girl.

“We have the opportunity to include everyone no matter who they are,” Jordan Rutter, a Bird Names for Birds moderator who was a lead signatory of the letter sent to the American Ornithological Society, said during Friday’s event. “This is our chance to include Indigenous people and Canadians and Mexicans and Jamaicans and everyone else impacted by these birds we all share.”

“No it won’t end racism, it won’t fix colonialism, but it’s something that we can do right now,” she said later in the discussion.

During the event, Kenn Kaufman, another field guide author, explained the need for change, saying it was hard to bird watch with his black friends since they might know the racist roots of the birds they were watching.

“If I’m birding with a couple of black friends in Georgia, for example, and we see a Bachman’s Sparrow, you know, we’re all aware of the fact that John Bachman wrote some really ugly things in support of white supremacy,” he said.

While the experts appeared to unanimously agree that renaming birds was necessary, it was unclear what the timeline would be moving forward. Kaufman and Sibley both noted that the logistics moving forward would be challenging.

Rutter admitted that renaming potentially hundreds of birds would be a “huge task” that would require a lot of time and effort.

The headline on this report was modified April 22 to clarify that the American Ornithological Society has not formally proposed this plan.