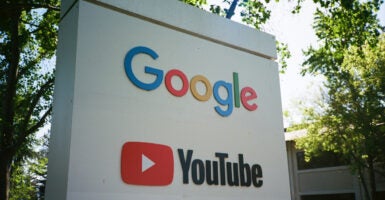 YouTube abruptly deleted some of Steven Crowder's videos, blocked him from uploading new videos for a week and permanently demonetized his channel. Photo: Sign on the company campus in Mountain View, California on April 14, 2018. (Photo: Smith Collection/Gado/Getty Images)

The most viewed conservative commentator on YouTube is Steven Crowder with his channel, Louder with Crowder.

He also sets up a table at college campuses, invites people to debate, and airs the debate unedited. One such video, titled, “There Are Two Genders: Change My Mind,” has been viewed 40 million times. Students don’t change Crowder’s mind, but he has a fair conversation.

Crowder won’t change my mind, either — (I believe gender can be on a spectrum) but in my new video, Crowder says he was influenced by me.

Louder With Crowder, he says, is “a cross between early David Letterman, maybe Howard Stern TV and John Stossel.”

I interviewed Crowder last week because YouTube abruptly deleted some of his videos, blocked him from uploading new videos for a week and permanently demonetized his channel. “It means I can make $0 on YouTube,” he explains.

YouTube even deleted his good reporting that showed Nevada election rolls include people with fake addresses. Why? YouTube says its “presidential election integrity policy” bans “false claims that widespread fraud, errors, or glitches changed the outcome of any past U.S. presidential election.”

But Crowder made no such claims, and what he said was true!

I’m also glad that he defends freedom. “Individuals, if given the freedom and opportunity to do so… do things relatively well,” he says.

But Crowder does some things that make me cringe.

In one video, he dresses as a stereotypical Chinese man and dunks a baby doll into a glass of water while an announcer says it’s “cultural appropriation month.”

I tell him: “Depending which things of yours I watch, I’m either honored or horrified that I influenced you. You’re drowning a blonde doll in a glass of water? I don’t even understand the joke.”

Crowder pushes back, explaining that the episode is about China’s one-child policy, which “resulted in countless girls being drowned in a bathtub. … I don’t think the joke is more offensive than the policy.”

Another “joke” that I didn’t get: Crowder mocks the part of the COVID-19 stimulus bill that gives $5 billion to farmers of color. He imitated a Black man, saying, “I’mma buy a plow, man…!”

Other media jumped on him for that. “Incredibly racist,” said Francesca Fiorentini of The Young Turks.

“That was a joke,” Crowder responds. “We go into an impression of hipsters in Detroit and African Americans living out on farms. It’s a fish out of water tale. It’s funny… I shouldn’t have to justify every joke that I make.”

I push back. “But the way you did it was mean, nasty. I don’t blame YouTube for saying, ‘I don’t want this on our channel.'”

This upset Crowder. “I thought you had a better sense of humor than that,” he replies.

Crowder points out that YouTube is not consistent about what it limits. Conservatives like him, he complains, are more likely to be censored.

He referred me to a YouTube video, viewed more than 100 million times, that portrays rapper Lil Nas X “being sodomized by Satan, and not only is that monetized, but it’s deemed child-friendly!”

The company, owned by Google, restricted my video in which Black people express skepticism about “systemic” American racism (YouTube labeled it “hateful… content likely to offend marginalized individuals”), one that criticized anti-school-choice politicians who send their kids to private school, one that says, “socialism leads to violence,” and others.

“There’s an ideological motivation beyond the profit motivation,” Crowder complains.

Now, he’s suing big tech companies, arguing that they break their terms of service by treating people like him differently.

“I am unapologetic,” Crowder concludes. “You don’t have to like what I say. But I think at the end of the day, you’ll be glad that there’s someone there doing it.”