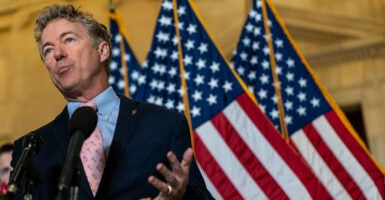 "Not only is this not Jim Crow," Sen. Rand Paul says of Georgia's new election law, but "the Democrat Party is the party of Jim Crow.” Pictured: Paul speaks to reporters March 4 during a press conference on Capitol Hill. (Photo: Kent Nishimura/Los Angeles Times/Getty Images)

Sen. Rand Paul, R-Ky., recalls an early and disappointing political experience in 1976, when he was 13 and his father lost a U.S. House seat in Texas by just 200 votes of about 200,000 cast. The loss, he says, led to his long-term interest in maintaining election integrity throughout the country.

“We contested the election. We found dead people voted,” Paul said Tuesday afternoon of the defeat of his father, former Rep. Ron Paul, during a virtual event organized by The Heritage Foundation. “We found 13 people who voted out of one household. We couldn’t find anyone who ever answered the door of that house.”

We found precincts, and this is in 1976, where the entire precinct was 100% for the opponent and zero for us, and the handwriting … appeared to be the same person that signed everybody in. They had a 100% turnout. Anomalies like that are not brand new, but no court would hear my father’s case.

During the Heritage event, titled “Safeguarding Our Elections,” Paul defended election integrity laws passed in states such as Kentucky, Iowa, and Georgia, this last where Democrats have characterized reforms as restrictions.

But, Paul said, more state legislatures should act to secure elections and Americans should push lawmakers to pass such laws:

This is something we can’t do in every state. But, in about 30 or 35 states, we have the ability to try to put election reform forward.

The Kentucky Republican said it’s not acceptable for President Joe Biden and other Democrats to refer to election reforms as “Jim Crow” laws, which were racist laws in the South that barred black Americans from voting as well as from employment, housing, and educational opportunities. Such laws persisted well into the 1960s.

“For Democrats to stand up and claim ‘Jim Crow’ should be called out on the face of it as ridiculous, and we should throw it right back in their face. Not only is this not Jim Crow, the Democrat Party is the party of Jim Crow,” Paul said.

“You have to look long and hard in history to find a Republican that voted for a Jim Crow law. In my state, when they passed Jim Crow laws at the turn of the last century, 1900, 1905, these despicable laws were passed entirely by Democrats. Every Republican voted no. Unfortunately, we only had a handful of Republicans in Kentucky at the time,” he said at the Heritage event.

Paul said the law had little chance of passing the Senate unless Democrats kill the filibuster, which two less liberal Democrats, Sens. Kyrsten Sinema of Arizona and Joe Manchin of West Virginia, have indicated they wouldn’t vote to do.

Paul noted that including taxpayer funding of campaigns could be the most compelling point against the law:

If you want to convince your friends of how bad of an idea this is, tell your friends—whether they are conservative or liberal—that, ‘See this unholy litany of political ads that are just disgusting beyond belief and fill the airwaves with nonsense and go on and on to the tune of millions of dollars. Do you want to pay for those?’ Because that’s basically what this will be.

So many people get tired of political ads and they can’t turn their TV channel fast enough. Guess what? This bill would require the taxpayer to pay for political ads. I think that ought to be enough to unite Republicans and Democrats that it’s a terrible idea.

One famous Democrat who backed election reforms was former President Jimmy Carter, who co-chaired the Carter-Baker Commission in 2005.

Carter, a Democrat, may have had good reason to do so, noted Hans von Spakovsky, a senior legal fellow at The Heritage Foundation who moderated the discussion with Paul.

“Jimmy Carter, the first time he ran for the state Legislature in Georgia, had exactly the same problem,” von Spakovsky said, referring to the 1976 congressional race in Texas that Paul’s father lost.

“He had to go to court because the local political machine basically stole his election,” von Spakovsky said of Carter, “which I think is one of the reasons he has been, I think, a bit more concerned about this than other folks on the other side of the political aisle.”

Paul cited irregularities in the 2020 presidential election, but noted that he opposed efforts by then-President Donald Trump to overturn his loss to Biden, the Democratic nominee, in certain states. The Kentucky Republican argued that if Congress begins to intervene in state elections outcomes, it could set a precedent.

“The Electoral College system we have says that states certify elections. I didn’t like the outcome. I did think there were irregularities, is a nice way to put it,” Paul said.

“But I also felt like if the [state] secretary of state and or the legislature, or the governor in many cases, certified the votes, I really don’t think it’s a good or a wise system to have Congress vote to overturn certified electors.”