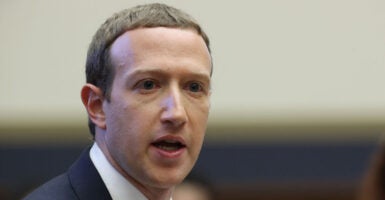 Senate Bill 207 would require private funds like the millions of dollars in grants handed out by the Center for Tech and Civic Life first go to the Wisconsin Elections Commission. They would then be evenly distributed to local election offices statewide on a per capita basis.

“This bill is about fairness,” said state Sen. Duey Stroebel, R-Saukville, co-author of the legislation. Stroebel, a member of the committee, asserts there were “significant strings attached” to the Center for Tech and Civic Life’s generous grants, that the money wasn’t an “altruistic blank check donation.”

The Center for Tech and Civic Life, which received $350 million in contributions from Facebook CEO Mark Zuckerberg and his wife, distributed more than $8 million in election “safety and security” grants last year to Wisconsin’s five largest cities—Milwaukee, Madison, Green Bay, Kenosha, and Racine. The cities also happen to be Democratic strongholds.

The “Wisconsin 5,” as the cities were known, had to sign contracts that required them to do what the Center for Tech and Civic Life wanted or they could lose the funding.

Emails show Green Bay and Milwaukee worked with a Center for Tech and Civic Life partner group, the National Vote at Home Institute. Longtime Democratic operative Michael Spitzer-Rubenstein, who served as Wisconsin lead for the institute, was integrally involved in preparing for and administering November’s election in Green Bay and Milwaukee.

The city of Milwaukee opposes the bill. Woodall-Vogg said she doesn’t know how Wisconsin’s largest city would have gotten along without the generosity of the Center for Tech and Civic Life.

She also told committee members that Milwaukee received more money than previously reported—a total of $3.4 million from the Zuckerberg-funded group. The funding more than doubled Milwaukee’s election budget for 2020. Is it any wonder Woodall-Vogg breathlessly defended her friends at the Center for Tech and Civic Life and its “partner” organizations?

She downplayed the idea that there were “strings attached” to the grant funding, despite the contract’s clawback provisions. She said the funding covered important “technical assistance,” promotional materials, and COVID-19 protection equipment. It also afforded hazard pay for poll workers who Woodall-Vogg demanded deserved a “livable wage.”

“It goes without saying 2020 was an unprecedented year for elections,” Woodall-Vogg told the committee. “Now is not the time to reduce appropriations,” she added. Now is the time to “find creative nonpartisan funding sources, which will alleviate the burden on taxpayers.”

But proponents of the bill worry the Center for Tech and Civic Life used such unprecedented times to game the election system. They certainly left the perception of a conflict, Stroebel said, and that’s enough to warrant reform.

State Sen. Kathy Bernier, R-Chippewa Falls, chairwoman of the committee, put the question to Milwaukee County Clerk George Christenson, who also opposed the bill. She noted Milwaukee Mayor Tom Barrett’s meddling in the April 2020 election and emails showing Green Bay’s mayor doing the same in the months leading up to the November election.

Ardis Cerny, a long-time Wisconsin election watcher, said legislators can write all the laws they want. It won’t matter.

The committee also took up Senate Bill 208, which would require the Elections Commission to post online its meeting minutes within 24 hours of a meeting.

Sponsors say the commission waits until its following meeting to publish the previous meeting’s minutes. That keeps the public in the dark about critical election law rulings the commission makes.

State Sen. Kelda Roys, D-Madison, argued there’s no need to rush on the meeting minutes. The committee member said the public can file an open records request if they want the information.

“To think you have to go to an open records request to ensure transparency in government is a place I don’t want to go to,” Stroebel said.