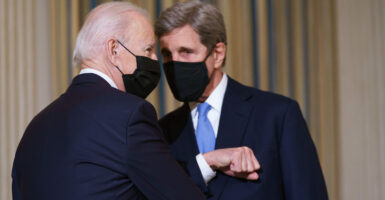 Wright, the founder of the Deep South Center for Environmental Justice, is joined on the council by Jade Begay of the Indigenous Environmental Network, who co-wrote a 2018 op-ed in EcoWatch contending that climate change is “colonialism” and “cultural genocide.”

That is why President Biden and I are committed to addressing environmental injustice. This historic White House Environmental Justice Advisory Council will ensure that our administration’s work is informed by the insights, expertise, and lived experience of environmental justice leaders from across the nation.

The White House did not immediately respond to an inquiry from The Daily Signal on Friday.

Biden has been aggressive on environmental issues since taking office in January.

“The [fiscal year] 2022 discretionary request for EPA makes historic investments to tackle the climate crisis and to make sure that all communities, regardless of their [ZIP] code, have clean air, clean water, and safe places to live and work,” EPA Administrator Michael S. Regan said Friday in a statement.

The council has 26 members representing six regions across the country as well as Puerto Rico, plus officials from the EPA and the White House Council on Environmental Quality.

Biden also appointed Susana Almanza, founder of the Austin, Texas-based People Organized in Defense of Earth and Her Resources, to the council.

A mostly favorable 2019 article in Hilltop Views, the student newspaper of St. Edward’s University in Austin, noted that Almanza’s office had a poster on the wall of Che Guevara, a murderous military commander in Fidel Castro’s Cuban communist regime.

The article quoted Almanza saying of energy companies, “we are fighting big monsters; they’re not little ones.” She added that zoning of polluting chemical plants “look[ed] at people of color as indispensable [sic] … like ‘it’s OK if we pollute them and if they die or if they get cancer.’”

Biden also named Tom Cormons, of Appalachian Voices—an environmental group operating in Virginia, North Carolina, and Tennessee—to the council. Cormons wrote in 2012 that fossil fuels pose the greatest threat to the next generation when commenting on a project by Dominion Virginia Power.

“Dominion plans to continue locking us into dependence on the fossil fuels that are one of the greatest threats to our children’s future,” Cormons wrote in a piece published by C-Ville, the website of a magazine covering Charlottesville, Virginia.

Seven members of Biden’s environmental justice council, including Wright, were signatories to a July 2019 Equitable and Just National Climate Platform, which was a partnership between the National Resources Defense Council and the Center for American Progress, both advocacy groups on the left.

For too long, systemic racism and injustice has left economically disadvantaged communities, tribal communities, and communities of color exposed to the highest levels of toxic pollution from the burning of fossil fuels.

These vulnerable communities are increasingly affected by climate change, and they also have the fewest resources to prepare for and recover from its harm and hazard.

The platform also asserts: “Unless justice and equity are central aspects of our climate agenda, the inequality of the carbon-based economy will be replicated as we build a new clean and renewable energy economy.”

“People often forget the legacies of slavery, of Jim Crow segregation, and out of that chain, laws that were deeply entrenched within the social structure of the Southern environment that worsened our quality of life,” she told Vox.

“That legacy resulted in communities that had been inundated with toxic facilities, impacting our health, the value of the homes where people live, causing them to have higher cancer rates, and to eventually be relocated from within the midst of these facilities,” Wright said.

“I urge Secretary Haaland to undertake an environmental justice review of the federal oil and gas program in order to address the racial discrimination that is central to oil and gas operations,” Wright said.

Both historically and in the present, climate change itself is thoroughly tied to colonial practices. Greenhouse-gas production over the last two centuries hinged on the dispossession of Indigenous lands and resources.

In an interview with gal-dem.com, a media outlet that describes itself as a publication telling stories of people of color and “marginalized genders,” Begay said, “We are the ones who know how to maintain ecological balance and the most important action needed now is to stop all new fossil fuel development.”