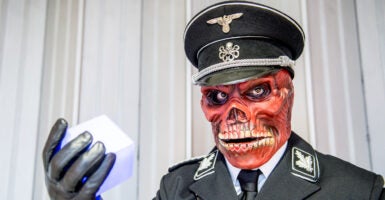 The Marvel Comics villain Red Skull has been used to lampoon Jordan Peterson in a comic written by former Atlantic contributor Ta-Nehisi Coates. Pictured: A guest at Comic Con in Birmingham, England dresses up as the Red Skull villain. (Photo: Ollie Millington/Getty Images)

“Certain elements of our community are threatening to get people fired,” tweeted Yale professor Nicholas Christakis on Apr. 3. “Even if someone just poses a question, or expresses a conflicting view, you’re immediately labeled a problem, a white supremacist, and people will say, ‘Find out where they work.’”

Christakis was quoting an excerpt from a recent piece in The Atlantic, and famed Canadian psychologist Jordan Peterson agreed that this was concerning, pointing out that The Atlantic itself helped to foster this atmosphere of witch hunting.

Then, in an ironic twist, a Twitter user revealed to Peterson that Atlantic alumnus Ta-Nehisi Coates had brought his brand of woke ideology to comic books, and had based his interpretation of the villain Red Skull—the comic book equivalent of Hitler—on Peterson.

Peterson is no stranger to controversy. Depending on who you ask, he’s either a lifesaving guru or the devil incarnate.

The 58-year-old Canadian psychologist first garnered attention from a series of videos he posted in 2016 where he criticized Canada’s bill C-16, which is similar to the Equality Act in the U.S.

The bill introduced gender identity and expression as a protected class, which Peterson argued would lead to government-compelled speech, as people would be forced to use the preferred pronouns of transgender individuals. He decried the bill as the government using force to push an ideology.

He followed up on the video’s success with a self-help book, “12 Rules for Life: An Antidote to Chaos,” which sold over 5 million copies worldwide and became a global bestseller. The book particularly resonated with young men adrift in the world who were seeking some form of structure.

Rules like “stand up straight with your shoulders back” and “make friends with people who want the best for you” were a force for good in these men’s lives, and drove Peterson to new heights of popularity.

But as popular as Peterson is, he has his fair share of detractors. His outspoken criticism of woke culture and identity politics have opponents claiming he’s everything from a white supremacist to a Nazi.

Coates is most famous for writing woke screeds for The Atlantic. His portfolio includes articles advocating reparations and calling Dr. Ben Carson a bigot, as well as books where he demonizes all Trump supporters as white racists and calls the first responders on 9/11 “menaces of nature.”

This, in Marvel Comics’ mind, made him the perfect choice to write a series of “Captain America” comics.

And while Coates has been in the process of putrefying the Captain America brand for a few years now, his story of butchering a beloved pop culture franchise in the name of identity politics is not unique in the modern media landscape.

White supremacy features as the overarching evil of the show, and each new episode revels in showing the audience that white people are not to be trusted. The white characters in the show are depicted only as openly racist skinheads or secretly evil Klansmen, complete with robes hidden away in the closet.

While the phantasm of white supremacy lurks in many pieces of media today, what makes Coates’ comparison of Peterson to comic-book Hitler stand out is the contrast between what Peterson represents versus what Coates wants him to be.

The “Watchmen” adaptation is a clumsy attempt to frame white supremacists as America’s top threat, but nobody will argue that the Klan is right or that neo-Nazi skinheads should be portrayed positively.

To call Peterson a Nazi is beyond absurd. He was so shaken by the horrors of the 20th century that he spent years researching the Nazi and communist regimes in order to better prepare his students to resist evil ideology.

But Coates views anything that competes with his own ideology as white supremacy, and will attempt to smear Peterson as some kind of fascist for daring to suggest identity politics is an awful philosophy.

In a speech that could have been ripped straight out of a Peterson book, in a Marvel comic that predates Coates, Captain America gives one of the most defining speeches of his career:

When the mob and the press and the whole world tell you to move, your job is to plant yourself like a tree beside the river of truth, and tell the whole world, ‘No, you move.’

Let us then return to that principle. Coates and his ilk are wrong. It’s time we straighten our backs and let them know it.