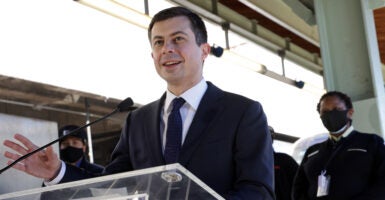 You would need to trust Secretary of Transportation Pete Buttigieg's bureaucracy—or some entity acting on the government's behalf—to put a tracker in your car for a vehicle miles traveled taxing system to work. Pictured: Buttigieg speaks to Amtrak employees during a Feb. 5 visit at Union Station in Washington, D.C. (Photo: Alex Wong/Getty Images)

One American gets up in the morning, gets in his car, and drives down a congested highway to work.

Another wakes at noon and rides a subway to a saloon.

Which of these two—if America’s future takes a wrong turn—would pay what might be called the “Buttigieg tax”?

CNBC’s Kayla Tausche asked Transportation Secretary Pete Buttigieg in a March 26 interview what sort of taxes he perceived as possible ways to pay for infrastructure projects.

“First, a gas tax,” she asked. “You called it old-fashioned to raise the gas tax. Do you still believe that? Could that go up?”

“Well,” said Buttigieg, “the gas tax has traditionally been part of how we fund the Highway Trust Fund, but we know that it can’t be the answer forever because we’re going to be using less and less gas.

“We’re trying to electrify the vehicle fleet,” he explained.

“He is proposing a $174 billion investment to win the [electric vehicle] market,” said a White House fact sheet on Biden’s American Jobs Plan. “His plan will enable automakers to spur domestic supply chains from raw materials to parts, retool factories to compete globally, and support American workers to make batteries and [electric vehicles]. It will give consumers point of sale rebates and tax incentives to buy American-made [electric vehicles], while ensuring that these vehicles are affordable for all families and manufactured by workers with good jobs.”

But, as even Buttigieg conceded, this would create at least one problem: If an ever-increasing number of Americans start driving electric cars, what will happen to the federal revenue derived from the tax on gasoline, which is now used to fund transportation infrastructure through the Highway Trust Fund?

“What about a mileage-based tax?” Tausche asked Buttigieg.

This is a tax the government would charge a person for every mile they drive.

“I think that shows a lot of promise,” said Buttigieg.

“If we believe in that so-called user-pays principle, the idea that part of how we pay for roads is you pay based on how much you drive, the gas tax used to be the obvious way to do it,” he said. “It’s not anymore.”

“So, a so-called vehicle miles traveled tax, or mileage tax, whatever you want to call it, could be the way to do it,” Buttigieg said.

But how would the government know how many miles you drove?

The commission recommended that the federal government establish a “vehicle miles traveled,” or VMT, taxing system for cars.

“The Commission cast a wide net, reviewed many funding alternatives, and concluded that indeed the most viable approach to efficiently fund federal investment in surface transportation in the medium to long run will be a user charge system based more directly on miles driven (and potentially on factors such as time of day, type of road, and vehicle weight and fuel economy) rather than indirectly on fuel consumed,” said its report.

“However much revenue Congress decides to raise at the federal level, the Commission believes it is critical to move forward with a [vehicle miles traveled] fee system,” its report concluded.

Ultimately, this would require tracking the miles driven by every car. The commission conceded this would raise what it called “privacy concerns.”

“There is a very real concern among policy makers and the general public that a road pricing system that charges based on when and where individuals travel inherently threatens privacy,” said its report, adding:

Indeed, if these systems are not designed and implemented properly, the threat to privacy could be very real. This leads to two significant challenges that must be overcome if comprehensive pricing is to be seriously considered in the United States: first, any system must ensure adequate safeguards to personal privacy; second, the public agency or agencies charged with implementing comprehensive pricing must gain the confidence of policy makers and the public that these safeguards exist and will be effective.

Bottom line: You would need to trust Buttigieg’s bureaucracy—or some entity acting on the government’s behalf—to put a tracker in your car.

The commission suggested that privacy could be protected if the satellite-tracked movements of an American’s car were stored only in the car itself.

“Specifically, these designs center on the use of an on-board unit (one in each vehicle) that would contain a GPS receiver that receives satellite signals enabling it to calculate vehicle location in real time and a computer that calculates the associated [vehicle miles traveled] charge,” said the report.

“The key point is that the satellite signal is only a one-way signal ‘telling’ the car receiver where it is, and therefore outside the vehicle there is no tracking of where individuals travel,” said the report. “In essence, this receiving function of a [vehicle miles traveled] system would function like the GPS devices that millions of Americans have already installed in their cars without worry of privacy loss.”

Then, perhaps, the government could have employers withhold the vehicle miles traveled tax from the paychecks of people who insist on driving to work—instead of taking the subway to a saloon.