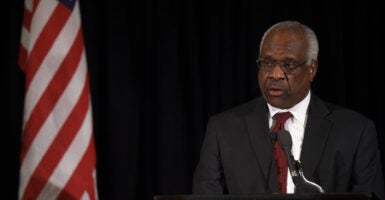 Supreme Court Justice Clarence Thomas—seen here speaking at a memorial service for the late Justice Antonin Scalia on March 1, 2016, in Washington—mused this week in a concurring opinion on the difficulties of “applying old doctrines" regarding free speech "to new digital platforms.” (Photo: Susan Walsh/Getty Images)

On April 5, the Supreme Court declined to hear Biden v. Knight, a case involving the First Amendment and digital platforms.

Justice Clarence Thomas agreed with the court’s decision, but wrote a concurring opinion to highlight what he considers to be the difficulties of “applying old doctrines to new digital platforms.”

The opinion was groundbreaking because, as Thomas explained, it applied old doctrines developed for physical spaces to the new online public forums. When Trump left office, the case became moot, so the Supreme Court dismissed it.

Thomas took the opportunity, however, to highlight some of the legal difficulties that the courts will continue to face as they’re asked to apply existing First Amendment doctrines to new digital arenas.

Thomas’ opinion has no effect on the outcome of this particular case, since he agreed that the case should be dismissed as moot. Accordingly, the best way to read it is as a thought experiment to wrestle with what Thomas thinks are novel issues and to invite legal scholars to join in. That’s a common practice by the justices. Justice Neil Gorsuch, in particular, is known for that.

His opinion is not, contrary to some hysterical pundits, an assault on the First Amendment or on social media companies.

Consider how Thomas begins his opinion. He noted that the 2nd Circuit’s opinion did not sit well with the Supreme Court’s precedents or with his own views of those precedents.

He called it “odd” to say that a Twitter account is a public forum when a private company retains ultimate control over it, and he noted that public forums are consistently described as “government-controlled spaces,” which is not a label easily applied to a Twitter account.

He also appeared to reject outright the idea that a social media company could violate the First Amendment by censoring someone. Another case, Freedom Watch v. Google, raised that question, and Thomas said the court “properly reject[ed]” it.

Still, he noted that it was historically unprecedented that any private party had as much control over speech—including speech by government officials—as some of the current digital platforms do.

It’s inevitable, according to Thomas, that the courts will have to wrestle with what this means, so how should they approach it?

He turned to an area of the law where doctrine has developed to address significant private power over public rights; namely, common carriers. Although common carriers, like trains and communication networks, are privately owned, the law nevertheless imposes on them the obligation to serve everyone without discrimination.

Can this framework be applied to social media companies?

Thomas leans toward answering “yes,” but he noted that there are many unresolved legal and factual issues, and so he does not reach a conclusion.

As he sees it, there are many reasons why a common carrier approach doesn’t fit well, such as social platforms not being natural monopolies and their having market competition.

On the one hand, Thomas reasoned, digital platforms, like communication networks, “carry information from one user to another.” They also “hold themselves out as organizations that focus on distributing the speech of the broader public.”

Moreover, he continued, dominant internet platforms such as Facebook, Amazon, and Google have, because of their market power, “enormous control over speech,” such that the alternatives are not comparable.

But on the other hand, Thomas noted that social media companies “have their own First Amendment interests,” although historically those interests were subject to regulation. What’s more, not all digital platforms have market power, and there’s an ongoing scholarly debate about whether market power is necessary for something to be a common carrier.

He then turned his attention to potential legislative developments. Even if digital platforms are not common carriers, is it possible that Congress or state legislatures could regulate them like places of public accommodation?

Thomas wrote that, like traditional places of public accommodation, digital platforms provide “entertainment [and] other services to the public,” but noted that there’s a split among the circuit courts about whether that applies to anything other than physical locations.

Still, all of those questions remain unsettled, and Thomas acknowledged no clear answers. He said the aim should be “to ensure that speech is not smothered” as we consider the “interesting and important questions” of whether “power matters for purposes of the First Amendment and the extent to which that power could lawfully be modified.”