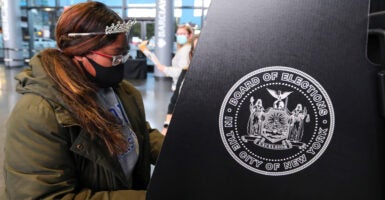 A voter casts a ballot at a polling station in New York City on Nov. 3. New York is among several blue states that have more limitations on voting than Georgia, despite Democrats' criticism of the latter. (Photo: Wang Ying/Xinhua/Getty Images)

Democrats have repeatedly denounced the new Georgia election integrity law that requires IDs for absentee ballots, but seldom criticize blue states that have comparable laws on their books—or in some cases, laws making it more difficult to vote than in Georgia.

“Overall, the Georgia law is pretty much in the mainstream and is not regressive or restrictive,” Jason Snead, executive director of the Honest Elections Project, told The Daily Signal. “The availability of absentee ballots and early voting is a lot more progressive than what’s in blue states.”

Here’s a look at how the new Georgia election law stacks up to voting laws in Democrat-leaning blue states.

President Joe Biden just as easily could have been referring to New York’s state election laws when he said, without specifying a state, that “it’s sick, it’s sick,” citing as an example “[d]eciding in some states that you cannot bring water to people standing in line waiting to vote.”

New York prohibits “providing meat, drink, tobacco, refreshment or other provision with a retail value of more than [$1]” within 100 feet of the entrance to polling places, according to the National Conference of State Legislatures.

Georgia has caught up with both New York and Montana as part of its new election law prohibiting campaign workers from handing out food or drinks to voters standing in line. The Georgia law prohibits food and drink distribution by campaign workers within 150 feet of the entrance to the polling station.

Montana is the only other state besides New York and Georgia that prohibits campaign workers from handing out drinks.

Georgia’s law now allows for 17 days of early in-person voting. New York, by contrast, allows only for 10 days of in-person voting, according to the National Conference of State Legislatures.

A New York Post editorial noted that the Empire State fares poorly on making it easier to vote when compared with Georgia, noting both more time to vote early and Georgia’s “no excuse” absentee voting. New York requires voters casting absentee ballots to provide a reason why they can’t come to the polls on Election Day.

“Yes, Georgia will now ask for a valid ID to vote absentee, but lets you out of the requirement if you attest that you don’t have one,” the newspaper noted, adding: “New York even has a ban similar to Georgia’s new prohibition on the distribution of food and drink in voting lines … . In both cases, it’s an effort to prevent electioneering.”

Unlike Georgia, however, Biden’s home state of Delaware has never allowed early in-person voting. The state will begin to do so in 2022, according to the National Conference of State Legislatures.

“I was just actually looking at a comparison of the two states that somebody did [that] one of our legislators … sent out,” Georgia Gov. Brian Kemp, a Republican, told The Daily Signal last week. “It’s really interesting, especially when you look at the opportunities to vote early in our state versus Delaware. I mean, it’s a world of difference. The president should be worried about his own state, not the great state of Georgia.”

Moreover, even when Delaware does allow it, Georgia will still provide seven more days of early in-person voting than the state the president represented in the Senate from 1973 to 2009.

“Delaware offers early voting beginning in 2022 for 10 days before the election, a little more than half the number of days for early voting in Georgia,” said Snead, of the Honest Elections Project. “This undercuts the narrative that Georgia is trying to restrict voting.”

Similar to Georgia, Delaware under its new law will allow Saturday and Sunday voting.

We were curious what the early-voting rules were in Delaware, Biden’s home state. It turns out Delaware did not allow any in-person early voting in 2020. A law signed in 2019 will permit early voting starting in 2022. (Voting hours are 7 a.m. to 8 p.m. on Election Day.)

Delaware, the first state to ratify the U.S. Constitution, is among the last in the country to allow early voting, as 43 states allow it in some form, according to the National Conference of State Legislatures. The average for early voting is 19 days.

Major League Baseball announced April 2 that it was moving its 2021 All-Star Game from Atlanta to Denver to punish Georgia for its new election integrity law.

In several respects, however, Colorado’s voting laws are more strict. It’s not a clear-cut comparison, though, because Colorado mails out ballots to all active voters, Snead said.

But voter service and polling centers must be open 15 days before an election, according to the National Conference of State Legislatures, and that’s two fewer days than Georgia allows for early in-person voting.

Moreover, Colorado’s law states, “If you are voting by mail for the first time, you may also need to provide a photocopy of your identification when you return your mail ballot.”

That’s similar, though not identical, to the new Georgia law that will require each absentee ballot to have either a voter’s driver’s license number, the last four digits of his or her Social Security number, or another form of identification in place of signature verification.

“To vote in Colorado, a person needs photo identification, just as they do at the will-call [ticket] window at Coors Field,” wrote David Harsanyi in a National Review analysis contending Colorado has comparable, if not more restrictive, voting laws than Georgia. Coors Field in Denver, where the Colorado Rockies play, will host the relocated All-Star Game on July 13.

In March, Stacey Abrams, the Democrat who lost the 2018 race for governor of Georgia, made a virtual appearance in New Jersey to deliver an online speech celebrating the state’s new early-voting law that Gov. Phil Murphy, a fellow Democrat, signed.

The praise came despite the fact the New Jersey law provides nine fewer days of early voting than the Georgia law, which Abrams has denounced as “Jim Crow 2.0.”

“I am so excited to be looking up, looking at New Jersey, knowing that New Jersey is taking us in the right direction,” Abrams said.

“To Gov. Murphy, to the state Legislature, to the secretary of state, and to all the allies who made this possible, you have my heartiest not only congratulations, but you have my gratitude because you are showing the way to a better democracy and a better future for us all,” she added.

Specifically, the New Jersey law will allow nine days of in-person early voting starting on the 10th day before an election and ending the Sunday before.

That contrasts with Georgia, which now has 17 days of early in-person voting.

So, that’s one area where the Georgia law makes it tougher to postpone applications for an absentee ballot, in comparison to 36 states that allow ballots to be requested seven days or less before Election Day, according to the National Conference of State Legislatures.

The strictest deadline is Rhode Island’s, requiring absentee ballot requests to be submitted 21 days before Election Day, according to the legislatures group. The state allows emergency requests within 20 days of an election.

The 11-day deadline puts Georgia on a par with Texas, Arizona, Idaho, and Iowa. Florida has a 10-day rule, while Indiana sets a 12-day limit. Nebraska requires requests to be submitted by the third Friday before the election, while Missouri requires applications be made two Wednesdays before the election.

While closely contested in a few elections, Minnesota is generally viewed as a blue state, having last gone to a Republican presidential candidate in 1972. It was the lone Democratic holdout when Republican President Ronald Reagan carried 49 states in 1984 against Minnesota favorite son Walter Mondale, the state’s former U.S. senator and later vice president.

One area where Georgia caught up with Minnesota is in requiring a driver’s license or other ID for absentee ballot verification.

According to the National Conference of State Legislatures, Ohio and Kansas are the only other states joining Minnesota and Georgia in requiring voters’ driver’s license numbers for absentee ballots.

Wisconsin is generally a battleground state, but it leans blue at the presidential level, as 2016 was an aberration.

The Badger State requires absentee ballot applications to include photo identification information. That’s fewer options than in Georgia, which requires voters to provide either their driver’s license number, the last four digits of their Social Security number, or another form of identification.

Among the criticisms of the new Georgia law is the handling of votes in the wrong precinct. If a voter shows up at the wrong precinct, local election officials are directed to tell voters to travel to their correct precinct to cast a vote.

However, the Georgia law has an exception for voters who show up at the wrong precinct after 5 p.m. on Election Day. Because polls close at 7 p.m., the election officials will accept a provisional ballot from the voter who arrived at the wrong location within two hours of the polls closing.

However, half the states—including some of the bluest states—do not count provisional ballots if cast at the wrong precinct, according to the National Conference of State Legislatures.