Earmarks a Tool of the Swamp, Not the Constitution 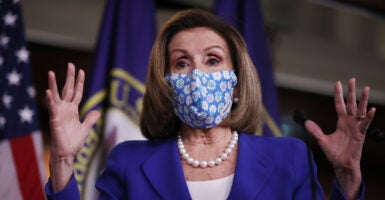 You won’t find so much as a tweet from congressional Republicans touting the move, but the House GOP Conference changed its rules to lift the earmark ban and added a statement that earmarks could help “execute Congress’ Article I authority to control the power of the purse.”

So on one hand, it is refreshing to hear some lawmakers make gestures toward reclaiming the constitutional powers that rightfully belong to the peoples’ elected representatives.

But the power of the purse does not give Congress a license to spend on anything it wants, irrespective of the guardrails imposed by the Constitution.

The authorities of the federal government are, in the words of Madison, “few and defined.”

As described by constitutional scholar John Eastman, federal spending is required to “be for the ‘general’ (that is, national) welfare and not for purely local or regional benefit.” The intentional wording “general welfare” is a contrast to policies that would provide a particular, parochial, local, or limited benefit.

The spending and general welfare clauses are followed by an enumeration of specific powers. Congress has no legitimate power to spend for purposes beyond what the enumerated powers allow. This important aspect of the Constitution and the principle of federalism are reinforced by the 10th Amendment.

Earmark proponents claim that individual members of Congress have a unique understanding of their districts and states and that allowing them to direct federal funds to special interests back home is an important way to address particular local needs for their communities.

But this argument is itself a denial that the proposed funding even pretends to be for the general, national welfare. No one thought that the earmark for the infamous “Bridge to Nowhere” was meant to be for the good of the whole country.

And how many earmark sponsors have even attempted to make the case that their special-interest spending project is for carrying out a specific enumerated power?

A lawmaker trying to justify funneling taxpayer funds to the Lobster Institute, renovating an abandoned opera house in a small town, or $3 million in the defense spending bill for a golf program at a center named for the earmark-sponsoring congressman would be sent back to remedial constitutional law class.

Earmarks for special interests and local projects are not a valid tool for Congress to exercise its legitimate Article I powers.

Members of Congress—and especially their constituents—should take very seriously the project of restoring the proper constitutional order. Appropriately using the power of the purse is an important aspect of that effort to empower elected representatives of the people.

Congress should wind down programs that are outside the bounds of the enumerated powers. This includes respecting federalism and the 10th Amendment by allowing issues more appropriately handled by the private sector or at the state and local level to be done so.

And there are many other policies and reforms that would also be more effective ways for Congress to properly exercise its Article I powers than earmarks.

It could, for example, start requiring congressional approval for major regulations. It could start taking the prohibition on funding unauthorized programs seriously. It could stop ceding authority over the debt limit.

Earmarks encourage wasteful spending and spawn corruption. There is nothing more emblematic of the Washington “swamp” than earmarks. Senate Republicans should continue standing strong and reject earmarks.