What Is ‘No Place for Hate’ Program Actually Teaching K-12 Students? 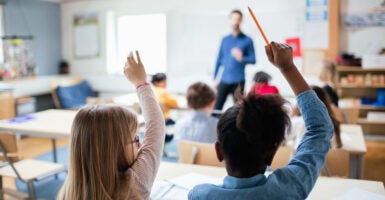 Our kids should be activists, according to the “No Place for Hate” curriculum. But is it really K-12 schools’ role to impose such views on our children? (Photo: Maskot/Getty Images)

Will Johnson is a Denver-based father of three school-age children and frequently writes on education-related topics.

Americans agree that schools should be no place for hate. Instead, we should foster respect, and reject bullying and racism. But how do we best achieve that shared goal?

A program called “No Place for Hate,” now in more than 1,600 K-12 schools, attempts to answer that, but in so doing raises questions about the ideological prism through which it views the problem and about its approach to solving it.

“No Place for Hate” has some worthy aims, such as condemning bullying and promoting empathy. But there are good reasons to question whether it’s accomplishing what it claims.

Concerns begin with the program’s requirements. To receive the “No Place for Hate” designation, at least 75% of a school’s students must sign a “pledge.” It is said to be voluntary, but some teachers are directed to repeatedly urge students who haven’t signed the pledge to do so.

The pledge itself extols shared virtues. But do kids really need to sign the pledge to be seen as kind, respectful, and rejecting hate?

Second, a school that implements the program must cede significant power over day-to-day operations to the national activist group that sponsors it, the Anti-Defamation League.

Schools “are expected to notify [the Anti-Defamation League] when any incident of bias, bullying, discrimination or harassment occurs” and work with it to address them, or risk revocation of its “No Place for Hate” designation, according to the program’s handbook.

While schools shouldn’t tolerate those behaviors, do they need to yield authority to an outside organization to resolve them?

Schools are strongly encouraged to use Anti-Defamation League-supplied curriculum, and students must complete three approved activities throughout the year.

The program rightly strives for harmony and respect for all, but is the best way to achieve those goals to keep kids hyperfocused on their differences, instruct that those differences determine their identity, and suggest their identity dictates whether they’re a member of a dominant or victim group?

That message directly contradicts judging someone by “the content of their character.” Do they think children should be taught that Martin Luther King Jr.’s empowering vision—a cornerstone of our nation’s civil rights movement—was wrong?

Yes, prejudice still exists, and we should work to eradicate it. But is it as prominent in our communities and nation as the program asserts?

Kids should learn about our country’s past sins, but what are the effects on them of ignoring the significant progress we’ve made?

“No Place for Hate” exhorts students to “move on from kindness,” claiming they must “understand how to engage in changing systems and society.”

Our kids should be activists, according to “No Place for Hate.” Volunteering at a soup kitchen or tutoring others isn’t enough. They must also advocate for affordable housing and challenge school-funding inequities to effect “systemic change.”

Is it really K-12 schools’ role to impose those views on our children?

Furthermore, social issues like those are often complex and controversial, and experts disagree on their root causes and the most effective ways to address them. If our impressionable children are to be social activists, it’s only right we present them with a diversity of thought on such matters.

The program also instructs that kids shouldn’t “misgender” their peers. It encourages teachers to ask students what their gender pronouns are, to teach material on the subject, and to correct students when they don’t use their peers’ chosen pronouns.

We should treat everyone with dignity, but is it really the state’s role to delve into this controversial issue and teach children how “fluid” their gender “options” are?

It’s important for children to strive for social harmony and to understand their words’ impact. But are we forming courageous, self-confident kids when we teach them to constantly spot “microaggressions” and that their identities define their place on the “power” continuum?

Jonathan Haidt, a social psychologist at New York University, explains that this approach is more likely to produce anger, anxiety, and hopelessness—traits that are rapidly rising among today’s youth.

Conversely, research shows that teaching resiliency and self-determination “leads to greater health, happiness, success in school, and success at work.”

The core question, then, is this: “What is the purpose of publicly financed education?” Is it to make kids hyperaware of their differences and turn them into political activists, or is it to teach them how to think, not what to think?

Apparently, “No Place for Hate” views the former as a primary purpose of education. Is that how we want our school-funding tax dollars used?

We can agree with many of the program’s ends—such as harmony, bravery, and eradicating racism. But we should ask whether its means are the best way to achieve those ends, and express our concerns to school administrators and public officials for the sake of our kids, communities, and country.