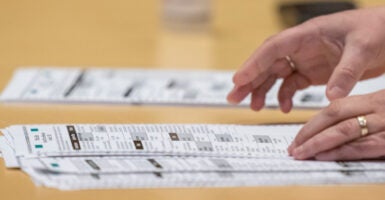 The city clerk of Green Bay, Wisconsin, grew so frustrated with a Democratic operative's access and influence in the election process that she took a leave of absence and later resigned. Pictured: An election worker shows ballots to representatives of President Donald Trump during the recount Nov. 20 for Dane County in Madison, Wisconsin. (Photo: Andy Manis/Getty Images)

MADISON, Wis.—Kris Teske was forced to put up with a lot of outside meddling in the weeks and months leading up to November’s presidential election.

But as an election official, the frustrated city clerk of Green Bay, Wisconsin, made it clear to her superior that she would not break the law, according to new emails obtained by Wisconsin Spotlight.

“There is one more thing I want to say: If I am ever asked to do anything against the law the answer will be NO!” Teske wrote in an Aug. 26 email to Diana Ellenbecker, Green Bay’s finance director and Teske’s immediate supervisor.

As a Wisconsin Spotlight investigation has uncovered, liberal third-party groups funded by Facebook CEO Mark Zuckerberg were heavily involved in the elections of Wisconsin’s five largest cities: Milwaukee, Madison, Green Bay, Kenosha, and Racine. Zuckerberg and his wife donated $350 million to the Center for Tech and Civic Life, a left-leaning voter rights and election group.

Green Bay received more than $1.6 million in funding from the Center for Tech and Civic Life, part of nearly $7 million in funding to the five cities. A longtime Democratic operative, Michael Spitzer-Rubenstein, the Wisconsin state lead for the National Vote at Home Institute, the Center for Tech and Civic Life’s partner organization, was embedded in Green Bay’s elections.

Teske grew so frustrated that she took a leave of absence less than two weeks before the Nov. 4 presidential election. She resigned Dec. 31.

In her Aug. 26 email, Teske raises concerns about the grant “mentors”— Spitzer-Rubenstein and crew—and “the group” working with Green Bay Mayor Eric Genrich’s office on the locations of ballot drop boxes.

Teske warned that the decisions would “be a disaster for November,” but she appears to have been overruled.

“… [A]s you can see above, things have already been decided by the ‘group,’” Teske told Ellenbecker in the email.

The city clerk said she had been cut out of core elections decisions, including working with Brown County’s Coalition of Voting Organizations, a local group that “assists voters with registration and information about upcoming elections.”

Instead, the Green Bay mayor’s chief of staff, Celestine Jeffreys, appeared to be calling the shots on the City Clerk’s Office’s partnership with the Coalition of Voting Organizations, among other facets of election administration.

“She has excluded me from that whole portion of the planning … it’s so embarrassing,” Teske wrote in the email chain.

Teske again raised concerns about the “grant team” in the City Clerk’s Office. In an Oct. 20 email to her supervisor, Teske wrote that the mayor’s chief of staff was running the show by demanding that activist Spitzer-Rubenstein work in the clerk’s office. Jeffreys’ demand came as the mayor had ordered city buildings closed to the public in response to COVID-19.

Really … is Celestine [Jeffreys] running it now[?] … Please let me know. The Clerk’s Office said we didn’t want anyone from the grant team (or contracted through the grant team) to be in our office. If he [Spitzer-Rubenstein] wants to give us suggestions (observing) we are fine with that but he shouldn’t be working in the office. We need to social distance in the office I want the clerk’s staff to feel safe.

The city clerk also noted a lawsuit at the time challenging the Center for Tech and Civic Life’s grant funding to Green Bay and the four other Wisconsin cities.

“With the lawsuit I am not comfortable having him in the office. People are saying they are partisan group, we don’t think it looks good,” the clerk wrote.

I 100% agree that this person, can socially distance observe, but not in the clerk’s office. We can tactfully say until the lawsuit is done, we can’t risk any more press. He could possibly help direct traffic or sit at the end of the hall to observe. Maybe even help sort in-coming ballots with the temp help. Her statement—again—defies the city’s contention that Spitzer-Rubenstein wouldn’t have access to the ballots.

Teske told Ellenbecker that Jeffreys was “still controlling the show,” and Amaad Rivera-Wagner, the mayor’s community liaison, was making decisions that are within the domain of the clerk’s office.

“If I am to step aside there needs to be a press release because I will NOT take the blame for anything they do,” Teske wrote, two days before she took her leave of absence.