US Grant to Wuhan Lab on Bat-Based Coronaviruses Didn’t Get Review, NIH Says 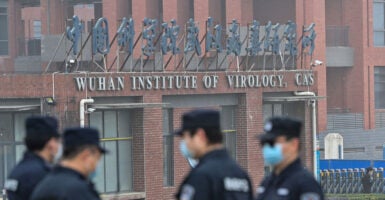 Security personnel stand guard Feb. 3 outside the Wuhan Institute of Virology in Wuhan, China, during a visit by a World Health Organization team investigating the origins of the coronavirus that causes COVID-19. (Photo: Hector Retamal/AFP/Getty Images)

An oversight board created to scrutinize research that would enhance highly dangerous pathogens did not review a National Institutes of Health grant that funded a lab in Wuhan, China, to genetically modify bat-based coronaviruses.

Experts say the NIH grant describes scientists as conducting gain-of-function research, a risky area of study that, in this case, made SARS-like viruses even more contagious.

Federal funding for gain-of-function research was suspended temporarily in 2014 due to widespread scientific concerns it risked leaking supercharged viruses into the human population.

Federal funding for gain-of-function research was resumed in late 2017 after the Potential Pandemic Pathogens Control and Oversight Framework was formed within the U.S. Department of Health and Human Services.

The review board is tasked with critically evaluating whether grants that involve enhancing dangerous pathogens, such as coronaviruses, are worth the risks and that proper safeguards are in place.

But the NIH subagency that awarded the grant to the nonprofit group EcoHealth Alliance to study Chinese bat coronaviruses opted against forwarding it to a Potential Pandemic Pathogens Control and Oversight review committee, an NIH spokesperson told The Daily Caller News Foundation, meaning the research received federal funding without an independent review by the HHS board.

“This is a systemic problem,” Rutgers University professor of chemical biology Richard H. Ebright told The Daily Caller News Foundation, referring to the loophole in the review framework.

Ebright said the offices of the director of the National Institute of Allergy and Infectious Diseases—the subagency that funded EcoHealth—and the NIH have “systematically thwarted—indeed systematically nullified—the Potential Pandemic Pathogens Control and Oversight Framework by declining to flag and forward proposals for review.”

An NIH spokesperson said its subagency did not flag the EcoHealth grant for independent review by the HHS review committee.

“After careful review of the grant, NIAID [National Institute of Allergy and Infectious Diseases] determined research in the grant was not gain-of-function research because it did not involve the enhancement of the pathogenicity or transmissibility of the viruses studied,” the spokesperson told The Daily Caller News Foundation.

“We would not submit research proposals that did not meet the definition, because otherwise we would need to submit everything,” the spokesperson said.

How Federal Oversight Is Bypassed

The Wuhan Institute of Virology is at the center of widespread speculation that COVID-19 could have accidentally leaked from a lab into the human population. EcoHealth’s grant to study bat-based coronaviruses in China included the transfer of $600,000 to the institute.

The Wuhan Institute of Virology is a biosafety level 4 laboratory, the highest level biocontainment certification, but U.S. Embassy officials issued two diplomatic cables warning about inadequate safety at the lab after a visit in 2018. One of the cables warned that the lab’s work on bat-based coronaviruses represented the risk of a new SARS-like pandemic, according to The Washington Post.

The U.S. government paused funding of gain-of-function research in 2014 after lab workers were exposed accidentally to anthrax by the Centers for Disease Control and Prevention, according to The New York Times.

The incident came on the heels of widespread scientific outcry in 2011 when it was revealed that laboratories in Wisconsin and the Netherlands were intentionally modifying the H5N1 bird flu virus so it could more effectively jump between ferrets.

Federally funded gain-of-function research resumed in 2017 after new oversight procedures were implemented. The review framework split oversight responsibilities between two groups—the funding agency (the National Institute of Allergy and Infectious Diseases in the case of the EcoHealth grant) and the Potential Pandemic Pathogens Control and Oversight review committee, an interdisciplinary group convened by HHS.

The review committee is responsible for recommending whether a research grant involving gain-of-function needs to include any additional risk mitigation measures, an HHS spokesperson told The Daily Caller News Foundation. But the committee is kept in the dark on any grant until the funding agency flags one for its review.

The so-called P3CO Framework doesn’t require the HHS review committee to take a second look at the National Institute of Allergy and Infectious Diseases’ determination following its review that the EcoHealth grant did not involve gain-of-function research.

The NIH spokesperson said it would be “misleading and inaccurate” to suggest that the National Institute of Allergy and Infectious Diseases was required to notify the HHS review committee of its determination.

An HHS spokesperson confirmed that the department’s P3CO Review Committee reviews only research grants that are flagged for additional review by funding agencies such as the National Institute of Allergy and Infectious Diseases. The spokesperson did not answer when asked if the review committee had knowledge of the EcoHealth grant.

Ecohealth has a history of manipulating bat-based coronaviruses. The group’s president, Peter Daszak, said as much during a podcast interview filmed in Singapore just weeks before the first reported cases of COVID-19 in Wuhan in December 2019.

“You can manipulate them in the lab pretty easily,” Daszak said. “Spike protein drives a lot of what happens with the coronavirus. Zoonotic risk. So you can get the sequence, you can build the protein—and we work with Ralph Baric at [the University of North Carolina] to do this—and insert the backbone of another virus and do some work in the lab.”

Rutgers’ Ebright told The Daily Caller News Foundation that the National Institute of Allergy and Infectious Diseases was wrong to determine that the EcoHealth grant did not involve enhancing the transmissibility of Chinese bat-based coronaviruses.

He said the project’s abstract for the 2019 fiscal year, which referenced “in vitro and in vivo infection experiments” on coronaviruses, “unequivocally required risk-benefit review under the HHS P3CO Framework.”

“It is hard to overemphasize that the central logic of this grant was to test the pandemic potential of SARS-related bat coronaviruses by making ones with pandemic potential, either through genetic engineering or passaging, or both,” Drs. Jonathan Latham and Allison Wilson wrote in June.

The NIH terminated the EcoHealth grant in April 2020. The NIH deputy director for extramural research, Michael Lauer, told the group in a letter that the agency “does not believe that the current project outcomes align with the program goals and agency priorities.”

Fauci said during a hearing before the House Energy and Commerce Committee in June that the EcoHealth grant was canceled “because the NIH was told to cancel it.”

“I don’t know the reason, but we were told to cancel it,” Fauci said.

Fauci told Politico following the hearing that the Trump White House ordered the NIH to cancel the grant.

The only known member of the HHS P3CO Review Committee is its chairman, Chris Hassell, the senior science adviser for the HHS Office of the Assistant Secretary for Preparedness and Response. Hassell disclosed his involvement in a January 2020 talk before the National Science Advisory Board for Biosecurity.

Hassell said during the talk that the current definition for a potential pandemic pathogen is “very narrow … which has resulted in only getting a few influenza-related proposals” for the P3CO committee’s review.

“I’ll just probably be more frank than maybe appropriate—I think that’s too narrow,” said Hassell, who then suggested that the government could be funding gain-of-function research that his committee hasn’t vetted.

“I think that could be revisited, and again there could be some definition issues,” Hassell said.

When gain-of-function funding was paused in 2014, 21 research projects were halted. But the NIH created exceptions for 10 of those, according to The New York Times.

After the funding continued in 2017, only two projects have been approved under the P3CO Framework. Both projects deal with the influenza virus, according to the NIH.

It’s unclear how many research grants have been reviewed under the framework. An NIH spokesperson said the agency doesn’t comment or discuss unfunded grant applications.

It’s also unclear who else serves on the HHS review committee. Hassell said in January 2020 that the committee is comprised only of federal employees, but said it could be detrimental to their work to release their names.

“As much as it would be good to publicize the individual names, which has been suggested, if that chills anyone being willing to serve on that committee, that would be detrimental,” Hassell said.

An HHS spokesperson said Hassell was unavailable for comment.

Eleanor Bartow contributed to this report.