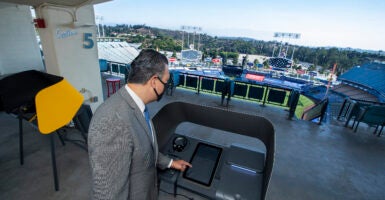 The federal agency that oversees such issues seems uninterested in investigating why millions in taxpayer money went to a California consulting firm that is a favorite of national Democrats. Pictured: Alex Padilla, then California's secretary of state and now a U.S. senator, checks out the view Sept. 24 from the voting center atop Dodger Stadium in Los Angeles. (Photo: Mel Melcon/Los Angeles Times/Getty Images)

House Republicans say they still want to know why $35 million in taxpayer dollars went to a Democrat-aligned consulting firm to boost voting last year in California—and whether it was even legal.

The federal agency that oversees related issues seems uninterested in investigating why federal money sent to California was used in part to pay for election safety measures in a $35 million contract with a political consulting firm that touted itself as part of “Team Biden.”

At least $12 million of the total came from federal taxpayers, while the remainder was from California taxpayers.

Using federal funds for a get-out-the-vote operation or to help one political party over another would violate federal law, Republican lawmakers say.

California’s secretary of state at the time was Alex Padilla, a Democrat who recently was appointed to replace Vice President Kamala Harris as the state’s junior U.S. senator.

“The $35 million was abused,” Rep. James Comer, R-Ky., told The Daily Signal. “It was paid to a partisan firm for get-out-the-vote efforts.”

The Sacramento Bee first reported that the California Secretary of State’s Office, under Padilla, awarded the grant for a program called Vote Safe California to the partisan consulting firm SKDK in August.

“As a public affairs firm, a great deal of our work (including this Vote Safe campaign) is nonpartisan,” Heather Wilson, managing director and head of the SKDK’s California office, told the Bee, the major newspaper in the state capital.

Dunn, a former communications aide to President Barack Obama, went to work for the Biden administration earlier this year.

SKDK was a transparently pro-Biden outfit during the 2020 presidential campaign.

Comer, ranking member of the House Oversight and Reform Committee, said California should give back the $35 million to the federal government.

The California Secretary of State’s Office, Padilla, and SKDK have not addressed the issue.

Now members of Congress are calling for the U.S. Election Assistance Commission’s inspector general, Patricia Layfield, to resign if she doesn’t investigate the matter.

“I don’t call for people to resign very often,” Comer said. “We have called for her to resign if she does not open a formal investigation.”

The Daily Signal sought comment from SKDK by phone and email both last week and this week, but a spokesperson had not responded by publication time.

Neither Padilla’s U.S. Senate office nor the California Secretary of State’s Office replied to requests for comment last week and this week from The Daily Signal.

Paula Valle, a spokeswoman for the state office, told the Bee in August that SKDK personnel working on the Vote Safe California project were nonpartisan and didn’t have ties to specific politicians.

Valle also said the election-related contract went through an expedited approval process at a time when the consulting firm was affiliated with five Democratic congressional candidates in California.

The California Legislature established Vote Safe California to require the secretary of state to “conduct a statewide voter education and outreach campaign regarding new procedures in place for the Nov. 3, 2020, statewide general election.”

In September, Republicans began investigating why the $35 million in federal money was paid to SKDK to produce commercials encouraging voter participation in the November election.

The expedited contract went through without a competitive bid process, said House Republicans, who also want to know whether SKDK had access to sensitive voter information.

Most concerning, Comer and two other House Republicans wrote Sept. 16 to Padilla as California secretary of state, were news reports that Russia had hacked into the consulting firm, which could compromise voter information. They wrote:

Awarding taxpayer money to a partisan firm with the potential to influence an election after the contractor has publicly advertised its work on behalf of a political candidate in that same election is a conflict of interest. This contract will undoubtedly provide a partisan firm the opportunity to use taxpayer money to influence the federal election.

Additionally, there are serious questions about how the contract was awarded, whether the firm will have access to sensitive voter information, and if any of the firm’s employees affiliated with ‘Team Biden’ will be involved with the project.

At the time of their letter to Padilla, the three lawmakers didn’t know how much federal money was involved and how much state money. The following month, upon confirming federal taxpayers helped pay for the program, they asked the Election Assistance Commission’s inspector general to investigate whether California’s grant to a partisan firm violated federal law.

The CARES Act, passed by Congress last March as the first in a string of COVID-19 “relief” bills, provided $400 million in Help America Vote Act grants for states as they prepared for the added cost of elections during the pandemic.

Such federal grants aren’t supposed to target specific voters for turnout purposes. Of the $35 million, only $12 million appears to be from federal funds, the three House Republicans wrote.

“We are writing to request an investigation of a highly questionable $35 million contract for voter contact that the California Secretary of State’s Office awarded on an ‘expedited basis’ to SKD Knickerbocker (SKDK), presidential candidate Joe Biden’s main election campaign advisory firm,” their October letter to Layfield, the inspector general, began.

“Specifically, the first page of the document, which appears to be the contract, references HAVA [Help America Vote Act] funding and the second page shows that $12 million in federal dollars will fund the project.”

According to the U.S. Election Assistance Commission (EAC), HAVA grants cannot be used to get out the vote (GOTV) or to encourage voting. Further, the CARES Act is very specific about the use of these funds, which must be used to ‘prevent, prepare for, and respond to coronavirus, domestically or internationally, for the 2020 Federal election cycle.’

Moreover, using HAVA funds for GOTV [get-out-the-vote efforts] directly contradicts the letter Secretary Padilla sent to the EAC on April 14, 2020, which described how the California Secretary of State would use CARES Act HAVA funds.

The California State Controller’s Office said in December that the Secretary of State’s Office wasn’t authorized to pay the invoices from SKDK, the Bee reported. Padilla’s office disputed this.

The Daily Signal asked the controller’s office Wednesday for an update on the matter, but no one had responded as of publication of this report.

The three House Republicans pressed the issue again with Layfield in December, after news reports that California Gov. Gavin Newsom, a Democrat, might appoint Padilla to Harris’ Senate seat after she was elected vice president in the November election.

Also in December, Rep. Jim Jordan, R-Ohio, ranking member of the House Judiciary Committee, joined Comer, Davis, and Hice in signing a letter to Padilla calling for California to return the money the Republicans considered to be inappropriately spent with SKDK, formerly SKDKnickerbocker.

In February, Comer, Davis, and Hice called for Layfield to investigate the grant to California or resign as the Election Assistance Commission’s inspector general:

You have so far refused to investigate or even publicly acknowledge the issues surrounding the SKDKnickerbocker contract. We are again providing you with new information about the origins of the contract that should be investigated immediately. If you are no longer interested in carrying out your duties to safeguard taxpayer money, you should resign your position.

Layfield is the Election Assistance Commission’s third inspector general. The commission, as an independent agency, appointed her to the post in February 2016.

Layfield’s office did not respond to inquiries from The Daily Signal either last week or this week as of publication time.

On March 18, the three House Republicans asked the Election Assistance Commission to provide information on policies and procedures regarding the total of $825 million in federal grants paid to state and local governments as election assistance.

This information would include the $400 million from the CARES Act. The lawmakers cited the $35 million California contract in the letter, but indicated they could delve further into election grants.

The Election Assistance Commission did not respond to inquiries from The Daily Signal.