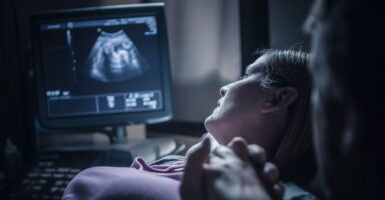 Pregnant women shouldn’t have to endure coercive, bullying behavior from doctors—especially as they try to navigate a tough pregnancy or a very grave prenatal diagnosis. Unfortunately, a growing number of studies show that this is more common than most people realize. (Photo: John Fedele/Getty Images)

Nora Sullivan is a senior development writer at the The Heritage Foundation and an associate scholar at the Charlotte Lozier Institute. She holds a master’s degree in public affairs from University College Dublin.

Every day in America, pregnant women sit in their doctors’ offices, waiting for scan results. These mothers—no matter their age, race, or economic backgrounds—all hope to hear the same news: that their baby is healthy and growing right on track.

Hearing the all-clear, these moms can rejoice and continue with their medical appointments. However, for the women who receive less-clear news—or an outright distressing prenatal diagnosis—an already nerve-racking doctor’s visit can take on a nightmarish quality.

Not only must the mother face the possibility that her baby is in peril, but all too often she is subject to bullying, as the doctor to whom she has entrusted her body and her child attempts to push her toward abortion.

Doctors who pressure women to abort following the prenatal diagnosis are a problem rarely discussed. It was hammered home for me recently when a close friend, who is five months pregnant with a little boy, received a scan that raised some concerns. While she was still on the examination table, partially clothed, abdomen still covered in ultrasound jelly, her doctor brusquely began pressuring her to abort.

After being firmly told that abortion was not an option for her, the doctor continued to push it. We later marveled that, in a post-#MeToo era, a medical professional who primarily serves women could refuse to believe that no means no.

The doctor proceeded to explain it could potentially cost upwards of a million dollars to keep a sick or premature baby in the neonatal intensive care unit for three months. When this argument failed to sway her, he dismissively asked if she were religious.

I wish I could say that this repugnant and deeply misogynistic behavior is an aberration among doctors treating expectant mothers, but sadly, it is not. Since this incident, many friends and family have reached out with similar stories about how they (or a sister or a colleague) were pressured to abort when confronted with a challenging pregnancy.

The data mirrors the disturbing anecdotes: A study in the medical journal Prenatal Testing and Disability Rights found that a quarter of doctors admitted trying to influence a mother’s decision about whether or not to continue with her pregnancy when faced with a tough diagnosis. Most encouraged mothers to terminate.

Additionally, data from the medical journal Critical Care Medicine shows that what doctors tell parents about their child’s prognosis is often influenced by their own attitude toward neurological impairment.

This poor treatment can be a source of lasting trauma for women.

A recent study, highlighted in Scientific American, surveyed more than 300 mothers who had received a diagnosis of Down syndrome for their child.

The researchers asked the mothers about their memories of their child’s diagnosis, including details about the medical staff, the date, and even the weather at the time. While some mothers described positive care, many were left haunted, even years later, by their experiences at the hands of medical staff.

More often, however, the mothers reported negative experiences with medical staff, including a lack of compassion, pressure to terminate their pregnancy, and pessimistic expectations about outcomes for their child and family. Many received limited or no additional resources or support systems.

For those individuals, memories of the diagnosis continued to be associated with negative emotions, and the time that had elapsed had not helped lessen the impact. Mothers who had not received positive feedback could recall their diagnosis experience in specific, often haunting detail, even after 20 years.

Far too often, women facing challenging pregnancies are being failed by the very people best positioned to care for them and their babies. Instead of receiving support and information, these vulnerable mothers face scorn and pressure to choose abortion. If they object, they are shamed or their judgment is questioned.

Where are the women’s rights advocates? Sadly, professional feminists are so determined to justify late-term abortion that they will ignore this unconscionable treatment of women and try to block out all life-affirming options for their babies.

Pregnant women shouldn’t have to endure coercive, bullying behavior from doctors—especially as they try to navigate a tough pregnancy or a very grave prenatal diagnosis.

From the moment a serious issue is detected in the pregnancy, mothers should be offered compassion, support, and every option available to save their baby. If abortion is our first and best choice, then we have failed them miserably.

It’s time we did better.