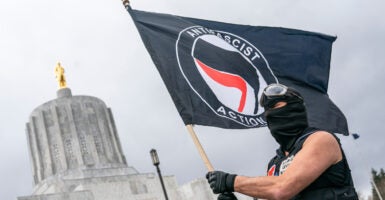 As Antifa’s destructive activism returns to the Pacific Northwest, residents of the region worry that the violence will worsen and even become a permanent fixture. Pictured: An "anti-fascist" flag on view Sunday at the Oregon State Capitol in Salem. (Photo: Nathan Howard/Getty Images) 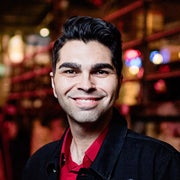 SEATTLE—After weeks of relative silence, Antifa’s destructive activism came roaring back to the Pacific Northwest. And as the trial of a former police officer in the death of a black man is underway 1,650 miles away, this region worries that the violence not only will worsen but threaten to become a permanent fixture.

Violence erupted in both Seattle and Portland, Oregon, in mid-March as jury selection began for the trial of Derek Chauvin in the May 25 death of George Floyd while in the custody of Minneapolis police.

Yet this violence wasn’t exclusively connected to anger related to the trial; it was merely a symbolic restart to the extremists’ activism. Their violence uses social movements for cover. Their intent, however, is to dismantle our institutions and rebuild through a lens of radical social justice.

On the evening of March 8, workers finally took down the fencing, concrete barriers, and wooden boards protecting windows at the federal courthouse In Portland. Officials had taken the protective measures after the riots in the city last summer became relentless.

The violence in Portland was part of civil unrest across the nation in the wake of Floyd’s death in Minneapolis. The barriers did nothing to prevent the riots and insurrection attempts from taking place, but helped prevent rioters from burning down the U.S. courthouse.

But just three days after the courthouse began to look normal again, the radical extremist group Antifa unleashed a new torrent of violence. And again the day after.

The participants broke windows, started fires, and attacked federal law enforcement. By March 11, the boards went back up over windows when law enforcement got word of an imminent protest. By March 14, the fencing and concrete barriers returned to the courthouse.

A Portland rally in support of “Indigenous lives” was rather instructive. Some protesters held signs with messages such as “Protect the Land, End America”—a reference to protecting Anishinaabe treaty territories by stopping a proposed oil pipeline connecting Alberta, Canada, and Superior, Wisconsin.

Their ire extended to an attack on a local Chase Bank, a financial backer of the pipeline, when a mob grabbed the lone security guard a little after 1 p.m. He was doing his best to keep the property safe. He ended up pulling a gun to defend himself and the customers inside.

That night, a group of 60 radicals in “black bloc”—the uniform worn by Antifa thugs to make it harder to identify criminals who destroy property and attack police—took to the newly defenseless Mark O. Hatfield U.S. Courthouse.

They ripped down the plywood, using it to start fires to the building. Thankfully, law enforcement put out the flames before they spread. Police responded with nonlethal munitions, arresting only one person—a testament to how hamstrung law enforcement has been in engaging with rioters.

The next night, about 100 Antifa, other agitators, and like-minded online streamers assembled in Portland’s Pearl District. After vandalizing property, Portland police used a crowd control maneuver called “kettling,” where officers contain a crowd in a small area, then allow individuals to leave one by one.

The unexpected move helped keep the violence and destruction at bay.

‘Seattle Don’t Have the Resources’

Antifa in Seattle didn’t want to be left out of the fun. They, too, took to the streets.

On the anniversary of the death of Breonna Taylor, killed in a botched police raid in Louisville, Kentucky, black bloc radicals vandalized property in downtown Seattle and assaulted police.

Police made 13 arrests related to violence and vandalism late March 13 and early March 14, which upset a local leader who was caught on video scolding the Antifa group for breaking the rules of engagement. She knows it’s difficult to get arrested, the woman said, so why did 13 of the lawbreakers end up going to jail?

“Seattle don’t have the resources,” the woman told the Antifa extremists. “We can only get arrested for getting a [expletive] felony. Do your research on how our [expletive] cops handle things.”

She’s right. Seattle doesn’t have the resources. And she knows the hooligans don’t normally get arrested or charged.

The Seattle Police Department saw a mass exodus of nearly 200 police officers in 2020 after a relentless public campaign by anti-police activists and like-minded City Council members to demean, demoralize, assault, and defund police.

The trend of officer resignations and retirements continues in 2021, with the Seattle Police Department having its lowest number of patrol officers since the early 1990s.

What’s worse, under an unofficial order, Seattle’s remaining police officers aren’t allowed to engage with Antifa, police sources say, even though a tighter grip on the group’s “direct action” would lessen the likelihood of vandalism.

As is also the case in Portland, the Seattle city attorney and the King County prosecutor do not charge anyone with committing most crimes associated with violent protests. Consequently, Antifa members and other vandals largely have escaped legal consequences for the destruction they cause.

And it’s not just that there are few consequences to their lawlessness; they’re being rewarded. Antifa members rallied for the defunding of police, and they saw policy successes.

Portland city officials cut the police department’s budget by $15 million. The cut included gutting a team to reduce gun crimes. The result: a 27-year high in gun violence. Who could have seen that coming?

Likewise, the Seattle City Council cut 20% of the police department’s budget. In the process, it ran the department’s first black female police chief out of town. Seattle saw the homicide rate hit a 26-year high as a result.

Yet the Seattle City Council remained determined to cut at least $5.4 million more from the police budget, despite a total lack of results from its first cuts.

After a federal judge who oversees the police department’s federal consent decree issued a warning that public safety could suffer, however, the council backed down.

With these significant wins, combined with a lack of meaningful law enforcement in response to its crimes, Antifa has grown empowered to continue the domestic terrorism. The fear is that it’s about to get worse.

As prosecutors and the defense made opening arguments Monday in Chauvin’s trial in Minneapolis, many worried that Antifa and its allies would take advantage of the emotion of Black Lives Matter and other activists. Three other police officers who were at the scene with Chauvin face their own trials on lesser charges.

Already, I can write a likely script: The extremists will use the anger over the eventual verdicts for cover as they justify violence and destruction. I’m not a soothsayer. It’s what Antifa, among others, did last summer. They’re not actually believers in the Black Lives Matter movement, not really.

These radical regional groups are overwhelmingly white, middle-class communists, socialists, and anarchists. And they don’t hide what they stand for, though they position themselves as social justice warriors fighting for just causes.

And they view most, if not all, conservatives as fascists—a term they throw around so freely it becomes clear they do not know its definition.

In the name of Black Lives Matter, the extremists damaged if not destroyed Starbucks shops, bank branches, Amazon buildings, federal and local buildings, even local political headquarters. This does not serve black lives. It’s not meant to.

Ultimately, under the guise of being “anti-racist,” Antifa and its ilk see this country as founded in white supremacy. Our institutions, they argue, maintain an unjust system of oppression. Thus, the system must be dismantled and rebuilt.

Whatever the result of Chauvin’s trial, Antifa extremists will take to the streets and try to recreate the chaos of last year. They’ll almost assuredly be successful, and such mayhem will become a permanent fixture if no one pushes back. But will anyone?

Is there any reason to believe Antifa and its allies will get less support from like-minded (or cowardly) local politicians, who dare not condemn a violent, radical group they pretend doesn’t exist?

It seems unlikely that left-wing media outlets, from CNN and MSNBC to The New York Times and The Washington Post, will change their tune.

Most outlets outside of Fox News still refuse even to identify the extremists as Antifa, referring to the mob as “protesters” and the riots as “demonstrations.” This only emboldens Antifa and its allies.

At some point, political and legal inaction by elected officials means that cities such as Seattle and Portland will be lost to the violence. Complicit politicians have trained these radicals to feel comfortable engaging in their dangerous direct action.

And the extremists have a lot to show for it.