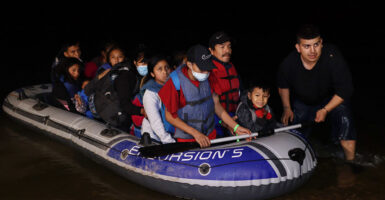 The Biden administration has conceded that illegal immigration is on pace to reach a 20-year high. Pictured: A group of migrants arrives in the U.S. after crossing the Rio Grande in a raft guided by Mexican smugglers on March 28 in Roma, Texas. The migrants turned themselves into the Border Patrol as they seek asylum in the U.S. (Photo: Joe Raedle/Getty Images)

The Department of Homeland Security said two weeks ago that illegal border crossings are on pace to reach their highest level in two decades.

Lora Ries, senior research fellow for homeland security at The Heritage Foundation, joins “The Daily Signal Podcast” to discuss those and other claims.

Lora Ries: Thanks for having me back on.

Del Guidice: Well, it’s great to have you with us. So, your immigration team at Heritage responded to a lot of the different claims made by the Biden administration about what’s happening with illegal immigration right now, and so, I want to go through this fact-check your team did.

First off, I wanted to ask, you looked at the claim that the border crisis happens every year. What did you find when you looked at this claim made by the Biden administration?

If you look at the numbers, it is certainly not a seasonal flow that we are seeing right now. For example, 69,000 illegal aliens were apprehended in November of 2020, but just in February of this year, over 100,000 have been apprehended. And that’s expected to go up to over 120,000 for March.

Then in contrast, the November to March numbers under President [Donald] Trump in … 2019 to 2020 actually decreased. And from March of 2020 to March of this year, Customs and Border Protection anticipates a 263% increase in illegal crossings.

Ries: Well, they absolutely did. In 2019, we did see a border crisis, and the Trump administration began two critical programs that were real game-changers.

One was the “Remain in Mexico” program, which allowed asylum-seekers to still apply for asylum, but they had to wait in Mexico while their proceedings took place.

And when would-be migrants realized that claiming a fear was no longer going to be their ticket to get into the U.S. to then disappear, they stopped coming. And the numbers quickly started to decline.

The other key aspect of that was the agreements that the Trump administration made with the governments of Mexico, Honduras, El Salvador, and Guatemala.

And for the first time, the Trump administration used the leverage that the U.S. has with respect to these countries and said, “If you want to continue to get foreign aid from us, we expect some cooperation in return, particularly with respect to immigration.”

And so, those countries agreed, and they enforced their own respective borders. They built up their own respect of asylum systems and they took nationals back who traverse through their countries, but didn’t seek asylum until they got to the U.S. So those numbers quickly decreased.

Del Guidice: There was another claim that was made that the Remain in Mexico policy was inhumane. So, Lora, can you first tell us about that policy and then whether or not it was actually inhumane?

Ries: The Trump administration negotiated with government of Mexico to house migrants on the Mexico side of the border who wanted to continue to pursue an asylum claim with the U.S., and Mexico offered housing as well as jobs.

Now, not only is that ridiculous, but the Biden administration is returning Mexican nationals back to Mexico. So, they’re not being honest about what they themselves are doing in the current crisis.

Del Guidice: You had a recent piece published for heritage.org, and it’s called “Biden Administration’s New ICE Guidance ‘Turns America Into a Sanctuary Country.'” Can you tell us, Lora, about the new guidelines for Immigration and Customs Enforcement that those agents are subject to now under the Biden administration?

Ries: Yeah. So, everything old is new again. Under the Obama administration, the Department of Homeland Security put out a ICE, or Immigration and Customs Enforcement, priorities memo and it narrowed the types of cases that ICE could arrest people, detain them, or remove them.

The memo that was issued in February of this year by this administration basically lists three priorities: terrorists, spies, and convicted aggravated felons.

That leaves out a large number of very serious criminals, if you think of driving under the influence or domestic abuse, child abuse, molestation, crimes like that, very serious crimes that would not be considered a priority for this administration.

Finally, the memo also lists anyone who illegally entered the U.S. after Nov. 1 of 2020, but I don’t give that one much credence because anyone can purchase a document to show that they’ve been in the U.S. by whatever date is necessary.

This restricts ICE’s caseload by about 90%, and it really does make the U.S. a sanctuary country. So, it tells future migrants, “Come into the U.S., and we are not going to deport you.”

Del Guidice: You had mentioned that these new guidelines really do restrict, or I guess take off, about 90% of ICE agents’ workload. Can you talk a little bit more about what they would usually be doing, and how this new so-called guidance really keeps them from doing their job?

Ries: There are several grounds in the Immigration and Nationality Act that make someone either inadmissible into the U.S. or removable from the U.S. when they’re here. Anything from, if they illegally cross the border without being inspected, if they entered with a visa and overstayed the terms of those visas, a number of crimes, etc.

So, many of those that are taken off the table for ICE agents to put someone into removal proceedings or to seek their removal.

And what is even more ridiculous about this memo, it says, “If an ICE agent wishes to pursue someone with a case that doesn’t fall into these three priorities,” that I mention, ” … they have to go first get prior approval from a supervisor, and they have to write a descriptive narrative justification each week to pursue such cases.”

So, this administration is clearly telling ICE agents, “Don’t do your job.”

Del Guidice: Lora, something else you had fact-checked was a claim made by President Biden, which really has blamed the Trump administration for the border crisis, and you said that this claim doesn’t have credibility. Why is that the case?

Ries: The most obvious evidence is that the Trump administration did not have a border crisis in 2020, because following the 2019 border crisis, the Trump administration had implemented those successful programs I had mentioned earlier—the Remain in Mexico program and the agreements with Central American countries—which drastically reduced the illegal encounters at the border. And in 2020, those numbers continued to fall.

Now, the career officials at Homeland Security had several meetings with the Biden transition team and warned the transition team that if they rescinded those programs or removed the operations, revoked those agreements, that they would quickly have a border crisis on their hands. And that’s exactly what happened and what we are now experiencing.

Del Guidice: Lora, you had also fact-checked some claims from Department of Homeland Security Secretary Alejandro Mayorkas. And a claim that he had made was that, “We’re expelling families, we’re expelling single adults, we have communicated and will continue to communicate to the children, do not come.” You had rated this claim as false. Why is that the case?

Ries: Well, he continues to state that if unaccompanied children come to the border, that we will let them all in, which is an extremely dangerous statement to make, because it just encourages traffickers and smugglers to use children and for parents to send their children unaccompanied north to the border.

This administration is returning some families back to Mexico, some single adults, particularly Mexican nationals. They are treating nationals from other countries, from noncontiguous countries, differently. They are allowing them into the U.S. and to remain here.

I have yet to have someone explain to me why they’re treating Mexican nationals differently than all other nationals. They should all be returned to either Mexico or their home country.

But with respect to the children in particular, the numbers are just shocking. Every day, it’s jumping by the thousands. It’s now over 18,000 in detention and it’s the left’s policies that have encouraged this, by giving benefits to unaccompanied alien children, and it just encourages more parents to send them north.

So, the officials in this administration really need to pause and step back and realize their policies are leading to more trafficking and not less.

Del Guidice: One lastly, Lora, another claim made by Department of Homeland [Security] Secretary Alejandro Mayorkas was that Border Patrol agents are focused on operations, on securing the border, on addressing the needs of vulnerable children. And you had rated this claim as misleading. Why is it misleading?

Ries: The agents are doing everything they can in terms of dealing with the large volumes of people who are crossing the border. The secretary has transferred resources from the northern border to the southern border, but because of the large volumes, many agents are pulled off the line and having to address children, whether that’s the feeding and caring of them, changing diapers.

And these agents, their hearts go out to these children, but it really affects the ability to secure the border, which is one of the reasons why we indeed have an open border right now and nationals from countries all over the world are exploiting it.

Del Guidice: Well, Lora, thank you so much for joining us on “The Daily Signal Podcast.” It’s always great having you with us.

Ries: Thanks for having me.