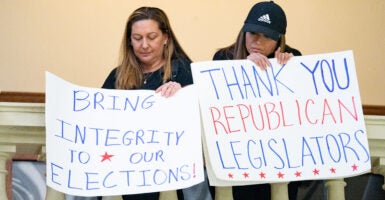 Here’s a look at the key myths vs. facts about Georgia’s election reforms, which Gov. Brian Kemp, a Republican, signed into law. Pictured: Demonstrators inside the Georgia State Capitol in Atlanta show their support March 8 for the legislation. (Photo: Megan Varner/Getty Images)

President Joe Biden and other Democrats, without offering evidence, equate Georgia’s new election law with the Jim Crow era, while many media outlets obligingly repeat Democratic talking points about it.

A headline over a March 25 news report in The New York Times, not an opinion piece, referred to the legislation as a “major law to limit voting.”

Among the most vocal opponents is Stacey Abrams, Georgia Democrats’ 2018 candidate for governor, who now heads a group called Fair Fight Action, which describes itself as a voting rights organization.

“From passage of the #SB202 voter suppression bill targeted at Black and brown voters to the arrest of a Black legislator who was advocating for the voting rights of her constituents, today was a reminder of Georgia’s dark past,” Abrams wrote last week in a tweet. “We must fight for the future of our democracy #gapol.”

The Washington Post stands almost alone in the ocean of mainstream media outlets, noting in a fact-check analysis that Biden earned “four Pinocchios” for making misleading comments about Georgia’s new election law both during his first press conference and in an official presidential statement.

Here’s a look at the key myths vs. facts about Georgia’s election legislation, which Gov. Brian Kemp, a Republican, signed into law last Thursday.

In his written statement, Biden said of the new law: “It adds rigid restrictions on casting absentee ballots that will effectively deny the right to vote to countless voters.”

The term “rigid restrictions” is a matter for debate, so a ruling of true or false is difficult here.

The law does require voter ID for individuals who are casting absentee ballots, which previously was not the case. A voter would need to provide a driver’s license number or another state identification number on the absentee ballot form.

The deadline is still before Election Day. But the new law allows voters to return applications for absentee ballots online, through the Secretary of State’s Office.

The earliest that Georgia voters may request an application for an absentee ballot will be 77 days before Election Day, down from 180 days, according to Georgia Public Broadcasting.

Kemp said that 96% of Georgia voters already have suitable voter ID, and alternative identification would be provided at no charge to those who need it.

“In order to verify that the absentee ballot was voted by the elector who requested the ballot, the elector shall print the number of his or her Georgia driver’s license number or identification card,” the law states, referring to a voter as “elector” and adding: “The elector shall also print his or her date of birth in the space provided in the outer oath envelope.”

If the elector does not have a Georgia driver’s license, identification card issued pursuant to Article 5 of Chapter 5 of Title 40, or a Social Security number, the elector shall so affirm in the space provided on the outer oath envelope and place a copy of one of the forms of identification set forth in subsection (c) of Code Section 21-2-417 in the outer envelope.

For its part, Fair Fight Action, the group run by Abrams, asserts: “Over 200,000 Georgians lack the appropriate ID under SB 202.”

Georgia’s law prohibits campaign workers from distributing food or drink, or anything else of value, to waiting voters, and from setting up a table within 150 feet of the building or 25 feet of a voter.

The most prominent talking point to emerge from Biden and other Democrats has been regarding water bottles.

“It makes it a crime to provide water to voters while they wait in line—lines Republican officials themselves have created by reducing the number of polling sites across the state, disproportionately in Black neighborhoods,” Biden said of the new law in his formal statement.

This is false, because the law specifically allows official poll workers, as opposed to campaign workers, to provide water to voters.

This Code section shall not be construed to prohibit a poll officer from distributing materials, as required by law, which are necessary for the purpose of instructing electors or from distributing materials prepared by the Secretary of State which are designed solely for the purpose of encouraging voter participation in the election being conducted or from making available self-service water from an unattended receptacle to an elector waiting in line to vote.

A practice known as the “line warming loophole,” in which campaign operatives provide giveaways to voters while they stand in line, is not a new controversy.

“The right to vote is sacred and fundamental to our democracy, and I am committed to upholding that right for all Georgians,” Raffensperger said in a formal statement. “Political organizations looking to game the system should be forewarned that we will not tolerate efforts to electioneer near polling sites in violation of the law.”

As for Biden’s charge that Republicans are creating long lines to vote, the new law provides “additional voting equipment or poll workers to precincts containing more than 2,000 electors.”

Kemp said this change would lead to shorter lines.

In his written statement Friday, Biden said: “Among the outrageous parts of this new state law, it ends voting hours early so working people can’t cast their vote after their shift is over.”

This assertion about voting hours is false.

The new Georgia law does nothing to change Election Day voting hours from 7 a.m to 7 p.m., although it expands weekend voting before Election Day.

The law adds early voting on two Saturdays and one Sunday that previously were not available to Georgians.

Georgia Public Broadcasting, the state affiliate of the left-leaning Public Broadcasting Service (which includes National Public Radio), did an explanatory piece that said: “One of the biggest changes in the bill would expand early voting access for most counties, adding an additional mandatory Saturday and formally codifying Sunday voting hours as optional.”

The law itself states:

Requiring two Saturday voting days and two optional Sunday voting days will dramatically increase the total voting hours for voters across the State of Georgia, and all electors in Georgia will have access to multiple opportunities to vote in person on the weekend for the first time.

Previously, some rural counties in Georgia didn’t provide for early voting for eight hours on a work day, the Post reported.

The legislation signed into law by Kemp does limit the time for runoff campaigns from nine weeks after Election Day to four weeks. But it says early voting in these runoff elections should begin “as soon as possible prior to a runoff from any other general primary.”

The New York Times, in a March 30 story, referred to the legislation as a “GOP-backed bill that prohibits the use of drop boxes.”

The law actually codifies use of drop boxes. Election officials provided drop boxes for ballots in the presidential election in Georgia based on Kemp’s emergency order to address voting concerns during the COVID-19 pandemic.

But for SB 202, drop boxes would not have to be used in any future Georgia elections.

That said, fewer drop boxes will be available in future elections—presumably operating in the absence of a pandemic—than in the 2020 election.

Each county in Georgia must provide at least one drop box. But boxes will have to be located near early-voting sites and be accessible for dropping off absentee ballots when these polling locations are open.

Upon the Georgia Legislature’s passage of the bill, Abrams, the losing 2018 gubernatorial candidate, said in a public statement:

Republican state leaders willfully undermine democracy by giving themselves authority to overturn results they do not like. Now, more than ever, Americans must demand federal action to protect voting rights as we continue to fight against these blatantly unconstitutional efforts that are nothing less than Jim Crow 2.0.

During his press conference Thursday, Biden appeared to make false assertions about the Georgia legislation that were repeated in his official statement.

“Deciding in some states that you cannot bring water to people standing in line, waiting to vote; deciding that you’re going to end voting at 5 o’clock when working people are just getting off work; deciding that there will be no absentee ballots under the most rigid circumstances,” Biden said at one point to reporters.

The president added: “This makes Jim Crow look like Jim Eagle. I mean, this is gigantic what they’re trying to do, and it cannot be sustained.”

“It’s Jim Crow in the 21st Century—and it must end,” Biden said in the tweet.

Sen. Elizabeth Warren, D-Mass., tweeted of Kemp: “The Republican who is sitting in Stacey Abrams’ chair just signed a despicable voter suppression bill into law to take Georgia back to Jim Crow.”

Tweets from some reporters and media outlets expressed the same line.

Putting aside what is or isn’t acceptable political hyperbole, Jim Crow has a literal historical legacy.

With regard to voting, these laws included requiring poll tests for black voters before they could cast a ballot. These overtly racist laws also restricted employment and educational opportunities for black Americans.

Schools, parks, recreation facilities, and other public buildings routinely were segregated throughout the South, as were public restrooms and water fountains. The Jim Crow era included terrorist activity by the Ku Klux Klan, which committed violent and deadly acts against blacks such as lynchings, often with impunity.

“It’s an outrageous historical lie and insulting to those who actually suffered under Jim Crow election laws in the old South, to compare providing ID on absentee ballots with Jim Crow,” Hans von Spakovsky, manager of the Election Law Reform Initiative at The Heritage Foundation, told The Daily Signal.

This is a dubious political characterization.

The Associated Press reported: “One of the biggest changes [in the law] gives the GOP-controlled legislature more control over election administration. That has raised alarms about potential greater partisan influence.”

Meanwhile, Georgia’s secretary of state will have a diminished role. This is the basis for the claim that partisan politics could play a role.

“The secretary of state will no longer chair the State Election Board, becoming instead a non-voting ex-officio member,” Georgia Public Broadcasting explained. “The new chair would be nonpartisan but appointed by a majority of the state House and Senate.”

“The chair would not be allowed to have been a candidate, participate in a political party organization or campaign or [have] made campaign contributions for two years prior to being appointed.”