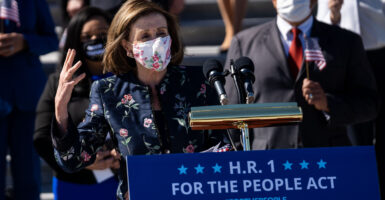 House Speaker Nancy Pelosi, D-Calif., speaks at a March 3 press conference in support of HR 1, the For the People Act, at the Capitol. Among its innumerable changes to election laws, HR 1 would mandate state redistricting commissions and micromanage who could serve on them. (Photo: Kent Nishimura/Los Angeles Times/Getty Images)

HR 1, the so-called For the People Act, is a dangerous and radical bill.

It threatens the security, fairness, and integrity of our elections and restricts the First Amendment rights of Americans to freely engage in political speech and activity.

It would force state legislatures to hand over the redistricting process to unaccountable bureaucrats and institutionalizes racial and gender quotas.

It would also implement what amounts to a test to participate in redistricting that violates the associational and religious rights of the public.

People often complain about gerrymandering by state legislatures when they draw the political lines after every decennial census. But legislators at least are accountable to voters, who can vote them out of office if the voters are not satisfied with the job the legislators do.

That’s certainly not true with the appointed members of government commissions.

Yet that is exactly what HR 1 creates. It would abrogate the authority of state legislators to draw the boundary lines of congressional districts and transfer it to so-called independent redistricting commissions, which in states such as Arizona and California have not proven to be very “independent.”

The very detailed requirements for eligibility to serve on these commissions, hidden deep inside the 800-page bill, are shocking and offensive.

Are you an American who has recently changed his or her mind on which political party best supports your values, views, and principles?  If you’ve done so within the past three years, you can’t serve on a commission because you are only eligible if you’ve “been continuously registered to vote with the same political party” for the three years prior to your appointment.

If you want to be considered for appointment, you have to disclose your “household income for the most recent taxable year.” Apparently, your income is somehow important to whether you are qualified to determine the political boundaries of congressional districts.

But it gets worse.

You can’t even be considered for the commission unless you disclose your “involvement with, or financial support of, professional, social, political, religious, or community organizations or causes.”

In other words, not only do you have disclose which church, mosque, or synagogue you attend, but also your support for nonprofit organizations, such as the NAACP or the NRA, NARAL or Citizens for Life.

That’s exactly the kind of information the U.S. Supreme Court told Alabama in 1958 that it could not require be publicly disclosed because it violated the constitutional rights of citizens to associate for the advancement of their beliefs and ideas.

In today’s “woke” cancel culture, forcing such disclosure would likely subject anyone who wants to be in the “selection pool” to harassment and intimidation—exactly what the NAACP feared would happen when it went to court in 1958.

Furthermore, religious tests are strictly outlawed by Article VI of the U.S. Constitution for federal offices, and the Supreme Court extended that prohibition to all state offices in 1961 in Torcaso v. Watkins through the First Amendment.

Forcing individuals to disclose their religious affiliation potentially puts them in the position of not being chosen due to their religious beliefs, which is essentially a prohibited religious test.

What possible explanation is there for the sponsors of HR 1 to put this into their bill other than to allow that to happen?

But HR 1 is even more insidious. The Civil Rights Act of 1964 bans discrimination on the basis of race, color, religion, sex, or national origin. So why does HR 1 require anyone who wants to be in the “selection pool” to disclose their “race, ethnicity, [and] gender”?

It’s because HR 1 sets up what amount to discriminatory quotas for membership, that’s why.

Whether a state follows this diktat would be reported to Congress. HR 1 requires the comptroller general of the United States to “submit to Congress a report on the extent to which the membership of independent redistricting commissions … meet the diversity requirements” of this statute.

There are many other objectionable requirements in this part of HR 1 on redistricting commissions.

So, where is the outrage over your job and education history being a consideration with respect to whether you, as a citizen, are allowed to be selected to draw the lines of the congressional districts you are qualified to vote in or run in as a candidate?

Moreover, this provision discriminates against spouses and family members of those who are active in politics. You cannot be on a commission if your spouse or other “immediate” family member holds public office—even if that office has nothing whatsoever to do with Congress or congressional districts.

In other words, if your wife is on the local town council, you cannot serve on a commission that draws the boundaries of congressional districts.

If you contributed more than $1,000 in total to any political candidates for any “public office or to any political action committee” in the 10 years prior to appointment, you are also banned from serving on a commission.

Again, that means that if you made a donation to someone running for dog catcher, the local school board, or your town council, and that total combined was more than $1,000, you can’t draw the lines for congressional districts.

Who should be outraged by HR 1 and this redistricting scheme? Answer: every American, and especially every “father, stepfather, mother, stepmother, son, stepson, daughter, stepdaughter, brother, stepbrother, sister, stepsister, husband, wife, father-in-law, or mother-in-law” excluded from the redistricting process because of their family’s political involvement or their race, ethnicity, gender, income, employment, and education.

In other words, everyone.