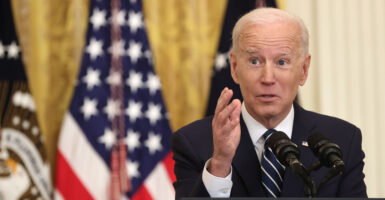 President Joe Biden answers questions Thursday at the first news conference of his presidency in the East Room of the White House. Biden, 78, took questions about the coronavirus pandemic, immigration, the Senate filibuster, and other topics. (Photo: Chip Somodevilla/ Getty Images)

President Joe Biden on Thursday spoke of going to the Senate “120 years ago,” claimed nothing has changed on the border regarding illegal immigration, and outlined more ambitious goals for COVID-19 vaccinations and the reopening of schools.

On Day 65 of his presidency, Biden held his first press conference, fielding questions from 10 reporters in a formal question-and-answer session that lasted just over an hour.

In some cases, reporters pressed Biden, particularly on issues pertaining to the immigration crisis at the border. Other reporters, however, seemed to echo Democratic talking points in accusing Republicans of pursuing “voter suppression,” while another characterized Biden as being “decent and moral.”

The following are seven highlights from the press conference.

Biden hinted that he was open to abolishing the Senate filibuster, but preferred to return to an old-fashioned filibuster that required a senator to hold the floor and talk at length.

“We should go back to a position with the filibuster that existed when I came to the United States Senate 120 years ago,” Biden said. It wasn’t clear whether that was intended as a self-deprecating joke about his long tenure in Washington, since he didn’t smile or laugh.

Biden then seemed to fumble for words and statistics.

“I had a card on it, so I was going to give you the statistics, but you probably know them,” Biden said. “That used to be that, uh, well, that between 1917 and 1971, the filibuster existed, there were a total of 58 motions to break a filibuster that whole time.”

“Last year alone, there were five times that many. So, it’s being abused in a gigantic way,” Biden said. “For example, it used to be, you had to stand there and talk and talk and talk until you collapsed.

Guess what? People got tired of talking and tired of collapsing. Filibusters broke down. We were able to break the filibuster, and get a quorum and vote.

Biden added that he essentially needs to get 50 votes for Vice President Kamala Harris to cast the tie-breaking vote in the 100-member Senate, or to get 51 votes without her.

He seemed to verbally stumble again when making that point.

“I have never been particularly poor at calculating how to get things done in the United States Senate,” Biden said. “So, the best way to get something done if you hold it near and dear to you that—uh, like to be able to, uh, anyway—we’re ready to get a lot done.”

He added, “If we have to, if there is complete lockdown and chaos as a consequence of the filibuster, then we’ll have to go beyond what I’m talking about.”

CNN’s Kaitlan Collins subsequently asked, “President Barack Obama said he believed the filibuster was a relic of the Jim Crow era. Do you agree?”

She followed up: “Why not abolish it if it’s a relic of the Jim Crow era?”

Biden said: “Successful electoral politics is the art of the possible. Let’s figure out how we can get this done and move in the direction of significantly changing the abuse of the filibuster rule first.

“It has been abused since it came into being by an extreme way in the last 20 years. Let’s deal with the abuse first.”

2) ‘Moral, Decent’ Biden: ‘Nothing Has Changed’ on Border

PBS reporter Yamiche Alcindor asked Biden, “The perception of you that got you elected as a moral, decent man is the reason that a lot of immigrants are coming to this country and trusting you with unaccompanied minors.

“How do you resolve that tension, and how are you choosing which families can stay and which can go?

Biden dismissed the notion that immigrants are crossing the border because he’s perceived by them as more welcoming than former President Donald Trump.

“I guess I should be flattered people are coming because I’m the nice guy. That’s the reason why it’s happening is that I’m a decent man, or however it’s phrased,” Biden said. “That’s why they’re coming, because Biden is a good guy. The truth of the matter is, nothing has changed.”

As many people came, 28% increase at the border in my administration; 31% in the last year, 2019, before the [coronavirus] pandemic in the Trump administration.

It happens every single, solitary year. There is a significant increase in the number of people coming to the border in the winter months of January, February, March. It happens every year.

3) Transparency at the Border

Biden waited longer than any other president in about 100 years to hold his first formal news conference.

His administration has also limited media access to the southern border detention centers.

NBC’s Kristen Welker pressed Biden on when journalists would have access to illegal-immigrant detention facilities on the border for unaccompanied minors, which the Biden administration has mostly denied.

Biden said, “I will commit to transparency as soon as I’m in a position to be able to implement what we are doing.”

Welker followed up: “Just to be clear: How soon will that be, Mr. President?”

Biden answered, somewhat tersely, “I don’t know, to be clear.”

Welker later pressed Biden, asking: “Do you bear responsibility for everything that is happening at the border now? I hear you talking about the past administration. You decided to roll back some of those policies. Did you move too quickly?”

Biden said Trump’s policies didn’t work and refused to apologize for his executive orders that changed them.

Biden promoted more ambitious goals as the United States climbs out of the COVID-19 crisis, pledging to double the original goal for vaccines and to open most schools.

About 1 million people were getting vaccines a day across the country before Biden took office, so the original goal was modest.

“I know it’s ambitious, twice our goal, but no other country in the world has even come close,” Biden said. “Not even close to what we are doing. I believe we can do it.”

5) Reopening Majority of Schools in 35 Days

Biden said he expects a majority of schools to reopen in the next 35 days, before the end of his first 100 days in office, though he said fewer than half are open now.

“I also set a goal before I took office of getting a majority of schools in K-8 fully opened in the first 100 days. Now, thanks to the enormous work done by our administration, educators, parents, local and state education officials, and leaders, a recent Department of Education survey shows that nearly half of the K-8 schools are open now full time, five days a week for in-person learning,” Biden said. “Not yet a majority, but we are really close. I believe in the 35 days left, we’ll meet that goal as well.”

Biden was asked whether he would consider maintaining tariffs on China and ban imports of goods made there with forced labor. Biden wasn’t clear on specifics, but laid out his goals for relations with China.

He called Chinese President Xi Jinping a “smart, smart guy,” but said he “doesn’t have a democratic—small ‘d’—bone in his body.”

He said he and Xi spoke for two hours after Biden’s election.

“I’ve known Xi Jinping for a long time. Allegedly, by the time I left office as vice president, I had spent more time with Xi Jinping than any [other] world leader had,” Biden said.

He said the United States is “not looking for confrontation” with China, but it would be a strong competitor. He added, “We’ll insist that China play by the essential international rules: fair competition, fair practices, fair trade.”

Biden took another shot at Trump, portraying his predecessor as weak when it came to dealing with China’s persecution of its ethnic minority Uighurs, and aggressive actions suppressing democracy in Hong Kong.