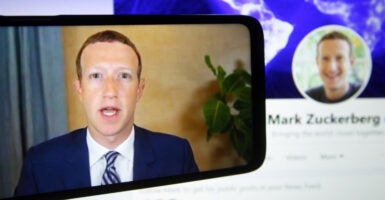 Lawmakers questioned CEOs of three of the world’s most powerful tech companies Thursday about censorship and false information on their platforms.

During the House hearing, lawmakers asked the three CEOs about their roles in shaping public debates, spreading “misinformation,” and potentially restricting Americans’ rights to free speech. Here are five takeaways.

A broad theme from Democrats during the hearing was that social media companies simply can’t be trusted to regulate their own platforms appropriately, especially after the Jan. 6 riot at the Capitol.

“You have the means, but, time after time, you are picking engagement and profit over the health and safety of your users, our nation and our democracy,” Rep. Mike Doyle, D-Pa., said.

The Pennsylvania Democrat said social media platforms have failed to clamp down on “misinformation” and this is problematic for the public.

“The power of this technology is awesome—and terrifying,” Doyle said. “And each of you has failed to protect your users and the world from the worst consequences of your creations.”

Some Democrats used the hearing to call for increased government involvement in controlling the type of speech that takes place on social media.

“The witnesses here have demonstrated time and time again that self-regulation has not worked,” Schakowsky said of Zuckerberg, Dorsey, and Pichai. “They must be held accountable for allowing disinformation and misinformation to spread.”

“Your business model itself has become the problem and the time for self-regulation is over,” Pallone told the three CEOs. “It’s time we legislate to hold you accountable.”

Legislators brought up the issue of Section 230, a part of U.S. communications law that prevents social media platforms from being held liable for content provided by their users.

Zuckerberg and Pichai agreed that more government regulations on social media might be necessary, but said it would be a mistake to get rid of Section 230 altogether.

“Regulation has an important role to play in ensuring that we protect what is great about the open web,” Pichai, the CEO of Alphabet Inc., the parent company of Google, said in prepared remarks. “We are, however, concerned that many recent proposals to change Section 230—including calls to repeal it altogether—would not serve that objective well.”

Facebook’s Zuckerberg went even further, proposing an overhaul of Section 230.

“Platforms should not be held liable if a particular piece of content evades its detection—that would be impractical for platforms with billions of posts per day—but they should be required to have adequate systems in place,” Zuckerberg said.

This could take the form of some kind of third-party oversight, he suggested.

3. What Information Can Be Regulated?

Twitter’s Dorsey agreed with his fellow CEOs that social media companies need to do a better job of controlling the flow of misinformation, and said “technology companies have work to do to earn trust from those who use our services.”

Dorsey cautioned that additional government regulation may harm smaller companies that don’t have the financial means to navigate a complex regulatory environment.

The Twitter CEO also warned that if the government became more heavily involved in regulating what can and can’t be said on social media platforms, it may make people think that they simply can’t question their governments at all.

Dorsey also admitted that his company made a “mistake” in shutting down the New York Post’s Twitter account and generally suppressing Twitter users from sharing the Post’s news reports on presidential son Hunter Biden’s overseas business dealings on the eve of the presidential election.

“It was literally just a process error. This was not against them in any particular way,” Dorsey said.

But Rep. Steve Scalise, R-La., pressed Dorsey on the issue of Twitter’s suppression of the Post’s reporting.

“[For] their entire account to be blocked for two weeks by a mistake seems like a really big mistake,” Scalise told Dorsey. “Was anyone held accountable in your censoring department for that mistake?”

“Well, we don’t have a censoring department,” Dorsey responded, but he didn’t say who at Twitter made the mistake.

In the past, Bucshon said, Americans had to grapple with the power of large, monopolistic companies, some of which were broken up by antitrust laws.

“I understand that these are businesses, they are publicly held companies. I respect that, I understand that, I’m a capitalist,” Bucshon said. “That said, these situations are a little different because there is some social responsibility here.”

Bucshon noted that over 92% of internet searches go through Google and asked Pichai what he thought of that.

“We understand there will be scrutiny here,” the Google CEO said. “We are a popular … search engine, but we compete vigorously in many of the markets we operate in.”

Rep. Cathy McMorris Rodgers, R-Wash., pressed the tech CEOs on the effect of social media on children in particular.

“Do you know what convinced me Big Tech is a destructive force?” McMorris Rodgers asked. “It’s how you’ve abused your power to manipulate and harm our children.”

The Washington Republican said that as a mother of three, she saw how social media can become that “destructive force” in their lives.