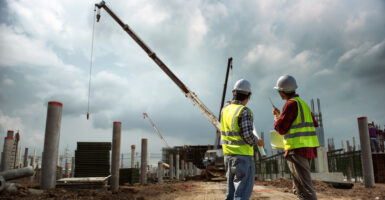 It appears that only a fraction of the spending proposed in a new $3 trillion to $4 trillion bill would go toward an already too-expansive definition of infrastructure. Pictured: Engineers discuss the progress of an infrastructure construction project. (Photo: Sornranison Prakittrakoon/ Moment/Getty Images)

The media were flooded Monday with news that the Biden administration is working on a colossal new $3 trillion to $4 trillion spending plan.

While full details are not available yet, the plan appears to be another left-wing grab bag of big-government proposals. Rather than stimulating the economy, it would stimulate bigger government while funneling unprecedented amounts of power and money through the hands of politicians in Washington.

All this comes on the heels of President Joe Biden signing into law on March 11 a badly flawed $1.9 trillion legislative package that was originally marketed as a COVID-19 response, but which was more focused on left-wing pet causes, such as bailouts for union pension plans and unnecessary handouts for state governments.

Just a day later, House Speaker Nancy Pelosi, D-Calif., released a statement calling for bipartisan work on legislation that would focus on infrastructure. While there were good reasons to question how beneficial or “bipartisan” such legislation would be, there was at least a chance of finding some across-the-aisle support.

But the potential for bipartisanship was quickly scuttled by news of the latest multitrillion-dollar plan.

It would be bad enough if the latest plan was just a big-spending infrastructure package. However, it appears that only a fraction of the new spending would go toward an already too-expansive definition of infrastructure.

Instead, most of the new spending and tax subsidies would go toward expanding the welfare state, including “free” tuition for community colleges, “free” child care, and other handouts that lack right-of-center support.

This would likely be the largest expansion of the federal government since the “Great Society” of the 1960s, even eclipsing Obamacare in scope.

Reports indicate that Democrats might attempt to split the plan into two bills—one focused on social spending that passes narrowly along party lines, the other focused on actual infrastructure aimed at winning bipartisan support.

House Republicans boycotted the annual Ways and Means Committee “Member’s Day” hearing on Tuesday in the wake of news reports on the plan, since they indicated that Democrats have already made up their minds to pursue as much spending as possible through the legislative procedure known as reconciliation.

Coincidentally, two respected nonpartisan groups released reports this week that show why Biden and Pelosi should pause their aggressive agenda.

First, the Congressional Budget Office published a paper demonstrating what would happen if a sustained increase in federal spending were coupled with big tax increases to pay for the spending.

While the analysis points to different long-term effects from different types of taxes, any tax-and-spend approach would lead to reductions in economic growth and personal income that are larger than the size of the tax hikes.

For example, the analysis found that having 10% more federal government would mean a 12% to 19% reduction in personal consumption.

And that’s a conservative estimate. Most estimates show tax hikes shrink the economy by two to three times more than the revenues they raise.

That doesn’t mean Congress could escape the consequences of a continued spending spree by simply adding to the national debt. The CBO paper cautions that that would not only impose significant costs and divert resources away from the private sector, but it also would be unsustainable and increase the risk of a devastating financial crisis.

Along the same lines, the Government Accountability Office released a sobering report on the nation’s poor financial health.

Now that Congress has passed a combined total of $6 trillion in legislation in the aftermath of the COVID-19 pandemic (more than $48,000 per household), it must quickly address the unsustainable growth of major benefit programs, such as Social Security, Medicare, and Medicaid.

Even before the pandemic struck, these programs were on a path to bankruptcy. Addressing these shortfalls in a way that is fair to both current retirees and future generations who will have to foot the bill is one of the greatest policy challenges facing the nation.

Unfortunately, Washington is exacerbating the problem by adding excessively to the national debt and potentially stunting economic growth with higher taxes.

While the Biden administration has repeatedly claimed that it will only seek to raise taxes on the wealthy, a government of the size that it’s seeking would require amounts of money that can only be generated through steep across-the-board tax increases on middle-class Americans.

Regardless of whether those taxes are levied tomorrow or in a few years, they would be an inevitable part of expanding the size and scope of the federal government.

Rather than continuing down the path of centralized power and socialism, lawmakers should recognize the costs associated with endless federal spending and chart a course toward financial responsibility and prosperity.

If they don’t, it will be the public’s duty to hold them accountable.