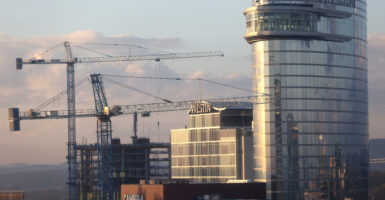 Three years after the Tax Cuts and Jobs Act took effect, Democrats in Congress are ready to roll back some of the most critical reforms.

The business tax cuts have been maligned as contrary to the interests of workers. In reality, the corporate tax cut succeeded at allowing new business investment, creating jobs, raising wages, and increasing the economy’s size.

The economic history of the 2017 tax cuts should lead policymakers who are intent on raising the corporate income tax, or repealing parts of the individual tax cuts, to question their convictions.

The tax cuts were intended to increase new investments in the U.S. by lowering the after-tax cost of buying new tools, equipment, and buildings. Those investments create new jobs, boost wages, and grow the overall size of the economy.

A new Heritage Foundation report chronicles how the tax cuts were a success on each of these margins.

New job openings surged in 2018, the year following the tax cuts, and about 83,000 more people voluntarily left their jobs for better opportunities at the end of 2019, compared with the pre-reform trend.

The beginning of 2018 also marked a significant increase in wage growth.

The accompanying chart shows that for production and nonsupervisory workers, nominal wage growth was 2.4% and declining in the years leading up to the tax cuts.

Following the tax cuts, wage growth for those workers increased to 3.8% by October 2019, according to data from the Bureau of Labor Statistics.

Faster earnings growth leaves workers with a higher overall wage level and makes them better off for years to come. A little more than two years after the reform, the average production and nonsupervisory worker was receiving $1,406 in above-trend annualized earnings.

Wages for all workers and measures of real wages show similar upticks.

Census Bureau data also show that real household income reached an all-time high in 2019, growing by $4,400 (a 6.8% one-year increase). Other analyses showed a “tectonic shift” in private paid leave availability and increases in other non-wage compensation in 2018 and 2019.

Following the tax cuts’ success, then-President Donald Trump embarked on an aggressive and destabilizing trade agenda, which resulted in tariffs that increased the cost of business inputs and consumer products.

Measures of trade uncertainty steadily increased through 2018, peaking in the third quarter of 2019.

Even with the countervailing increasing trade costs, measures of economic growth and investment remained above their pre-tax cut projections until the current COVID-19 crisis hit. The trade war seems to have masked the tremendous successes of the 2017 tax cuts.

The tax cuts have also likely made the COVID-19 economic crisis less severe, helping the economy bridge the 2020 disruptions. Reversing those pre-crisis, pro-growth policies risks weakening the foundation for a quick economic recovery.

The structural reforms that encourage higher business investment levels do not go away in a pandemic or during a trade war. Because of lower business tax rates and business expensing, firms that are investing in the current environment still invest a bit more than they would have otherwise.

When the pandemic subsides, existing incentives to invest, hire, and expand will help propel the economic recovery—unless Congress decides to increase taxes.

Political pressure from the left to increase taxes and ballooning deficits are already threatening tax reform’s gains. Beginning in 2022, the most pro-growth reform—full expensing—begins to phase out, and three years later, the lower tax rates for small businesses and individuals expire. Congress will need to act to preserve the gains from the Tax Cuts and Jobs Act.

However, without budget reforms that bring spending growth under control, businesses, families, and investors alike can expect tax hikes and slower growth in the future.

By rejecting unsustainable growth in government spending and making the 2017 tax cuts permanent, lawmakers could foster the conditions for a strong economy in the years ahead.