The Racist Sound of ‘Whiteness Is a Pandemic’ 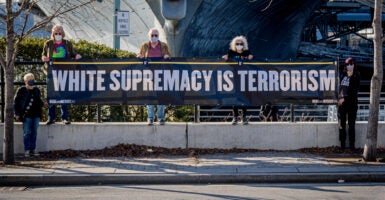 "Whiteness is a public health crisis. It shortens life expectancies, it pollutes air," writes Damon Young at The Root. Pictured: Members of the activist group Rise and Resist gather at the overpass to the Intrepid Museum in New York City on March 22. (Photo: Erik McGregor/LightRocket/Getty Images)

The Root is obviously a hyperbolically racial magazine, since its slogan is “The Blacker the Content the Sweeter the Truth.”

It’s not surprising that The Root frequently publishes writer Damon Young, author of the memoir “What Doesn’t Kill You Makes You Blacker.” We’re told he asked important and dramatic questions like “Will this white person’s potato salad kill me?”

Young’s memoir was honored as “required reading” by NPR and celebrated by Entertainment Weekly and The Washington Post, among others. He became a contributing opinion writer for The New York Times.

The paranoia overflowed from this self-described “professional Black person” on St. Patrick’s Day. Young posted a piece titled “Whiteness Is a Pandemic.” This was not a joke.

Whiteness is a public health crisis. It shortens life expectancies, it pollutes air, it constricts equilibrium, it devastates forests, it melts ice caps, it sparks (and funds) wars, it flattens dialects, it infests consciousnesses, and it kills people — white people and people who are not white, my mom included. There will be people who die, in 2050, because of white supremacy-induced decisions from 1850.

We can all imagine what might happen professionally to a writer if he were to pen this kind of foam-flecked copy but instead talk about “blackness.” It’d be denounced as virulently racist.

But to hate everything about the infestation of Caucasians is not defined as “hate speech.” It’s somehow “anti-racist.”

This article ended the same way:

White supremacy is a virus that, like other viruses, will not die until there are no bodies left for it to infect. Which means the only way to stop it is to locate it, isolate it, extract it, and kill it. I guess a vaccine could work, too. But we’ve had 400 years to develop one, so I won’t hold my breath.

We could develop our own paranoia that this sounds like a call to isolate and kill the whites like we would a virus.

Young’s news hook was the terrible mass shooting in Georgia, where a white man killed eight people, including six women of Asian descent. He blamed former President Trump and the Republicans, no matter what the unfolding evidence shows.

This kind of writing cannot be “fact-checked,” since it’s more performance art than journalism, like a one-man show at a radical-left coffeehouse. These are fighting words meant to inflame and draw attention to the writer. It’s no dialogue about “healing.” He’s not interested in that, anyway.

Last year, Young wrote a New York Times piece headlined “Yeah, Let’s Not Talk About Race.” Young overflowed with contempt for white people who try to tell him they loved his book and want to have a “Serious Conversation About Racism (SCAR),” as in getting “SCAR-bombed at Jiffy Lube.”

He wrote that these conversations are a waste of his precious time for a “professional Black person” such as himself. Raging against racism is his full-time job, so white sympathizers should not attempt to talk with him.

Young also employed a “Looney Tunes” analogy, writing: “I doubt the Road Runner, after a day of outrunning, outscheming and outlasting Wile E. Coyote, wishes to come home and explain coyote supremacy to the liberal coyotes who live in his neighborhood.”

Anyone who encourages this manic monologue is encouraging never-ending hatred and division.