Tax Incentives Are No Way to Drive Energy Innovation. Here’s Why. 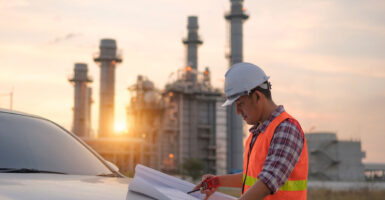 Congress creates new “temporary” subsidies to prop up politically popular, nascent technologies that claim to need government help, “just to get on our feet.” But these temporary subsidies seldom die. Instead, companies become dependent on them, and limp along in a wasteful and inefficient manner. (Photo: Witthaya Prasongsin/Getty Images)

The best ways to tame environmentally harmful emissions is to allow the private sector to innovate cleaner and more efficient ways to produce, distribute, and use energy.

Unfortunately, government subsidies, mandates, and other regulations largely fail to spur such developments, and instead bolster government-favored technologies.

The latest example of this is a  recent proposal from the House Ways and Means Committee to expand a long list of energy tax credits.

One of the credits extended in the package, the carbon capture tax credit, provides a cautionary tale for policymakers who hope to direct energy innovations with subsidies from Washington.

The carbon capture tax credit (which some call “45Q” after its tax code section) lowers the tax bill of energy companies based on how much carbon dioxide is captured and sequestered underground in special geological formations.

Companies receive $50 for every captured and sequestered metric ton of carbon dioxide, or $35 per ton if the captured carbon dioxide is used for enhanced oil recovery.

The process of capturing carbon that this tax credit seeks to incentivize is considered by some an effective way to mitigate the release of emissions from fossil fuels. But past examples of carbon capture and storage programs show that this technology is not viable, even with big subsidies.

As chronicled by Gizmodo, the Petra Nova coal plant in Texas—which was once held up by proponents of the carbon capture and storage process as a success story—just closed down.

Fueled by direct subsidies and generous tax credits, the plant’s owner, NRG Energy, was able to implement the carbon capture and storage system, making Petra Nova the only carbon capture coal plant in America. But it came at a cost.

The process to remove the carbon from the plant’s emissions “required so much energy that NRG made an entirely separate natural gas power plant … just to power the scrubber,” reported Gizmodo. The natural gas emissions were not captured or offset.

Ironically, the carbon dioxide pulled from the plant’s emissions was actually used to make more fossil fuels. Part of NRG’s deal with the federal government for running Petra Nova was gaining permission to transport the carbon dioxide scrubbed from burning coalto a separate oil field, where it was injected underground to help release more oil.

Time and again, Congress creates new “temporary” subsidies to prop up politically popular, nascent technologies that claim to need government help, “just to get on our feet.” But these temporary subsidies seldom die. Instead, companies become dependent on them, and limp along in a wasteful and inefficient manner.

In fact, some proponents of carbon capture have called 45Q a “make-or-break element” of the technology’s future success. That is a recipe for dependence.

Tax credits have also been issued for wind power, solar energy, electric cars, and biofuels, to name a few. Each of these credits were designed to get fledgling industries off the ground. As they began to expire, the industries pursued fierce lobbying to expand the subsidies or make them permanent.

Companies that do not receive any preferential treatment are also incentivized to lobby for tax subsidies simply to  level the playing field. The result is a hodgepodge of tax credits benefiting select technologies that members of Congress support, even if the support harms the country as a whole despite benefiting their districts or states. It is by no means an effective way to reduce carbon dioxide emissions, as many of the subsidies carry significantly high abatement costs.

Besides lost revenue, tax subsidies have many other significant hidden costs to American taxpayers. Because private capital—investment—is limited, technologies that do not receive subsidies appear to be more expensive, risky, or unpromising. Thus, the government discourages private investments in projects that lack the government’s blessing, but may actually be more commercially promising.

In other words: A dollar invested in a company that benefits from a tax credit cannot be invested simultaneously in another company. This creates opportunity costs where potentially promising but unsubsidized technologies may not receive investment.

Business models built around taxpayer-funded subsidies also distort the incentive that drives innovation. Preferential tax treatment reduces the necessity for an industry to make its technology cost-competitive, because the tax credit shields a company from recognizing the actual price at which its technology is economically viable.

The government should not prop up any energy source, and should instead allow competitive markets to meet America’s energy needs.