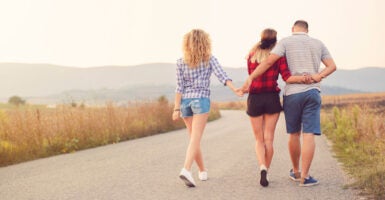 What could the left possibly want after same-sex marriage and transgenderism? Try polygamy.

The media laughed off groups like the Family Research Council when we warned about that 15 years ago. Now, a decade and a half later, with American parents in the fight of their lives over girls sports and city councils endorsing three-person relationships, it turns out we were right.

The LGBT’s fight was never about marriage—it was about every sexual and social norm.

Justice Antonin Scalia predicted as much in 2003. With prophetic insight, he pointed to the threat to state laws “based on moral choices” against “bigamy, same-sex marriage, adult incest, prostitution … adultery, fornication, bestiality, and obscenity” in his dissent from Lawrence v. Texas.

People thought he was being dramatic or exaggerating. But they don’t think so anymore. An astounding 20% of Americans now think polygamy is “morally acceptable”—tripling the number who held those beliefs when Scalia issued that warning.

America’s slippery slope is even icier now, with the news that another city council has officially recognized polyamorous relationships as an acceptable form of domestic partnership. Somerville, Massachusetts, was the first to do so last summer—followed by the Cambridge City Council this month.

In the same town that’s home to Harvard University, The Christian Post’s Brandon Showalter points out, a relationship of “two or more persons” who are not related and “consider themselves to be a family” are now considered legitimate partnerships in the eyes of the local government.

Massachusetts was the first state to usher in same-sex marriage, so it only makes sense that it would also be the first to tear down the barriers to open relationships too.

After all, if “love” and “consent” is all that defines a relationship, then proponents of incest, pedophilia, and group marriage can follow the LGBT playbook all the way to legitimacy.

“If my liberal friends recognize the legitimacy of free people who choose to form romantic partnerships with multiple partners,” Fredrik deBoer wrote in Politico right after Obergefell in 2015, “how can they deny them the right to the legal protections marriage affords?”

It was a surprisingly candid look at where this debate was headed. These days, the movement that promised to quit once it won marriage through the courts doesn’t bother pretending anymore. The only limits that exist are your own reality—unless you’re a Christian. And then it isn’t “live and let live.” It’s conform or be punished.

Even the American Psychological Association is fighting to give open relationships “protected legal status” because, as far as it’s concerned, monogamy is “bigotry.”

Once a culture rejects God’s design, basic biology, and thousands of years of civilization, there are no boundaries. Regardless of what the extremists say, they’ll never be satisfied until society acquiesces to what they want: a complete and total surrender of all moral standards.