Obama and Democrats: Filibuster for Me, but Not for Thee 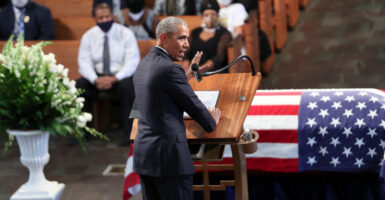 Former President Barack Obama politicized a memorial service for the late Rep. John Lewis, D-Ga., at the Georgia state Capitol in Atlanta on July 30 by calling for abolishing the Senate filibuster, even though he had supported it when he was in the Senate when it was under Republican control. (Photo: Alyssa Pointer/Agence France-Presse/Getty Images)

Senators of both parties often say they want to legislate “on a bipartisan basis.”

For more than 200 years, the Senate’s approach to handling legislation has had a built-in bipartisan incentive by giving the minority more influence. This distinctive feature of the Senate is being threatened today by those willing to permanently change the Senate to get more power.

Senate rules require that, while a simple majority can pass a bill, a supermajority of at least 60 must first vote to end debate.

The potential of a filibuster, which occurs when that threshold is not met, pushes the majority to deal with the minority. It’s one of those “checks and balances” that help keep too much power from ending up in too few hands.

During his four years in the Senate, for example, Barack Obama, D-Ill., voted two dozen times to filibuster bills he opposed. He voted to filibuster the National Defense Authorization Act in 2005, the Securing America’s Borders Act in 2006, and the FISA Amendments Act in 2008.

He also voted to filibuster bills to repeal the federal estate tax, to ease the regulation of leases for oil and gas exploration on federal lands, and to prohibit taking a minor across state lines to get an abortion.

When Republicans, then in the majority, considered terminating the filibuster in 2005, Obama defended it not as a partisan political weapon, but as a vital part of the legislative process. He encouraged his Senate colleagues to rise above the “ends justify the means” mentality that might lead to institutional changes with long-term implications just to gain some short-term political victories.

Every senator, Obama said, “knows that if the majority chooses to end the filibuster … the fighting, the bitterness, and the gridlock will only get worse.”

One party, “be it Republican or Democrat,” should not be able to “change the rules in the middle of the game so they can make all the decisions while the other party is told to sit down and keep quiet,” he said.

“That’s easy for you to say” is a tempting response since, at the time, Democrats were in the minority and using the filibuster to block both legislation and nominations. Talk, after all, is no cheaper anywhere than it is in Washington, D.C.

But Obama not only said that extended debate should not be limited then, but told senators that “one day Democrats will be in the majority again” and abolishing extended debate “will be no fairer to a Republican minority than it is to a Democratic minority.”

Suggesting that his defense of the filibuster was more about principle than crass politics, Obama took the position that Democrats should not try to limit extended debate the next time they were in the majority.

Well, here we are.

Democrats occupy the White House and control both chambers of Congress. The political planets have aligned, and now it is time to see whether Obama’s opinion of extended debate really does stay the same when the other party might use it.

Speaking at the funeral of Rep. John Lewis, D-Ga., last year, Obama called the filibuster a “Jim Crow relic” and said it should be eliminated so that Democrats could pass legislation they wanted. But didn’t Obama say that one party should not be able to change the rules “so they can make all the decisions while the other party is told to sit down and keep quiet”?

When he defended using the filibuster against legislation that he opposed, Obama said: “I urge my Republican colleagues not to go through with changing these rules. In the long run, it is not a good result for either party.” But when the filibuster might be used against legislation he supports, Obama now urges Democrats colleagues to do the opposite.

This kind of political opportunism brings to mind a senator’s counsel that talk of abolishing the filibuster “is more about power than fairness.”

“I believe some of my colleagues propose this rule change because they can get away with it, rather than because they know it is good for our democracy.”

Obama was right about that, too.