Earmarks Represent Corruption, Waste, and the Swamp. The Ban on Them Should Stay in Place. 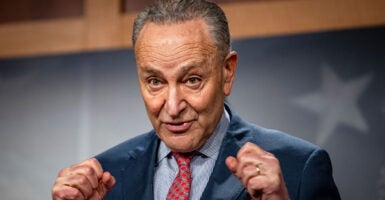 Even though earmarks promote corruption and waste, and were highly unpopular with voters, some members of Congress are now proposing a plan to bring them back. Pictured: Senate Majority Leader Chuck Schumer, D-N.Y., speaks during a news conference about using earmarks on Tuesday. (Photo: Samuel Corum-Pool/Getty Images)

After a decade-long ban, earmarks, the practice of Congress funneling your tax dollars to special interests, is set to make a comeback. Some members of Congress are now proposing a plan to bring earmarks back under the rebranded euphemism “community project funding.”

Conservatives have long found against the practice of earmarking federal funds for special interests. The practice took off in the 1990s and accelerated in the early 2000s—between 1994 and 2011, the number of earmarks each year increased by 282% to nearly 16,000.

A 2010 CNN poll showed that 79% of respondents described earmarks as “not acceptable.” This included 71% of Democrats and 89% of Republicans. A 2016 poll by Economist Group/YouGov found that “only 17 percent of respondents approved of the practice of earmarks.”

In response to the public outcry against the corruption and controversy surrounding earmarks, Congress banned them beginning in 2011. Bringing earmarks back, even under the seemingly wholesome name “community project funding,” would simply be a return to the bad old days.

The earmarking process has been described as “inherently corrupt” by those who have seen the process in action. The prospect of directing millions of taxpayer dollars toward special interests creates an incentive for lawmakers, lobbyists, and potential recipients of earmarked funds to behave in unscrupulous ways.

For example, several former members of Congress have been convicted of crimes related to earmarking, and many more have been implicated in unsavory schemes.

One former member of Congress, Rep. Duke Cunningham, R-Calif., even wrote out a “bribe menu” on congressional stationary showing how different levels of earmarks would cost. As a part of his scheme, in which he accepted $2.4 million in bribes, Cunningham lived on a yacht owned by a defense contractor, named the Duke-Stir after the congressman.

Another former member of Congress, Rep. Chaka Fattah, D-Penn., used earmarks to launder taxpayer funds through a nonprofit, which he used to pay off a $1 million loan he had illegally accepted.

Lobbyists also have gone to prison due to corruption related to earmarks. “Super lobbyist” Jack Abramoff plead guilty in a high-profile case for bribing members of Congress with campaign contributions, sports tickets, meals, and even a trip to Scotland for golf. Abramoff called the Appropriations Committee the “earmark favor factory.”

Paul Magliocchetti, who was described by Taxpayers for Common Sense as the head of the “earmark lobbying powerhouse PMA Group,” and his son both plead guilty for making illegal contributions to members of Congress in order to secure earmarks.

An independent review of a defense bill found that “60 percent of lawmakers who serve on the House Armed Services Committee received contributions from companies that also received earmarks in the Defense bill,” as noted by the business news publication Government Executive.

One study conducted by BusinessWeek and Columbia Books showed that for every dollar of lobbying spent by organizations seeking earmarks, they received on average $28 of taxpayer funding.

It’s no surprise that the potential of earmarks returning “has sent cautious jubilation down K Street,” according to Kate Ackley, who reports on lobbying, influence, and political money for CQ.

Corruption is just one of the reasons why the ban on earmarks should not be lifted.

On top of incentivizing unethical behavior, earmarks encourage wasteful spending. While not every earmark is the infamous “Bridge to Nowhere,” there are numerous examples of clear waste, such as $150,000 earmarked for the Sterling Opera House, in a town of 12,000 in Connecticut, or $300,000 earmarked for the world-famous Carnegie Hall in New York City, or $1 million earmarked for the Music Hall in Portsmouth, New Hampshire.

When federal funds are wasted on low-priority earmarked projects, important governmental priorities continue to require funding as well. This pushes the total spending level higher. It is no coincidence that legislation that includes earmarks tends to be expensive and expansive.

Even if earmarks only comprise a small percentage of total spending each year, that still amounts to billions added to the national debt, which will need to be recouped by future tax revenues.

Earmarks will distract members of Congress from the true priorities of the nation by giving them an avenue to seek political support by directing the taxpayers’ money to special interests.

There is nothing more emblematic of the proverbial Washington, D.C., “swamp” than earmarks. Congress should reject lifting the earmark ban.