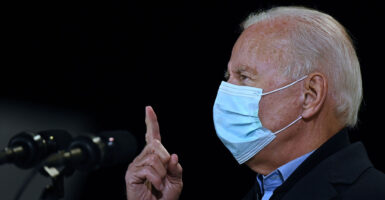 And it appears Genrich took it.

Worried that “thousands” of votes ran the risk of not being counted, David Kronig, the Democratic Party of Wisconsin’s director of voter protection, fired off an email to Green Bay officials the day before the presidential election.

“We’re checking in regarding the guidance that went live on the city’s website, we think this morning, that the drop box at City Hall will be open until 8pm tomorrow,” Kronig wrote to Vanessa Chavez, Green Bay city attorney, Celestine Jeffreys, the Democrat mayor’s chief of staff, and Amaad Rivera, Green Bay community liaison.

In the email, Kronig wrote that the Wisconsin Elections Commission’s “clear guidance” on state election law requires ballots to physically be at Central Count locations by 8 p.m. to be counted. The city had advised voters that absentee ballots had to be in the drop boxes by 8 p.m. on Election Day.

The state Democrats and Biden campaign staffers urged the city to strictly follow the Wisconsin Elections Commission’s guidance on the point.

“We understand that there is some ambiguity in the statute on this point and there is an argument to be made that being in custody of the city clerk suffices,” Kronig wrote, adding:

However, even if the city’s interpretation is entirely correct, we think that it is too big a risk to take. There are still thousands of unreturned ballots in Green Bay, and risking that some portion of those ballots might not be counted over an arguable legal interpretation just isn’t worth it.

In other words, think of all those Biden votes the city might be missing. In a close election in battleground Wisconsin, the partisan operatives didn’t want to take any chances. The message from the Democratic operative turned more urgent:

Against the backdrop of the [Wisconsin Elections Commission’s] guidance, I’d think there’s a less than 15% chance the city would win a lawsuit—with the end result that hundreds of thousands of Green Bay voters could be disenfranchised through no fault of their own.

That was just a bit hyperbolic. Green Bay’s population is just over 100,000, with some 60,000 registered to vote in November’s election.

—Close and lock City Hall drop boxes at 7 p.m., along with the rest of the city’s drop boxes.

—Place clear signs at each drop box upon closing directing voters to bring their ballots to the KI Center (the Central Count location).

—Station volunteers or poll workers at each drop box from 7-8 p.m. to redirect people to central count.

—Bring any ballots collected at 7 p.m. directly to central count “rather than passing through the Clerk’s office at City Hall.”

It appears the the mayor’s office complied.

In its Election Day edition, the Green Bay Press Gazette reported that ballot box drop-off would end at 7 p.m. in Green Bay.

“Amaad Rivera, community liaison for the Green Bay mayor’s office, said that ballot drop-off boxes will be locked and sealed at 7 p.m.,” the newspaper reported. “However, volunteers and signs will direct people who show up after 7 p.m. with an absentee ballot to the Central Count site at the KI Convention Center. They can also cast their ballot with the city clerk until 8 p.m..”

The Democratic Party’s involvement in election administration is concerning to state Rep. Janel Brandtjen, chairwoman of the Assembly’s Committee on Campaign and Elections.

“Why is Biden’s team having direct conversations with the clerks and the mayor of Green Bay on the day of the election?” the Menomonee Falls Republican said. “How can you tell me we’re carrying on fair and transparent elections?”

Brandtjen’s committee is investigating Green Bay’s election scandal, as well as the election activities in four other Wisconsin cities that received millions of dollars in grants from the Zuckerberg-funded Center for Tech and Civic Life.

Tanya Bjork: Strategic adviser for Biden campaign. Previously served as Wisconsin general election director for President Barack Obama’s campaign when he first ran for president in 2008. She also worked for former Wisconsin Gov. Jim Doyle, a Democrat, as director of federal affairs. And Bjork has worked for leftist groups like the Wisconsin Democracy Campaign and Common Cause.

Scott Spector: Senior adviser to the Biden campaign. Previously served as Baldwin’s campaign manager. “I couldn’t be more excited to see Vice President Biden’s campaign team comprised of some of the best Democratic talent Wisconsin has to offer,” Baldwin said in a June statement released by the Biden campaign. “Scott Spector and Danielle Melfi led my 10-point re-election campaign and their unparalleled knowledge of the Badger State is exactly what the Vice President needs to win Wisconsin in November.”

David Merrick is a contributor to Wisconsin Spotlight.