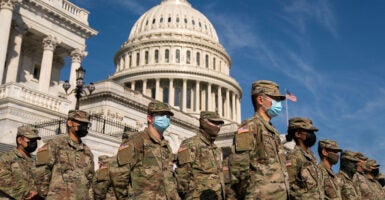 Members of the National Guard from California stand on the steps of the House on Capitol Hill March 11, 2021, in Washington, D.C. (Photo: Kent Nishimura/Los Angeles Times via Getty Images)

National Guardsmen stationed at the Capitol building should instead be sent to address the “humanitarian crisis” at the southern border, a Republican congressman said Tuesday.

The Guard Our Border Act would reassign 95% of the National Guardsmen stationed at the Capitol building to the southern border since the U.S. Capitol Police said Monday that there are “no known, credible threats” to the complex, North Carolina Rep. Greg Murphy said in a statement.

“Our National Guard were formed to respond to states of national crisis in this country. The Capitol Police have acknowledged that there is presently no credible threat to our nation’s Capitol Building. Yet, because of this administration’s new policies, there is a national security and public health threat at our southern border,” Murphy said in the statement.

Yet the Biden Administration refuses to acknowledge the crisis at the border. https://t.co/JUwfHZvc3a

Around 2,300 National Guard troops are scheduled to remain in Washington, D.C., through May 23 despite that Customs and Border Protection is struggling to manage the increasing number of arrivals, according to Murphy.

Over 100,000 migrants were encountered by CBP in February, including nearly 20,000 immigrants traveling as a family and over 9,000 unaccompanied minors, according to the agency.

“The Biden Administration has refused to acknowledge this crisis but have asked for assistance from [the Federal Emergency Management Agency]. Even civilian volunteers have been requested. Keeping the National Guard in D.C. is a misdirection of their mission purposed by political posturing and a complete waste of taxpayer money,” Murphy said.

“If our men and women in the National Guard are going to be deployed to provide assistance with a domestic issue, then the real issue is at our southern border and not in D.C. Congress should direct them immediately to help secure our border and provide humanitarian aid to those in custody,” Murphy added.

Over 4,200 migrant children remained in CBP custody Sunday, including 3,000 who were held over the legal limit of 72 hours, according to Murphy.

The Capitol Police and CBP did not respond to The Daily Caller News Foundation’s request for comment.