With New Director at Helm, Time Is Ripe for World Trade Organization Reform 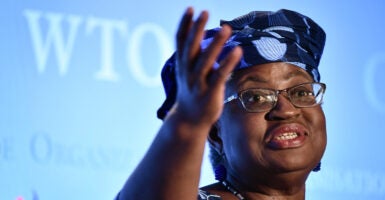 In a phone conversation last week, Vice President Kamala Harris and the new director-general of the World Trade Organization, Ngozi Okonjo-Iweala, concurred on the need to reform the Geneva-based global trade organization.

Indeed, upgrading the WTO is a priority issue for the U.S. and its trading partners, particularly the European Union, with which America has the world’s largest trade and investment relationship.

Addressing the WTO General Council immediately after taking office on March 1, Okonjo-Iweala called on members to “do things differently” to achieve reforms necessary to keep the WTO relevant. She further noted unambiguously, “It cannot be business as usual.”

As the new head of the WTO recognized, reform of the international body is past due. Last year marked the 25th anniversary of the establishment of the organization, and the task of upgrading the WTO can be put off no longer.

In practice, the WTO is not a global governing body that directs flows of goods and services around the world. Its actual role is far more limited—as a forum for negotiation and a venue for the resolution of disputes between its members.

The global trade body has no independent power to enforce its decisions. Nonetheless, the WTO has contributed to the strength and stability of the global economy, helping to boost trade growth, resolve numerous trade disputes, and support the integration of more countries into the trading system.

The WTO has also proven to be a useful tool for the United States and the EU in promoting fair and mutually beneficial trade among the organization’s members. American and European businesses and consumers have benefitted measurably from voluntary participation in its negotiations and mediation exercises.

To reinforce the benefits of rules-based free trade, the U.S. and the EU must work together to resist protectionist measures stronger than ever. It’s clear that the U.S. has significant causes for complaint about EU protectionism, just as the EU does about U.S. protectionism. The wrong way for a country to fight protectionism is to engage in more protectionism of its own.

To that end, particularly with a new director-general in place, 2021 is the year to make greater use of the WTO by proactively encouraging reform. In encouraging better and more effective functioning of the WTO, the U.S. should consider practical ways to improve the WTO in close cooperation with its trade partners around the world.

That’s an area in which many member nations think that the WTO has had little impact, and reforms are urgently needed to prevent Chinese abuses.

The WTO has much to offer in this and other areas if the U.S. and the EU work more strategically and practically to reform and support the institution they helped create 25 years ago.